The final frontier in constructing a coherent view of cosmic history is to locate and study the earliest galaxies which formed in the first few hundred million years after the Big Bang.  This moment, when the Universe was first bathed in starlight, is sometimes referred to as `Cosmic Dawn’ or `First Light’.  It is thought such early galaxies, whose stars contained no chemical elements other than hydrogen and helium whose nuclei were synthesised in the Big Bang, produced copious amounts of ultraviolet radiation. This radiation photo-ionised the hydrogen in deep space - a process called `Cosmic Reionisation’. Our group is using both space and ground-based telescopes, supported with numerical simulations, to explore this largely uncharted era.  Key questions include: when did first light occur and was the population of early galaxies responsible for cosmic reionisation which completed at redshift 6, about 1 billion years after the Big Bang.

Most of our knowledge about the abundance of galaxies earlier than redshift 6 has come from deep imaging with Hubble Space Telescope including harnessing the additional magnifying power offered by the gravitational lensing effect of foreground clusters of galaxies. The census of galaxies so determined indicates a rapidly-declining population with increasing `look-back time’ out to when the Universe was about 500 million years old at a redshift of 10.

Although directly witnessing when first light occurred may not be possible until the launch of James Web Space Telescope (JWST) in March 2021, our group has provided two independent estimates of when it occurred. The first exploits the fact we can determine the ages of stars in early galaxies using the combination of photometry from Hubble and the Spitzer Space Telescope, aided by spectroscopy from the ESO Very Large Telescope and the ALMA millimetre array (Hashimoto et al 2018, Figure 1). For one of the most distant known galaxies at a redshift 9.11, we find evidence for stars whose age is already 300 million years old. This suggests `first light’ occurred at a redshift of about 15, beyond our current observational horizon, when the Universe was only 250 million years old. 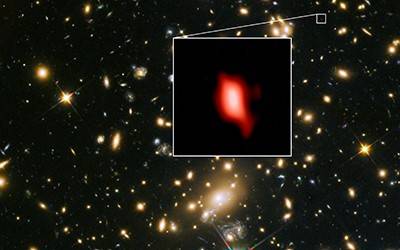 Figure 1: A redshift 9.11 galaxy (zoom) gravitationally-lensed by the foreground clusters MAC1149 reveals both young and old stars. The latter are estimated to be 300 million years old. At this redshift the universe is 550 million years’ old which implies the galaxy first formed its stars when the Universe was only 250 million years old.

A second route to probing beyond our current observational limit is via the detection of interstellar dust. This dust comprises micron-sized spinning grains of silicate and other metals which are ejected when dying stars explode as supernovae. As the dust is heated by young stars, it glows in the far infrared and can be detected by ALMA.  By measuring the mass of dust in early galaxies we can estimate how many supernovae exploded before the epoch of observation. This can, in turn, be used as an age indicator. We detected 6 million solar masses of dust in YD4, another lensed galaxy at a redshift 8.38 boosted by the foreground cluster Abell 2744 (Laporte et al 2017, Figure 2). Analysis of this data broadly confirms the epoch of first light concluded above. 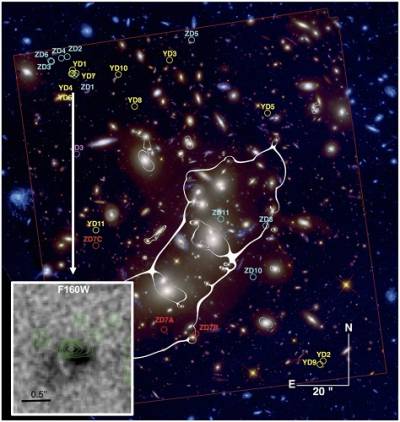 Figure 2: The detection of dust (green contours) in YD4 (inset), a galaxy lensed by the cluster Abell 2744 at a redshift of 8.38. As this dust is the product of supernovae produced by earlier star formation, the amount of dust provides another route to probing the galaxy’s age and hence when first light occurred.

Cosmic reionisation is a major phase transition in the Universe and understanding how much ionising radiation typical star-forming galaxies produce is key to understanding how it happened. The influence of young galaxies on the intergalactic hydrogen can be gauged by comparing their output the degree of ionisation in the proximate intergalactic medium measured by absorption line spectroscopy of hydrogen probed by background quasars (Kakiichi et al 2018, Meyer et al 2019). Such analyses involve detailed simulations of the leakage of ionising radiation from galaxies and its effect on gas clouds of hydrogen.

These are exciting times to explore the final frontier as the imminent launch of JWST will transform the capabilities, including the possibility of direct detection and studies of the earliest galaxies. Now that we have some idea where they lie in cosmic time, we will be following this field intensively in the next few years.

Further information is on our group web page  https://www.ucl.ac.uk/astrophysics/research/cosmology/first-light and you can also email Professor Richard Ellis (richard.ellis@ucl.ac.uk).