A research output from the Early Rice project at the UCL Institute of Archaeology is the joint recipient of the Ben Cullen prize from Antiquity for 2019. 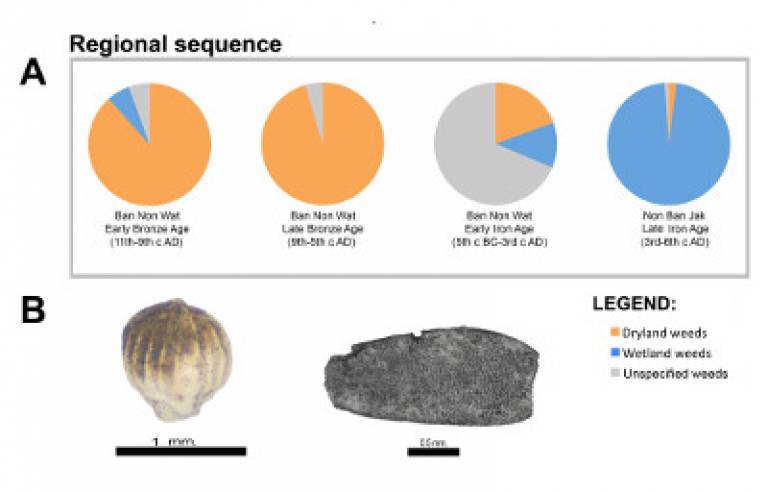 The journal article entitled 'Social responses to climate change in Iron Age north-east Thailand: new archaeobotanical evidence' was published last year by a co-authorship team led by Cristina Castillo, together with Katie Miller (MSc Environmental Archaeology, 2014) and Dorian Fuller from the Institute, as well as collaborative partners, to whom congratulations are given.

New evidence from archaeological investigations in north-east Thailand shows a transition in rice farming towards wetland cultivation that would have facilitated greater yields and surpluses. This evidence, combined with new dates and palaeoclimatic data, suggests that this transition took place in the Iron Age, at a time of increasingly arid climate, and when a number of broader societal changes become apparent in the archaeological record. For the first time, it is possible to relate changes in subsistence economy to shifts in regional climate and water-management strategies, and to the emergence of state societies in Southeast Asia.

The Ben Cullen Antiquity prize was founded by Ian Gollop in 1996 in honour of Ben (1964 – 1995) who was a promising young archaeologist when he died unexpectedly . His work was published posthumously by Steele et al. (2000) Contagious Ideas: on Evolution, Culture, Archaeology and the Cultural Virus Theory. Selected Writings of Ben Cullen.

The prize-winning articles are available to read for free via the Antiquity website.