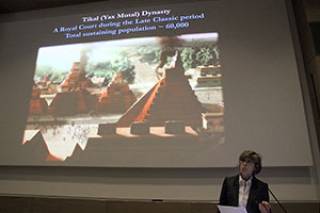 In the Americas, Pre-Columbian political forms tend to be analyzed from an apocalyptic perspective that arcs from emergence to tragic but inevitable collapse. Timing of the many and varied examples of political dissolution rarely coincided with European incursions. Nonetheless, popular understandings of the Pre-Columbian world often conflate 16th-18th century European wars of conquest with the collapse of earlier Indigenous polities. The 9th-century collapse of divine rulership in the southern Maya lowlands provides a relevant case in point and hints at a troubling entanglement between Colonial triumphalism and Indigenous failure to repel unwanted immigrants.

I consider how we might come to understand the workings of archaic states in the Maya region and elsewhere if we untangle them from morally laden apocalyptic tales. I further examine how the colonization process demanded this entanglement as well as a simplification of political complexity in occupied regions. This deeply embedded way of understanding what Europeans called “the New World” permeates much of 19th and 20th century archaeology.

In radically departing from this paradigm, we consider a social proclivity towards political experimentation. I use the term experimentation to mean a test or trial to see if something works. Because political forms codify relations of power, they are notoriously fragile and often ephemeral constructions, unlike social or religious forms. Likewise, by nature of their social construction, political arrangements tend to be finite, with a beginning and an end. Resurgent political entities often fine-tune the more fragile aspects of earlier ones. In this sense, political forms parallel the structure of scientific experimentation. Archaeology—although not an experimental science—may be thought of as the study of political experimentation. This framework is proposed for the Maya region during pre-Columbian times and may also be a good fit with the new age of populism in which many nation-states currently find themselves.

The Gordon Childe Seminar 2017: Archaeology and Heritage: Clashes and Compatibilities