In one-year of fieldwork in Cambodia, I focused on the changing nature of citizenship. I traced the historical development of Cambodia’s socio-political events from after the French protectorate period until the present (1960s-2010s). I explored how Cambodian citizenship has evolved over time and through various periods of political calamity. In particular, I sought to address the relationship of visual representation to citizenship. I collected and examined photographs and visual archives to establish an empirical basis for theorizing the relationship between images and citizenship over this long period. As Cambodia evolved politically, so did the way in which images informed citizenship. As the diagram below illustrates, there is an elemental dynamic in the relation between time, citizenship and photography. We can see that the number of photographs or images fluctuated as the polity became unstable. During the civil war, citizenship was largely erased as the state was in a fragile condition. After the conflict, the number of photographs and other visual materials increased. In the era of smartphone and social media the number of photographs increases exponentially, so that images outnumber the population 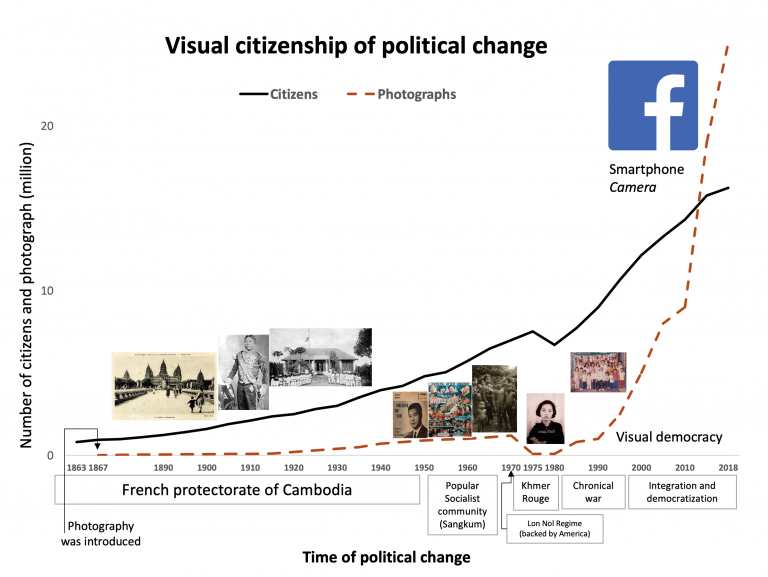 As shown in the diagram, there is a fundamental democratisation of the image. Citizens can increasingly access cameras, smartphones and other tools. Previously, these were only accessible to well-off urban communities. Regionalisation and technological development resulted in much greater access to photography. Citizens increasingly represent themselves and their own desired identities which are shared on social media. They become members of a community that grows through the recognition of one another through visual media, and they immerse themselves in a new imagined community online. Cambodian people enact their citizenship and envision their socio-political hopes irrespective of the role of the state through these new media. However, by making themselves publicly identifiable, these communities jeopardise themselves in relation to the current state and its censorship and political controls.

Here are some photos from my fieldwork. 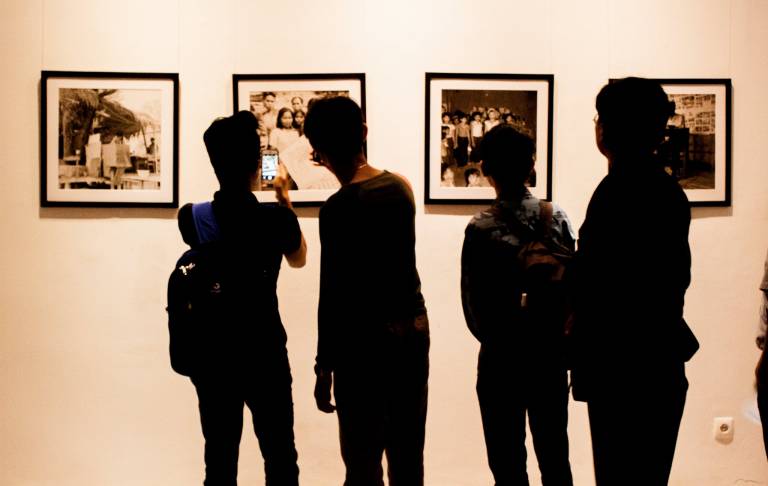 I completed my fieldwork by participating in the annual ‘Photo Phnom Penh festival’ which took place from 05 Oct to 05 Nov 2018, I co-curated the photo collection of Michael Vickery, an American historian, who began working in Cambodia in the 1950s. Taken in the rural communities of indigenous people, his photographs from the 1960s provide comparative perspectives on the differences between the urban and rural villages, in terms of livelihoods, culture and identities, a period during which Cambodia itself was claimed as one of the most prosperous countries in Southeast Asia. During the exhibition, I provided a number of interviews to local news media.

Photos from the forgotten Cambodian countryside (What’s on Phnom Penh)

PHNOM PENH - A child with a half-shaved head stares straight at us with a challenge in his eyes. Another group of children, one smoking a pipe, crowd around and stare, open-mouth and plaintive, as if they are about to break into shouts. A woman points a gun straight ahead, seemingly just a hair to the left of our heads.

Worth a thousand word (Khmer Times)

This arduous task has resulted, with the collaboration of anthropologist Dr. Sokphea Young and the PPP, in a pioneer exhibition of selected photos at Bophana Center, as part of the Phnom Penh Photo Festival.

Cambodia in the 1960s (in Khmer), Radio Voice of America

Other presentations and engagement