Edward Christie (History of Art) coordinated a UCL Anthropocene seminar entitled Cultural Ecology. Here, he shares his reflections on the discussions as the series comes to a close.

Cultural Ecology: Galvanising Climate Action Across the Arts was a series of eight online seminars which brought together activist-academics working across the arts to interrogate the following question: ‘How might cultural researchers galvanise more urgent and effective responses to the climate crisis to remedy the severe inadequacy of the actions currently being set into motion by governments and corporations’. 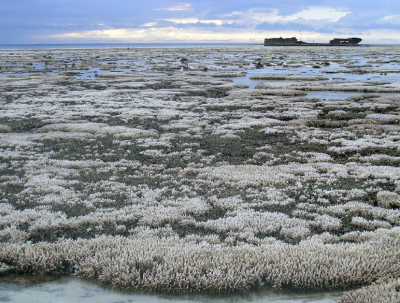 The anthropologist Julian Steward (1902-1972) coined the term ‘cultural ecology’ to describe the ‘ways in which culture change is induced by adaption to the environment’.[1] Developing this definition in the light of discourse on the Anthropocene, and referring more specifically to ‘culture’ as expressly manifested in artistic works, this seminar series conceived of ‘cultural ecology’ as an interdisciplinary banner to unite and mobilise researchers who share the conviction that radical and widespread cultural change is vital to combat the climate emergency.

In this way, ‘cultural ecology’ was deconstructed and came to be understood in terms of the phrase’s two literal denotations:

When considered in tandem, these two meanings highlight the significant potential of artistic works—as focused expressions of broader cultural conditions—for inspiring the development of more sustainable ways of being.

Intending to encourage a more coordinated cultural response to the climate crisis, the webinars spotlighted researchers based at institutions across the globe who collectively represented a broad range of the arts, including: curating, literature, art history, fashion, dance, art practice, music, and architecture. Contributors were chosen who prioritise eco-political praxis and embrace exchanges with scientists and activists.

Opening the programme, Dr. Colin Sterling (University of Amsterdam) discussed the ‘Reimagining Museums for Climate Action’ project: an international design and ideas competition and associated exhibition to be hosted at Glasgow Science Centre ahead of and during COP26.

Next, Prof. Florian Mussgnug (UCL, SELCS) gave a lecture on ‘Ecologies of Grief: Narratives of Covid, Climate and Care’ which explored twenty-first century narratives of loss and mourning to call for an ecological re-thinking of grief and the literary genre of elegy.

This led to Prof. Andrew Patrizio’s (University of Edinburgh) talk ‘The Disappointing Apocalypse: Visualising Climate in Art Since the 1960s’ which was co-hosted with the Past Imperfect seminar in UCL’s History of Art Department and considered the complex relationship between the idea of eco-apocalypse and visual art practice since 1960

Afterwards, Prof. Kate Fletcher (London College of Fashion) and Prof. Mathilda Tham (Linnaeus University) shared their concept of ‘Earth Logic’—a radical framework for sustainability grounded in systems thinking that has been applied in a number of contexts, especially in the fashion sector, since its launch at London Fashion Week 2020.

This flowed into a seminar led by choreographer, dancer, and educator Subathra Subramaniam who shared her experiences of working with dance to inspire climate action in collaboration with youth activists and scientists. The talk was titled ‘Choreography as Climate Action: Inspiring the Environmental Movement Through Dance’.

Following this, Dr. Ignacio Acosta gave a lecture titled ‘Archaeology of Sacrifice: Mobilising Collaborative Artistic Practice Against Extractivist Violence’, which centred on the artist’s recent video installation that recounts the discovery of a Celtic sacrificial site in a limestone and marl quarry in Switzerland to unveil how the notion of sacrifice has transitioned from ancient sacred rituals to its contemporary meaning within extractive capitalism.

The penultimate seminar welcomed Dr. Mike Edwards of Sound Matters—an organisation that uses sound, and the art of listening, to address environmental challenges such as climate change. By recounting his personal journey in music-making and climate change research, Mike explained why he thinks sound and listening hold the key to finding new ways of imagining futures where the human and more-than-human worlds can flourish.

Finally, Prof. Peg Rawes (UCL, The Bartlett School of Architecture) closed the series with a talk titled ‘Architectural Relations in a Climate Emergency’ which examined human and nonhuman life as ‘matters of concern’ for contemporary architectural thinking in the year when the UK hosts the UN COP26 in Glasgow.

Woven through these events were engagements with important sub-questions including:

Central to the responses to all these questions which emerged during the seminars was the belief that the transformation of modern subjectivity is the most fundamental and essential requirement if we are to effectively combat the climate crisis, and the conviction that the arts are ideally placed to inspire this change.

Unfortunately, it is evident that, without intervention, governments and corporations will continue to fail to mobilise the change that is required to adequately counteract the dramatically worsening impacts of the climate crisis. Despite the widespread adoption of the Paris Agreement in 2016 which aims to limit global warming to ‘well below 2, preferably to 1.5 degrees Celsius, compared to pre-industrial levels’,[2] average global temperature continues to rise dramatically, and we are currently on track to exceed 1.5C as early as 2026.[3] Alarmingly, although these statistics are common knowledge, the trajectory of the status quo continues more or less uninterrupted.

Clearly, governments and corporations need to be shaken up. Although the United Nations increasingly promotes culture as a ‘driver and enabler of sustainable development’, the intergovernmental organisation continues to rely predominantly on data-driven assertions grounded in modern, capital-based conceptions of value and progress, and is yet to truly embrace principles that are at the core of progressive artistic research including critical thinking, expression, and experimentation.[4] These strategies are vital to highlighting and challenging the causes of the climate crisis, raising awareness of its multitudinous effects, and forging the development of alternative modes of existence centred on climate justice. It was recently stated that ‘climate change is the greatest threat we have ever faced.’[5] This implies another assertion: there has never been a more urgent time to be a cultural researcher. A seminar series can’t single-handedly change the world, but nonetheless I hope these events inspired discussions, collaborations, or ideas that will lead to further actions that support the realisation of a more socio-environmentally harmonious future.

Recordings of the Cultural Ecology seminars can be found here.