Why was another EPICure Study Needed?

The way doctors and nurses look after very tiny babies changed considerably since the original EPICure study started in 1995. We could see that more babies seemed to be surviving by 2006 compared to 1995. We thought it is important to document this properly and to see if the children born a decade later had similar problems to those born over 10 years previously.

As part of the new EPICure studies we undertook to study all babies born in England at 26 weeks of gestation or less (14 or more weeks premature) during 2006.

The new study told us how effective advances in Neonatal care since 1995 have been. It also told us more about the lung development of very tiny babies. The professional approach of different baby units was considered. This built on the knowledge gained through the hard work of the EPICure families and children in the EPICure 1995 study.

The EPICure 1995 studies told us that babies who were well in the hours shortly after birth often did better in the long term. The EPICure 2006 (EPICure2) studies collected more information than was obtained in 1995 about how sick these tiny babies were in the first few hours after birth .

EPICure 2 collected information on all babies born in England during 2006 between the gestational ages of 22 weeks and 26 weeks + 6 days. Labour wards within the chosen geographic area recorded any birth between these gestation times and this information was sent to the EPICure 2 team. A small section of the umbilical cord attached to the placenta was examined under a microscope to look for evidence of infection or inflammation occurring in the womb before the baby was born.

Information on babies and mothers after birth was collected by an organization called CEMACH, as part of our national statistics. We worked with the people responsible for this to adapt their collection system during 2006 so that we could repeat EPICure. Two forms were completed by the people who looked after these babies on Neonatal Units. One told us what happened during the first 28 days of life and the second covered day 29 until discharge from hospital.

EPICure 2 included more details about mothers and their pregnancies than EPICure 1995 did. To do this we obtained additional help from obstetricians, lung specialists, pathologists as well as statisticians, epidemiologists and neonatologists.

This part of EPICure 2 looked at survival after birth at extremely low gestational ages (22 to 26 weeks of gestation) and described what happened to the babies when they were first in hospital.

So far we have come up with some important findings, particularly when we compare what happened in 2006 with what happened in 1995 when we did our first study.  The main conclusions in our first main paper (Costeloe et al BMJ 2012) are:

We have other analyses underway:

This part of EPICure 2 studies the development of children after extremely preterm birth.  We followed children at 2 years of age by parent-completion questionnaire and then 12 months later with a formal assessment.

The parent questionnaire at 2 years was returned by 523 parents (just over 50%).  We were particularly interested in development and behaviour. Parents told us about the stages of development and language and completed a behavioural questionnaire – the modified checklist for autism or m-CHAT.  This was not because we think extremely preterm children have autism but to see whether it could be used in such a group of infants as is often advocated.  In fact we found that because development in the first 2-3 years is much slower in extremely preterm child many more children screen positive than would be useful and it probably isn’t the best test to use (see Moore et al Dev Med Child Neurol 2012).

We managed to see 576 children at around 3 years. Part of the reason this was so low was due to the changes in research permissions in England, making it really difficult to arrange appointments in hospital, which we had done previously in EPICure. We also had problems in tracing families who had moved.  Although these problems are now to some extent resolved we had to stop seeing children because the test we were using was not useful for older children.  Hospitals gave us information on a further proportion so that in the end we had information on 75% of children.

Before we analysed the information that had been collected we had to work out how the developmental test scores related to the older test used in EPICure.  We worked out a way so that the test scores in 2006 born children could be compared to those in 1995 – we have published this as well (Moore et al J Pediatr 2012)

In the third paper from the outcome study we describe changes from what was found at a similar age for the EPICure babies born in 1995. We were able to make some important observations:

Figure 1: proportion with severe, moderate and mild impairments at follow up at an average of 3 years by gestational week at birth (percent with severe impairment is shown) 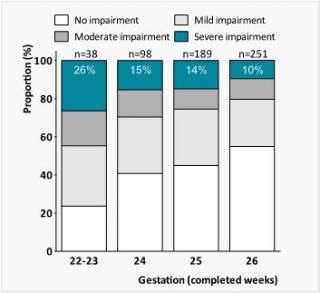 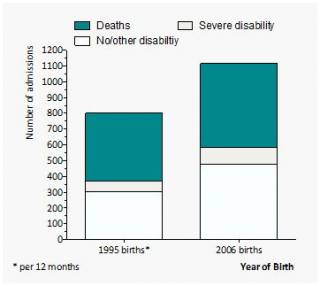 We are currently seeking funding to see a sample of EPICure 2 children at Junior School age, this is important to confirm the findings at two to three years.  Further information will be posted as it comes available. 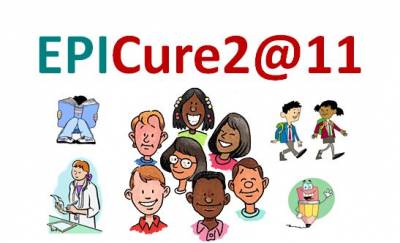 EPICure2@11 is the latest phase of EPICure2 – the study of health and development following birth at 26 weeks of gestation or less in 2006 across England.  As in the original 1995 EPICure Study, we want to find out how the children born in 2006 are growing up now they are around 11 years of age. The Medical Research Council continues to fund this exciting project.

EPICure2 identified over 1000 children who went home from neonatal units in that year.  It will be difficult for us to attempt to meet all the children so we will be contacting only those who were born in the London area and around the Midlands to invite them to take part in an assessment. However, we will keep every family informed of the progress and results of the study.

We are hoping to visit as many children as possible in their schools to minimize any disruption and travelling. This also gives us an opportunity to visit a classmate at the same time, which is important for us to be able to understand the results of our assessments, as well as finding out how the children are getting on at school.

The study will continue to be organised from UCL in London, but we have set up a second centre at the University of Leicester, led by Dr Samantha Johnson, from which to base visits for the children who live around the Midlands. At each site (London and Leicester) we have two researchers who will carry out the visit, a health professional and a psychologist.  They will visit the school for one school day and carry out a range of assessments.  The children taking part will go to registration as usual and have the same breaks as they would normally have so they can spend time with their friends. At the end of the study we will provide parents with a short summary report of their child’s assessment results. Sometimes parents find it helpful to share this with the school or their doctor.

We are very grateful to all the children and families that help us with our research.  The information helps us understand how neonatal care affects the way children grow up and develop. Results from the previous phase of the EPICure2 Study have already been used to inform medical treatment for women and children facing extremely premature birth.

You can find out more about our researchers on the meet the team page below.

There are two groups of things we wish to study – both of which may be related to premature birth – you can find out more by clicking on the links  below:

More details on how the study will unfold and the timelines for everyone involved in the study can be found on the following pages:

Information for those who joined EPICure2 in 2006

If you have any questions or would like to find out more please do not hesitate to get in touch, details of how to do this can be found on our contact us page.