Anthropology is the comparative study of human societies in order to understand what it means to be human.

Other disciplines, such as sociology for example, tend to ask people about themselves via interviews, focus groups and surveys. But anthropology suggests that most people cannot say why they live their life in a particular way. As a child we learn to conform to the behaviour of those around us which may make one person 'typically' south Italian, for example, or 'typically' north Chilean.

To explain these cultural differences, anthropologists enter a population as outsiders: women studying men, academics studying farmers, a Romanian studying Italians. We do not see culturally learned behaviour as 'natural' since we study the way social practices, such as the organisation of the family, vary in different societies.

Anthropology is not just the study of less developed societies, it is the comparative study of all human societies.

Anthropologists try to understand people from the viewpoint of those being studied. Imagine a person whose opinions you disagree with and who disagrees with yours. Even if you still dislike these views can you come to understand how and why someone might have them?

Ethnography is a means not an end. Only by comparison, generalisation, and analysis can we use these extremely local findings to reach general conclusions about humanity.

To gain a better understanding of what it is that anthropologists do, take a look at the book 'Introducing Anthropology'. 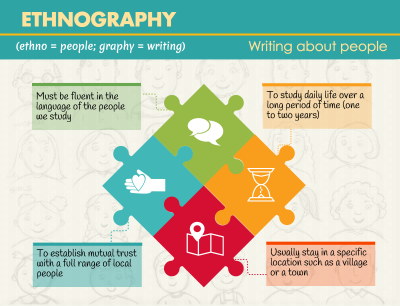 The ideal of ethnography is to study the entirety of people's lives: their work, family relations, religion and habits. Since people experience these things simultaneously, our approach is holistic and true to how people actually live.

Anthropologists don't just ask people about what they do, they try to directly observe behaviour and participate in people's lives. For example they might interact with them on social media, help with child care, or take a short term job in a local shop.

Why did we spend 15 months in each fieldsite?

1) To observe as many different aspects of people's lives as possible, with enough repetition that we have a sense of a typical range of behaviour.

2) To get to know a range of people of different ages, classes, genders, and other distinctions.

3) To know people well enough and gain their trust so our evidence covers private behaviour, such as WhatsApp conversations, and not just public behaviour.

We recognise that every person in each place is unique, also men may differ from women, older people from younger. We try to balance stories and generalisations, which are always a compromise with that uniqueness. So in this website, each discovery is claimed as a generalisation but is followed by comments from the fieldsites which challenge this by noting the specific situation in each area.