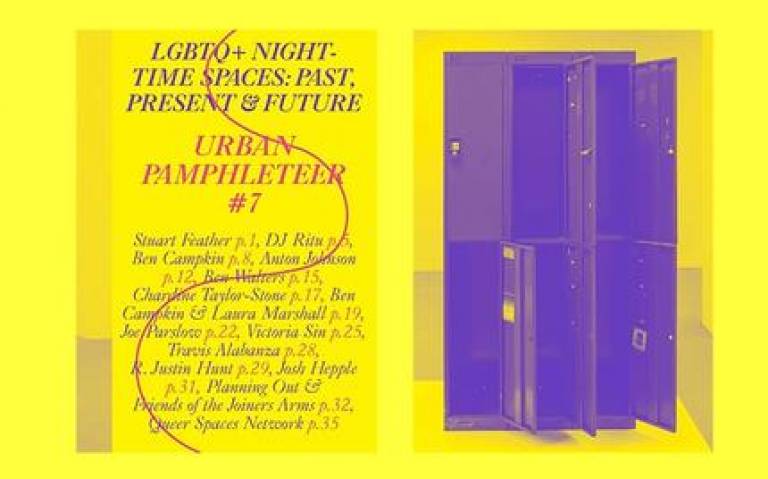 Urban Pamphleteer is a collaboration between UCL Urban Laboratory and Central Saint Martins Graphic Communication Design. Each issue addresses a theme and set of questions that have recently surfaced in urban debate, across public, academic, professional, policy, activist, artistic and other communities. The series sets out to frame contemporary challenges historically, and to bring together a diversity of text and visual contributions, written in an accessible way, to address audiences who are affected by the topics raised and are in a position to enact change.

Urban Pamphleteer #7: LGBTQ+ Night-time Spaces: Past, Present & Future features a variety of examples that together suggest how and why different night-time venues, events and clusters are produced; how, when and why they have opened or closed; the scenes that have recently emerged, or are imagined, and how these connect with historical ones, and with other places.

UCL Urban Laboratory's recent research evidenced that 58% of LGBTQ+ licensed venues in London closed in the past decade. Although it also highlighted how LGBTQ+ communities are queering non-LGBTQ+- specific venues, this should be seen against a wider trend of closures of pubs, nightclubs and grassroots music venues in London. Notwithstanding these challenges, some newer LGBTQ+ spaces and events are evident and these are providing spaces for communities traditionally less well served. Institutions such as cinemas, galleries and museums are also increasingly hosting LGBTQ+ nighttime events. Yet established forms of night-space, and the functions they serve, cannot simply be replaced by new or virtual ones.

Strong campaigns have mobilised to protect and re-open well established venues that while demonstrably viable and valued have recently closed. Activists have documented the impacts on specific communities when vital spaces have been shut in the interests of more profitable or larger-scale development. The Mayor of London and Night Czar have recognised this evidence and recently launched an LGBT+ Venues Charter, featured in the Urban Pamphleteer issue. Other contributors address how LGBTQ+ people experience the city at night; which nightlife spaces are valued and why; the tactics being used to claim or reclaim space by and for members of communities with less access to permanent, licensed venues; whether certain kinds of space are more difficult to queer than others; and what can be done to support LGBTQ+ night scenes and spaces now and into the future.

Urban Pamphleteer #7 was officially launched on Saturday 14 July at a public reception hosted at the Museum of London, featuring an open mic session with brief talks by people involved in creating and campaigning for a range of long-running, new and imagined LGBTQ+ community spaces.

This issue was edited by Ben Campkin, Laura Marshall, and Rebecca Ross, and designed by Guglielmo Rossi.

Urban Pamphleteer #7 has been produced in partnership with Museum of London for City Now City Future, a season of ideas, debate and inspiration.