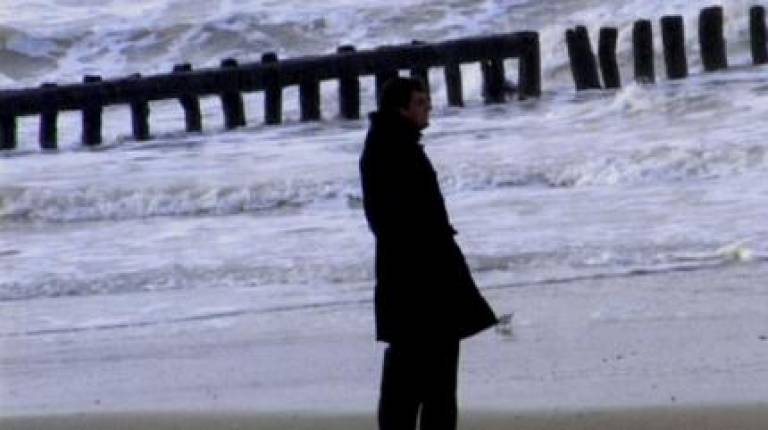 **For reasons beyond our control, the venue for the screening has changed and will now take place at The Waiting Room on Folkestone Harbour Arm from 7pm. It is a 12 minute walk from the original venue on Guildhall Street [directions]**

In collaboration with Open City Documentary Festival and The Bartlett's Film + Place + Architecture Doctoral Network, Urban Lab Films present a film screening proceeding the EDGE: Border symposium, as a way to discuss how filmmakers and visual artists are portraying the dual themes of edge and border through their works.

The event is free entry.

The screenings will be followed by a Q&A with the directors Simon Robinson and Pablo Sendra. Please note that Marc Issacs can unfortunately no longer join us as previously advertised.

For the English, the French port town of Calais is the gateway to Europe or a place to buy cheap alcohol. But for hundreds of migrants it is the final barrier in the desperate search for a new life in England. For the inhabitants of Calais life can be very hard, filmmaker Marc Isaacs carefully juxtaposes the lives of refugees, migrants and English expatriates prompting each to reflect on life in their home country and their dreams for a better future. Calais: The Last Border is an intimate film about life in a transient town.

At night the edgelands come alive. The drab grey exteriors of warehouses become bathed in light, sodium, fluorescent and LEDs, in a shifting hue of yellows, reds, ochre's, greens and blues. Arterial roads are given over to tankers and 'artics', ferrying goods and fuel from giant out of town distribution centres. Boy racers in souped up hatch backs tear apart the still air, bass carrying for miles, engines screaming for respite, wheels screeching for purchase on the damp asphalt. Nightclub patrons are ejected onto the street, bleary eyed and wrestling with gravity, Cigarettes are lit, drinks regurgitated, vivid colours splash. Sirens pierce the void. Like most spaces, edgelands and urban wildscapes can be divided into two distinct spheres of usage, night and day.

Ghosts and Empties is part of a continuing series of films titled 'Zones of Change', exploring themes surrounding the disjointed development of the Thames Gateway region. Using sound, and moving image to act as a portal to read and experience the landscape, the film explores the Gateway region at night.

The Westway, in west London, is Europe's largest elevated urban highway. The area below and around the Westway has witnessed intense community activism in the last four decades, with a diversity of groups campaigning and developing community initiatives, including the largest Community Land Trust in the UK. At the same time, the area is suffering from pressure from the real estate market and social housing tenants are under threat of displacement. The film reproduces a four-mile walk along the Westway, meeting and interviewing a representative from each of the three community initiatives: Grenfell Action Group*, St Quintin and Woodlands Neighbourhood Forum and Westway23. The film aims to explore different forms of community activism, their objectives, their strategies or actions and their results so far. It uses observational and interactive methods.

*The film was recorded in November 2016, before the Grenfell Tower fire happened.