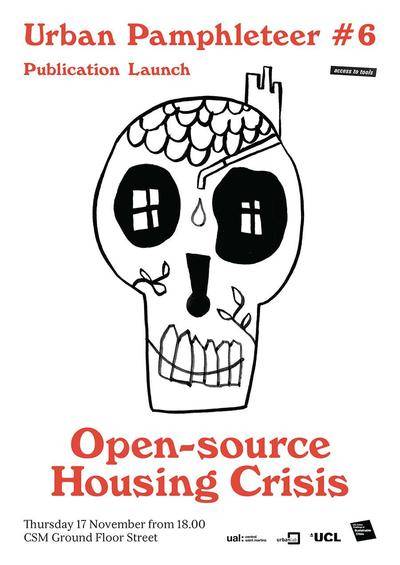 Join us for the launch of Urban Pamphleteer #6: Open Source Housing Crisis, edited by Rebecca Ross and Ben Campkin, at Central Saint Martins, University of the Arts London.

The issue responds to the urgent need to invent new ways of approaching London's rapidly escalating housing crisis and engages critically with its underlying logics. We will also launch the new Urban Pamphleteer website at the event.

London has entered a period of deep reconfiguration following Brexit, the scope and implications of which are yet unclear. Add to this the compounded effect of those already dis-enfranchised following years of austerity. With regards to housing in particular, predictions range from a property value crash, to a stall of all new building, to London real estate attracting even more foreign investment given the weak pound.

What is clear is that there are as yet unknown challenges ahead and perhaps also some new possibilities. However, in the context of a dizzying plethora of new communication channels and technologies, there are many questions that complicate this comparison that are explored throughout this issue: how can we ensure more accessible, wider scope, higher quality, and more impactful public conversations about housing amongst Londoners? Why are so many dis-advantageous conventions of the developer - real estate - government 'industrial complex' left unquestioned? If, whether we agree with it or not, the role of the consumer and the role of the citizen are convergent, how can Londoners come together to more effectively leverage this hybridity?

Urban Pamphleteer is a series of publications that confront key contemporary urban questions from diverse perspectives. Written in a direct and accessible tone, these pamphlets draw on the history of radical pamphleteering as a tool for instigating change. Urban Pamphleteer #6 is financially supported by Restless Futures at Central Saint Martins.