Evidence-based medicine has transformed the way in which statistical evidence is used in medicine. Hierarchies of evidence are now routinely used by medical researchers and health policy makers to assess evidence for the effectiveness of treatments and health policies: studies that simply observe patients after treatment are ranked lower than studies that randomly decide who to treat, and these in turn rank lower than studies that review the evidence obtained by a series of trials. Evidence hierarchies have become so widely endorsed that they are now being used across the social sciences and in public policy, as well as in medicine. 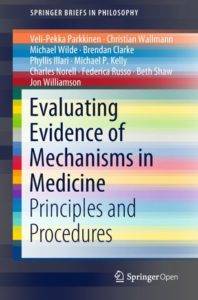 While there has been some debate about which sorts of trials should be placed at the top of the hierarchy, this project focuses on the bottom level, which is normally occupied by evidence that is not obtained from a statistical trial. In our view, while it is appropriate to relegate anecdotal evidence and hearsay to this lowest level, other, better quality evidence is also being ignored, simply because it is often not obtained from statistical trials.

The EBM+ (Evidence Based Medicine Plus) consortium has published a large number of articles, blogs and papers over recent years on this topic, and has now released its first Methods handbook - "Evaluating Evidence of Mechanisms in Medicine: Principles and Procedures". The book is available via Open Access on the Springer website, and contains work by Phyllis and Brendan, as well as Donald Gillies, Federica Russo, Jon Williamson and many more.