There are resources relating to Ukraine in many libraries and archives in London and throughout the United Kingdom. Those London libraries which have significant Ukrainian holdings are described below. There are Ukraine-related documents in a wide range of repositories. For example, archives of the Cable and Wireless company contain maps of cables laid along the Black Sea bed; the Labour Party Archive has papers relating to the Holodomor, and also Ukrainian social-democratic parties (1918-20); the Midland Bank Archive has correspondence about loans for the building of the Donetsk Railway (1909-10); in the Society of Friends Library there is the text of a talk, given in 1920, describing a visit to western Ukraine by the Quakers to assess the level of aid needed by the population in the wake of the War; the Royal Entomological Society has a paper (1787-8) on the butterflies and moths of Ukraine. There have been a number of attempts, for example, by Janet Hartley, to compile lists of archival holdings.

The British Library has an extensive collection of Ukrainian and Ukraine-related books, as well as Ukrainian items in the manuscript, periodical, map and philatelic collections and the sound archive. Highlights of the collection include Ivan Fedorov’s Ostroh Bible of 1581, Pamvo Berynda’s ‘Leksikon Slavenorosky’ (1653, a dictionary rendering Church Slavonic into the literary Ukrainian of the time), a first edition of Taras Shevchenko’s «Кобзар» (‘Kobzar’, 1840) and the first Ukrainian translation of George Orwell’s ‘Animal Farm’ (1947), with a preface written specially for the Ukrainian edition by Orwell himself (the photograph shows the same book from a private collection in London). 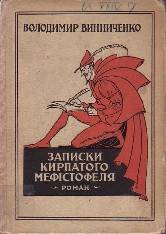 The SSEES Library houses Ukrainian books relating to the topics of academic study at the School, including history, political science, economics, language, culture and literature, as well as periodicals, archival material, audio-visual and digital resources. The Library also maintains a page of internet resources on Ukraine. The Library has an extensive collection of Ukrainian literature from the 19th century to the present day, acquired over many decades but, in particular, in the 1960s-1980s, when Dmytro Bartkiw was a senior member of the Library staff at SSEES, and Victor Swoboda was Lecturer and, subsequently, Reader. An example is this early edition of Volodymyr Vynnychenko’s ‘Notes of a snub-nosed Mephistopheles’ (c. 1919). The book must have been acquired by SSEES very early on, as it bears the library stamp of King’s College London (SSEES was a department of King’s from 1919 to 1932).

The National Archives at Kew

In the National Archives at Kew, among the records created and collected by the UK government and courts of law, are a substantial number pertaining to Ukraine. A preliminary search using the words ‘Ukraine’ and ‘Ukrainian’ brings up over 1,200 results. An early record is ‘An account of the origins and costumes of the Cossacks’, dated 1656. Files of interest to those researching Ukraine include Foreign Office archives and records created by the War Office and Home Office. In ‘The Foreign Office and the Famine’ (Carynnyk, Luciuk and Kordan), the authors use documents relating to the Holodomor, sent to the West in British diplomatic bags, to construct a contemporary picture of what was going on in Ukraine in 1932-33.

The Shevchenko Library and Archive

The Shevchenko Library and Archive, maintained by the Association of Ukrainians in Great Britain (AUGB), was founded in 1946 and is one of the largest collections of Ukrainian diaspora books, periodicals, manuscripts, photographs and other archival resources in Europe. An example is ‘Ornamentation of the Ukrainian Village House’ (written in 1941, published 1980), by the ethnographer Vadym Shcherbakivsky, the manuscript of which is held at the Shevchenko Library. The Library also houses rare books and works of art and an extensive collection of Ukrainian postage stamps.

Other libraries and archives

Other London libraries and archives which have significant Ukraine-related holdings include the Ukrainian Institute and the Polish Institute and Sikorski Museum (the latter mainly on Polish-Ukrainian relations).