The Arts, Music and Literature

Ukrainian art, music and literature have all had a strong presence on the London scene, and it would not be possible to mention all the artists, sculptors, performers, musicians and writers who have contributed. Highlighted below are just some of the people and events which have made London a cultural centre for Ukrainians.

The most recent generation of painters and sculptors, who settled in London after the declaration of Ukrainian Independence, includes Dmytro Dobrovolsky, Leonid Kozlov and Olha Pryymak.

A number of art galleries in central London, including the Saatchi Gallery, the Orangery in Holland Park and small privately-run galleries, have hosted exhibitions of Ukrainian art, with works by artists from Ukraine and by expatriates.

The Association of Ukrainians in Great Britain organises regular exhibitions (right) by artists from Ukraine, and Ukrainian artists from Europe and the UK. Until recently the Danusha Fine Arts company organised exhibitions and promoted the works of various artists.

Many musicians from Ukraine and of Ukrainian origin have studied in London and, performed, and continue to perform, on the capital’s stages. The Wagnerian tenor Modest Menzinsky (1875-1935) appeared at Covent Garden in the early years of the 20th century. In 1959 the baritone Mykhailo (Michael) Minsky sang here, causing the music critic of the ‘Daily Telegraph’ to praise the richness of his voice, his vocal and dramatic range and interpretation.

The Wigmore Hall has seen the London debuts of many classical musicians over the decades, including the pianists Ireneus Zuk, Roman Rudnytsky and recently, the multiple prize-winning Antonii Baryshevskyi. Violist and conductor Maxim Rysanov, baroque violinist Pavlo Beznosiuk, flautist Lisa Beznosiuk, pianist Serhiy Salov and others often perform in the major London concert venues. London has also hosted world premières of works by Ukrainian composers, including works by Valentyn Silvestrov from Kyiv, at the Royal Festival Hall and the Barbican, and London-based Alla Sirenko’s ‘Golden Penguin’ at Covent Garden. One of the events marking the 75th anniversary of the Holodomor was the UK première, at the Cadogan Hall, of «Реквієм за померлими з голоду» (Requiem to Those Starved to Death) by Yevhen Stankovych.

A number of talented young musicians from Ukraine, including the pianist Serhiy Salov, the violist Maxim Rysanov and the violinist Yevgeniy Kostrytskyy, studied at the Guildhall School of Music and Drama, under a scholarship scheme for students from Eastern Europe.

Pavlo Hunka, Vassily Savenko, Maria Guleghina and Liudmyla Monastyrska are some of the Ukrainian singers who have performed at the London opera houses or given recitals in major concert venues. Additionally, Hunka and Savenko have been active in promoting the music of Ukrainian classical composers (the Ukrainian Art Song Project and the music of Borys Liatoshynsky respectively).

The ballet stars Ivan Putrov, Sergei Polunin and Natalia Osipova (Royal Ballet), Galina Samsova (London Festival Ballet) and Oksana Panchenko (Ballet Boyz) are just a few of the classical dancers who have been based in London and have performed here.

The Ukrainian community in London has, over the decades, given rise to a number of musical and dance groups, composed of enthusiasts. There are currently choirs at the Ukrainian Catholic and Orthodox churches, the London branch of the Ukrainian Youth Association (SUM) runs a dance group, and there are several bands, including the London-based «Земляки» (‘Countrymen’), who play Ukrainian music with a contemporary twist at concerts and dances.

Choirs and dance ensembles from Ukraine and diaspora countries have visited London over the years, including the Virsky Ukrainian Dance Ensemble from Kyiv, the Dukla ensemble from Prague, the Ukrainian Bandurist Chorus from the US, the Boyan Choir from Kyiv and others.

A London-based musician who has, over many years, performed and promoted Ukrainian classical, traditional and light music, as well as the art of the «бандура» (Ukrainian folk instrument), is the tenor Volodymyr Luciw. He has also organised a number of concerts marking important events, such as the 1988 commemoration, at the Royal Albert Hall, of the Millennium of the Christianisation of Ukraine-Rus’, in which massed Ukrainian choirs from across the world took part.

The Ukrainians who settled in the UK came with few possessions. They brought with them, however, a memory of, and skill in, traditional crafts, including embroidery and the art of the «писанка» (Easter eggs). These crafts were revived and promoted among Ukrainians and the British public, at community events and at major exhibitions, such as the Ideal Home (photo from the early 1960s).

In recent years Londoners have had ample opportunities to attend plays in Ukrainian or relating to Ukraine. Several theatre groups from Ukraine have visited London, including the Lviv-based Zankovetska Theatre. Since May 2011 the Royal Court Theatre has been putting on plays, in English translation, by writers from Ukraine (such as Natalia Vorozhbit).

An amateur Ukrainian theatre group existed in London in the early post-war years, and since that time various groups have put on performances (short plays, extracts of plays, rehearsed readings). 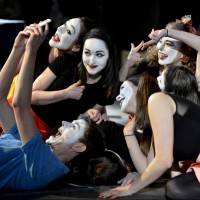 The mantle of drama in the community has now been assumed by the «Молодий театр» (‘Molodyi Teatr’ youth theatre). Founded in 2010, the group has produced numerous shows based on both well-known and neglected works of Ukrainian literature. Performances are normally in Ukrainian, although their well-received play ‘Bloody East Europeans’ (by Uilleam Blacker) was in ‘East European English’.

Since Independence in 1991 a new generation of writers from Ukraine has been based in London, including Svitlana Pyrkalo, Volodymyr Oleyko, Anna Shevchenko and Rio Kunder. A frequent visitor to the capital is Andrei Kurkov.