In the 20th century Britain experienced two main waves of migration from these areas: one after the Second World War and the other in the 1990s, after the turbulent collapse of Yugoslavia. The majority of migrants who arrived after the Second World War came to Britain mainly because of political reasons, as opponents of the newly established authorities in the post-war Yugoslavia. We can find some remarkable accounts of émigré experiences of life in London in the works of two acclaimed Serbian writers, Miloš Crnjanski and Borislav Pekić.

Miloš Crnjanski’s last work Novel about London (published in 1971) portrays the life of his fellow immigrants in London, describing the struggles they go through being split between accepting the new country and their new life circumstances and a longing for their home country which, having gone through political upheavals, is no longer what it used to be.

Borislav Pekic immigrated to Britain in the 1970s. He worked for the BBC World Service in London between 1986 and 1991 where he read his Letters from London on a weekly basis, with witty observations about Great Britain and the British people. He also ran a series for the BBC World Service on the history of Great Britain which was published as a book in 1992 under the name A Sentimental History of the British  Empire.

One of the contemporary writers from the region who have chosen London as a place of her residence is Croatian author Tena Štivičić. The National Theatre in London premiered her play ‘Three winters’ in December 2014 . The play casts light on the period between the birth of Yugoslavia after the Second World War and its collapse in the 1990s. The (hi)story is told through the personal stories of four generations of women in a Zagreb family and shows how the lives of individuals are affected by historical events beyond their control. The play has received a wide critical acclaim.

Events that promote literature from the countries of South-East Europe are organized in London frequently. The works of prominent contemporary writers from this region are represented through the activities of the publisher Istros books. The most recent event that celebrated the literary achievements of contemporary writers from the Balkans, whose works have been translated into English, was The Balkan Day: A Celebration of Creativity and Identity hosted by the British Library and organized in collaboration with Istros books. 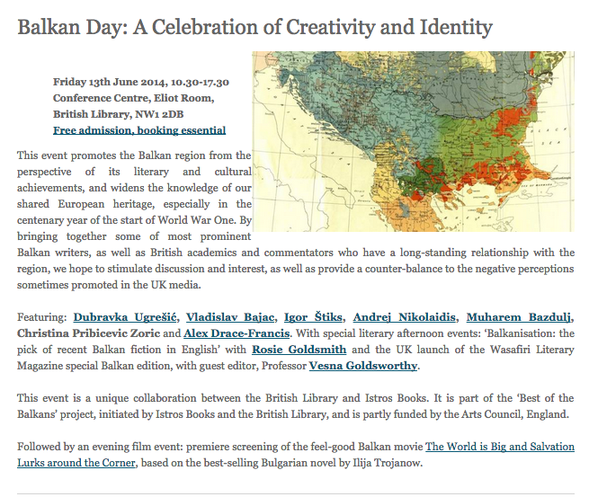