Summary and media appearances from UCL IRDR experts A magnitude 6. 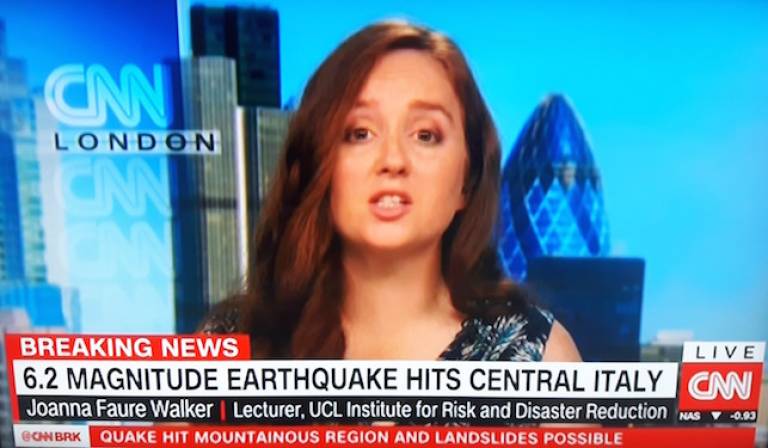 2 earthquake struck the Umbria and Lazio regions of central Italy at 3.36am local time (2.26am BST) yesterday (Wednesday 24th August). At the time of publishing, 159 people have been killed and the search and rescue operation is ongoing. The earthquake was felt as far away as Rome (160km away), Venice and Naples. The epicentral region is made up of many small villages, and is a popular holiday destination for Italians. Roads are small and the region is very mountainous, which appears to be hindering recovery efforts.

Interviews with IRDR staff have been broadcast on several TV channels throughout the day following the disaster. Joanna Faure Walker on CNN, BBC News Channel and BBC World service, and Carmine Galasso on 5 News Channel 5 and BBC World Service. They have also been quoted in TIME magazine, The Guardian, Phys.org, and IBT (see video and news links at end of this article).

Earthquakes and faulting in the Italian Apennines is an area of active research for Dr Faure Walker and her PhD students in the IRDR, Luke Wedmore and Zoe Mildon, and earthquake early warning systems are an active area of research for Dr Carmine Galasso and his IRDR PhD student Omar Velasquez Ortiz. Below, we summarise answers to the main questions that media outlets have posed to IRDR experts in response to this event.

Earthquakes are fairly common in this region with 20-30 large damaging earthquakes occurring over the last 700 years. The 2009 L'Aquila earthquake occurred ~45km south-east of Amatrice and in 1997 there was a prolonged sequence of earthquakes on the Umbria-Marche border ~40km north-west of Amatrice. The last earthquake in the Amatrice region occurred in 1950.

There is an ongoing sequence of aftershocks, active at the time of writing, which are smaller earthquakes than the initial magnitude 6.2 event. It is expected that these aftershocks will become less frequent and smaller over time. However there is also a possibility that another large earthquake may be triggered, as was the case in earthquake sequences in Italy in 1349, 1703 and more recently in 1997. These historical examples show that another large damaging earthquake is possible, but not inevitable.

Earthquakes are common but scientists cannot deterministically predict them (where, when, how strong?). However the Italian National Institute of Geophysics and Volcanology (INGV) and other civil agencies do produce probabilistic seismic hazard maps of Italy that show where events are more likely to occur and their expected intensity.

There are also earthquake warning systems, which give people tens of seconds to protect themselves upon rapid detection of the initial part of an earthquake. Most regions in Japan are now covered by a public earthquake early warning system, among the most advanced systems worldwide, operated by the Japan Meteorological Agency (JMA). A large-scale public earthquake early warning is currently operational in Mexico while smaller systems are used in Romania, Turkey and Taiwan with varying degrees of sophistication and coverage. Testing is underway in the US/California, China, Italy (Campania region) and Central Asia, where IRDR has ongoing collaborations.

Extensive damage has been reported in the towns in the region, with many collapsed buildings. Many buildings around Amatrice and the surrounding villages are still standing but are likely to have been damaged. Large aftershocks, though likely to be smaller than the original earthquake, may yet cause further collapse of buildings in the coming days and weeks. Following the L'Aquila earthquake in 2009, many towns in the area underwent retrofitting process to make buildings, in particular schools, more earthquake-resistant. Not all buildings can be retrofitted though because retrofitting often includes adding external structures that would look unsightly on many of the historical buildings.