Dr Marina Romanello, a research fellow at the UCL Institute for Global Health and research director of the Lancet Countdown on Health and Climate Change shares her key takeaways from COP26 and why climate change is the greatest global health emergency of the 21st century. 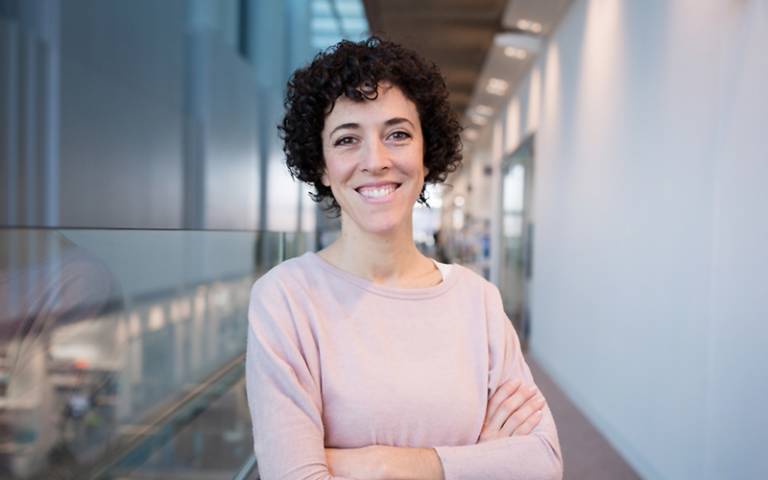 What is your role at UCL and what does it involve?

I am a research fellow at the Institute for Global Health and research director for the Lancet Countdown, a research collaboration bringing together over 120 researchers from around the world to track the health impacts of climate change and the health implications of the world’s response. In this role, I lead our research strategy, coordinate and guide the research activities of the collaboration, guide the refinement of our data and methods, and lead the annual indicator report, which gets published in The Lancet each year ahead of the COP climate negotiations. I work to ensure our research remains world-leading and policy-relevant, that the evidence we produce is available to decision-makers to help guide action that protects health in the face of a changing climate.

The Lancet Countdown on Health and Climate Change launched in 2016, can you tell us how the study came about?

The Lancet Countdown published its first report in 2016, but it was established following the 2015 Lancet Commission on Health and Climate Change. That commission concluded that responding to climate change could be the greatest global health opportunity of the 21st century. With the aim of promoting and guiding the transition to a healthy, low-carbon global system, the commission committed to tracking and communicating progress and successes of this transition, by regularly publishing updates of a range of indicators in global health and climate change. As a result, the Lancet Countdown was born and has already published six iterations of its annual reporting of these indicators. It serves as an international monitoring system that helps identify emerging risks, monitors the health impacts of climate change, tracks the health implications of the world's response and brings visibility to the health opportunities of a low-carbon transition.

Why is climate change regarded as the greatest public health challenge of the 21st century?

Climate change is already undermining the foundations of good health, both through direct human impacts, as well as by affecting the natural and social systems that support it. This is particularly so given our lack of responsiveness, preparedness and adaptation to the continually increasing climate change-related hazards. Rising temperatures are already affecting people around the world directly, with extreme heat waves threatening the lives of the elderly, very young children, those living with underlying chronic conditions, and the marginalised or under-resourced that have little access to coping mechanisms. It also affects mental health, with many studies showing that high temperatures are associated with increased suicidality, negative sentiment and increased violence. Extreme weather events, which are becoming increasingly intense as a result of climate change, affect people directly, causing direct injury, mental ill-health, and death, and also indirectly, through the disruption of services and loss of essential infrastructure.

The environmental conditions are also becoming increasingly suitable for the transmission of infectious diseases, with climate change putting people around the world at increased risk of water, food, air and vector-borne diseases like dengue, malaria, tick-borne encephalitis or vibriosis. In addition, climate change is also undermining livelihoods, with the rising temperatures and increased disease incidence are labour capacity, and extreme events leading to loss of assets. The changes in the environment are therefore threatening to reverse the past decades of gains in public health.

Right now, what is the most important public health problem tied to climate change?

This varies around the world, and in different communities. Europe and North America are being particularly impacted by extreme events, including record heatwaves, wildfire seasons and flood events, which these regions are still largely unprepared to cope with and control. In sub-Saharan Africa, the biggest concern is probably the increased incidence of drought events, which are impacting their food productivity and water availability. In South America, dengue fever is of enormous public health concern in the region, and the environmental conditions are favouring the spread of this disease.

Identifying the 'most important' public health threat is particularly challenging, because not only do the climate change-related hazards vary by location, but importantly so too do the vulnerabilities and adaptation measures that determine the extent to which these hazards threaten human health.

But perhaps the most concerning problem tied to climate change is the fact that all these hazards to health are occurring simultaneously, leading to 'multi-hit' scenarios in which different health crises converge, and exacerbate one another. A good example of this was the extreme heatwave this year in Canada, which converged with devastating wildfires. The health systems are increasingly having to cope with multiple public health emergencies at once, pushing them to the limits of their capacity. As the global average temperatures continue to rise, this is what we are beginning to see more frequently, with grave concern.

Who is most affected by climate change?

The vulnerable in every society, rich and poor, will be always the most affected by climate change. Concerningly, they will also be the ones with the least capacity to cope and recover from climate change-related impacts, which therefore act as an amplifier of their vulnerabilities. The elderly, those living with chronic health conditions, the marginalised, and those that cannot take care of themselves, will be most heavily impacted.

But the vulnerable group that concerns us the most is children. Harmful exposures during childhood and poor nutrition can irreversibly affect their physical and mental development, and children are at higher risk from serious disease – the risk of all of which is increasing as a result of climate change. In addition, children have less control over the environment that surrounds them and rely on adults for protection. Compounding all of this, children born today will inherit an increasingly warming world, facing the adverse health effects of climate change throughout every stage of their lifetimes. We simply don’t know yet what a lifetime of multiple and increasing climate-related health impacts will mean for the younger generations.

What is the legacy of COVID-19 in addressing climate change?

The COVID-19 pandemic has shocked all aspects of our lives, in a way the current generations hadn’t ever before experienced.

This pandemic has exposed the fragility of health systems around the world, and the extent to which, when our health is put at risk, every aspect of our lives, livelihoods, economies, and societies are threatened. But, importantly, it has also revealed the depth of the capacity of humans to adapt and respond to hazards when necessary and the magnitude of the changes possible.

However, while the rate of emissions was diminished in 2020 during the stricter lockdown phase in the global north, the recent report published by the United Nations Development Programme (UNDP) suggests emissions in 2021 would be again nearing historical records. Most concerningly perhaps, less than 20% of COVID recovery spending, for which trillions of dollars are being unrolled globally, support low-carbon measures. Current plans would deliver a carbon-intensive economic reactivation that would take the world permanently off track from meeting the Paris agreement goals. We are now looking at a world that will attempt to exit the phase of a COVID-19 health crisis, just to enter a phase of an even more challenging climate change-related health crisis, for which no vaccine can be developed.

It's important to note, however, that we also have today an opportunity to build a better future. As countries around the world strive to rebuild and reactivate their economies, redirecting COVID-related spending towards a green recovery, in alignment with the WHO’s recommendations, could see the world finally turning the tide, and delivering a future of improved health, reduced inequity, and economic and environmental sustainability. However, this requires political will, and world leaders to act together to make a just transition possible.

What were your key takeaways from COP26?

The COP26 outcome did not match the urgency of the situation, and the gap to 1.5C was only slightly reduced, with the most ambitious, best-case scenario, still committing the world to 1.8C of warming over pre-industrial temperatures. The last-minute changes watering down the language on coal was disappointing. However, perhaps even more so was the fact that no mentions were made to the use of gas and oil, which together make up to roughly 55% of global greenhouse gas emissions, and which are being still used by high-income countries that have the resources and capacity to transition to low-carbon energy sources.

Concerningly, this COP failed to provide resources for vulnerable countries to be able to respond and rebuild from the loss and damage that they are already facing as a result of climate change, and the commitment of making 100 billion USD available to promote adaptation and mitigation activities in lower-income countries by 2020 might not be met until 2023.

However, there were also some unprecedented wins. Coal, methane and fossil fuel subsidies were mentioned for the first time in a COP agreement, there was a call for emissions to be reduced by 45% by the end of the decade (which would be necessary to stay under 1.5⁰C of warming, but its implementation is still uncertain), and it was established that countries will increase ambition in their commitments towards decarbonisation every 5 years. Carbon markets have also been set up after many difficult discussions, with the biggest loopholes closed (although the remaining loopholes could still endanger nature, indigenous people, and the decarbonisation goals). Moreover, it was recognised that vulnerable countries are disproportionately suffering loss and damage from climate change.

Importantly, health, indigenous communities and youth were present as never before throughout the negotiations, and the health argument for climate action was replicated by numerous leaders during the negotiations. Over 50 national health systems committed to becoming more resilient and sustainable, with almost 20 health systems around the world committing to reaching net-zero healthcare by 2050. This is an enormous achievement, reflecting the gravity of the climate crisis for health, and how continued greenhouse gas emissions are incompatible with health professional’s promise to “first, do no harm”. As guardians of our health and wellbeing, the leadership of the health community was heard loud and clear and brings hope that action can be taken to protect us, and our children, from a future of increased health impacts.

However, perhaps the most noticeable outcome from this COP was the big disconnect between the request of the public and of the negotiation outcomes. There is an unprecedented level of engagement, particularly of health, youth and indigenous groups, on climate change. The scene is set for increased ambition next year, when COP27 takes place in Egypt. 1.5⁰C is only just barely alive. But there is still hope!