UCL President & Provost Dr Michael Spence has described the university’s new UCL East campus on Queen Elizabeth Olympic Park as ‘an extraordinary contribution to London, the UK and the world’, while visiting students and staff at its One Pool Street site. 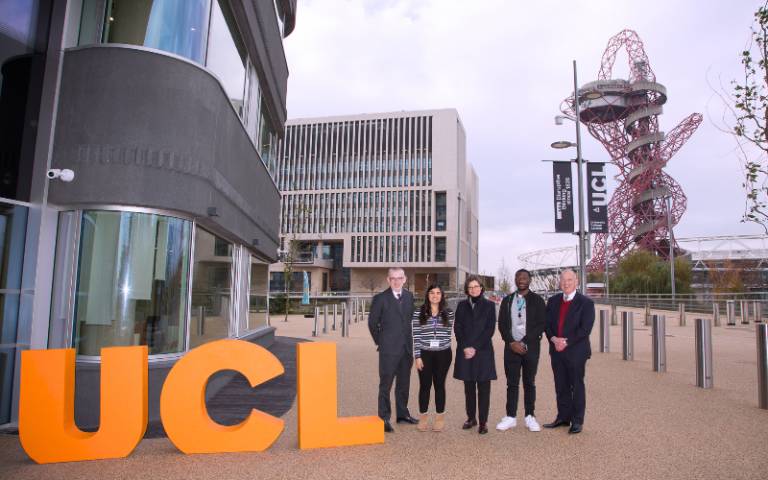 Speaking to hundreds of staff and students at the newly opened first building on the campus, Dr Spence praised the ‘passion for excellence and ability to create value and make a difference’ shown by all those involved, and cited the ‘local, national and international communities and future generations that our new UCL East campus will serve'. 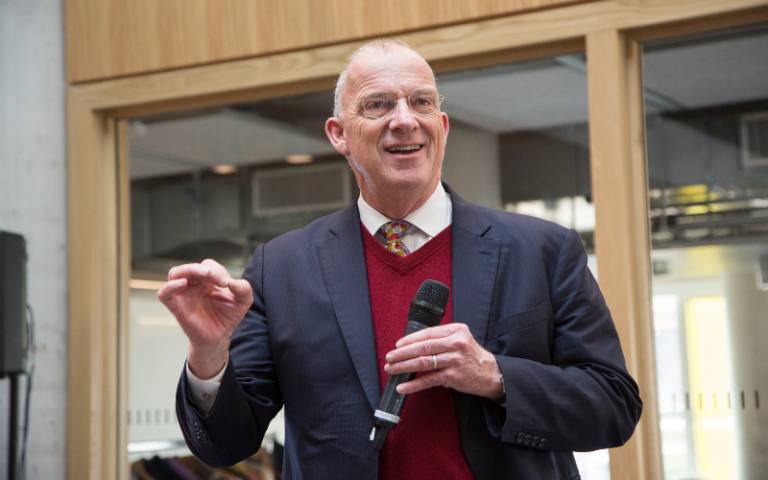 Dr Spence commended the ‘vision and remarkable commitment’ of Professor Paola Lettieri, Pro-Provost UCL East, who has led the creation of the campus over an eight-year period, turning the plans into reality, from consultation and planning through to design and build. 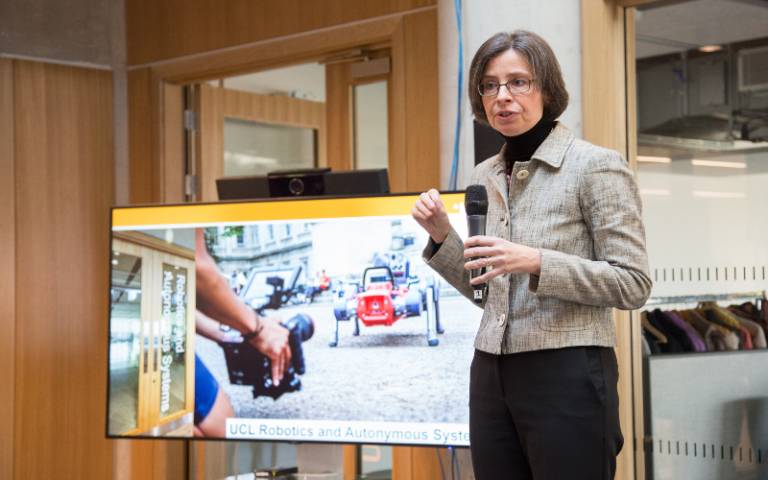 Professor Lettieri (UCL Chemical Engineering) thanked Dr Spence, the UCL community, and former President & Provost Professor Sir Michael Arthur, for ‘trusting me to champion UCL East’. She went on to thank the team of academics who collaborated on the vision for teaching, learning and research on the campus. Professor Lettieri also thanked colleagues from UCL Estates, UCL’s construction partners and architects and the many, ‘too many to count’, academics, students and professional services teams who worked together as 'One UCL' to open One Pool Street. 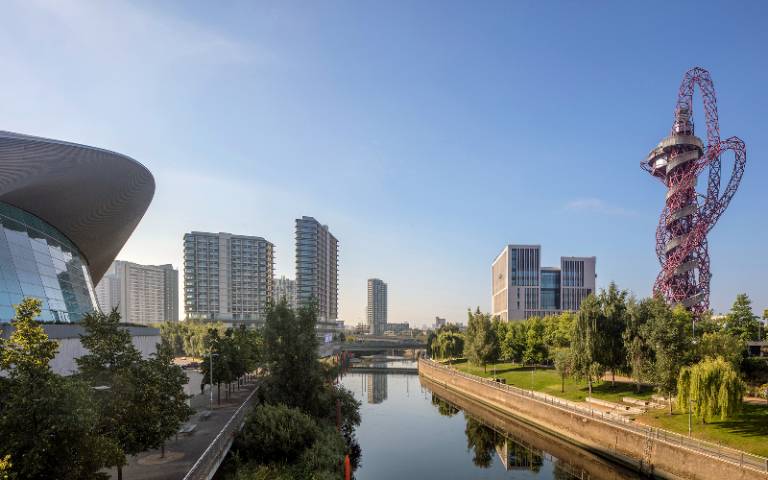 The moment marked a significant milestone in the progress of the first phase of the new campus, which will be the biggest development in UCL’s nearly 200-year history. UCL East will tackle the biggest challenges facing people and the planet, driving discoveries underpinned by UCL’s Grand Challenges, including sustainable cities, technology transformation, health and wellbeing, equality and justice, and cultural understanding.

One Pool Street, just along the river from the London Aquatics Centre, will be joined next year by a larger building opposite called Marshgate, standing beside the London Stadium and giant ArcelorMittal Orbit sculpture.

Leading the way as the campus fully opens up, One Pool Street is bringing the first of a series of cutting edge UCL research centres to the Park as well as students from across London and around the world to study brand new degree programmes in subjects like robotics, ecology and big data, global health, assistive technology, urbanism, heritage and the internet of things. 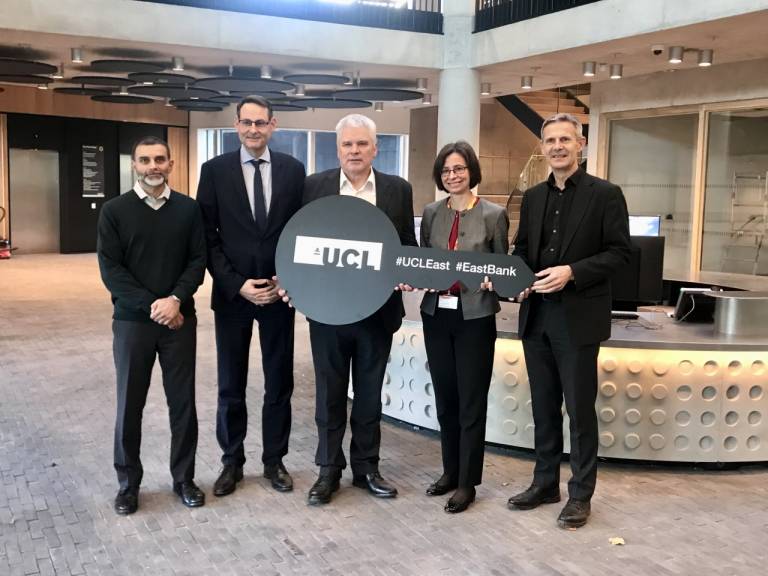 The building, which comprises three floors of research and teaching facilities topped by two towers of student accommodation, was designed by architects Lifschutz Davidson Sandilands and handed over to UCL by construction partner VINCI at the end of October. 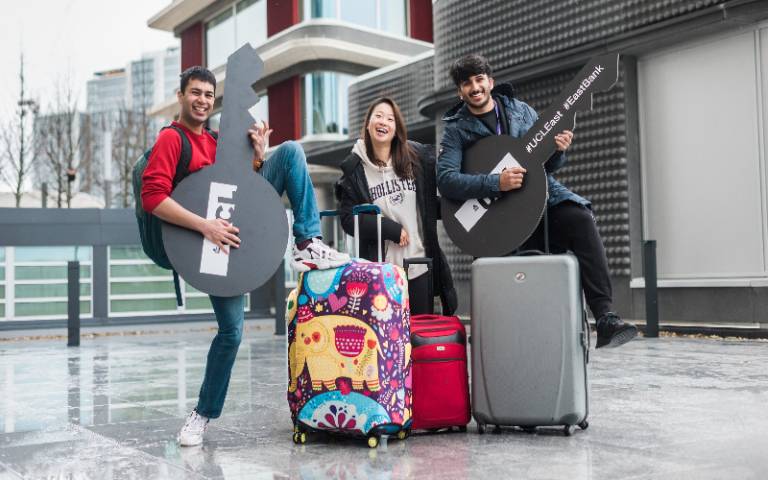 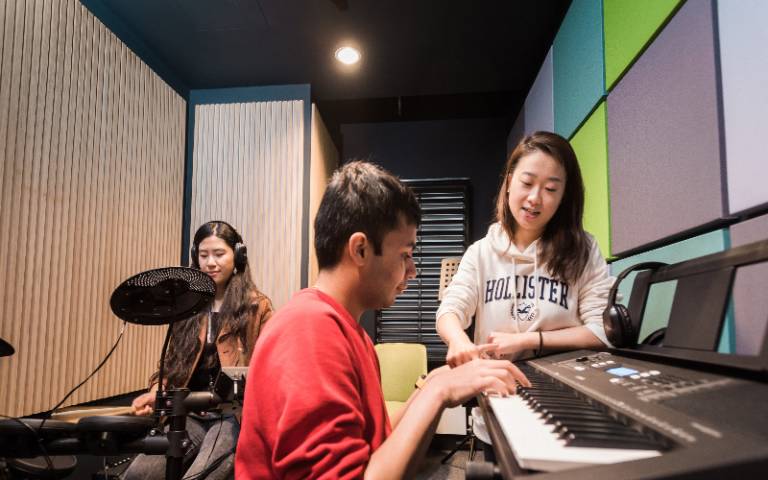 The One Pool Street accommodation was built in consultation with students and includes extra large living areas, a multi-purpose common room and a music room where anyone can enjoy practising or making music together. 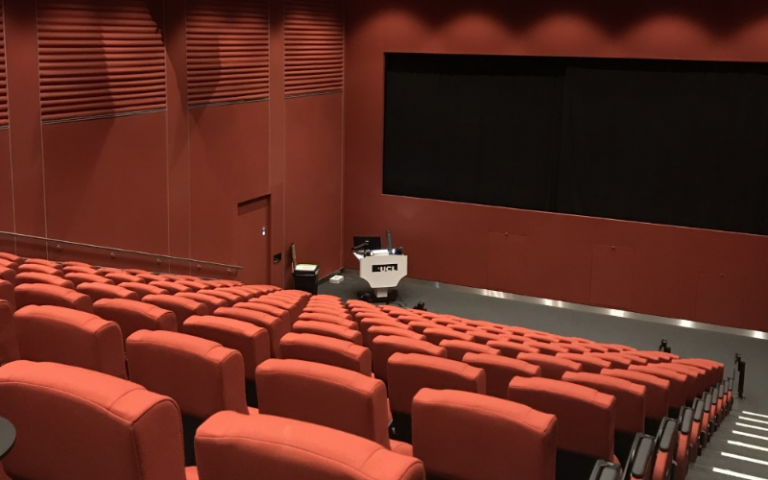 Uniquely too, the building is open to the public, with a cinema that is also a lecture theatre, a café, shop, works of art and activity spaces designed for the enjoyment of the community as well as students and staff. UCL researchers have been working locally over many years to embed the university’s work into the community. 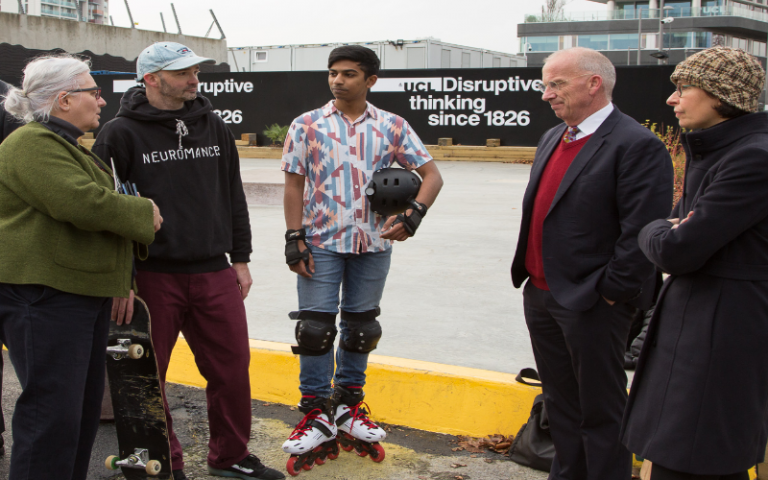 One project, looking at how the campus can incorporate new public facilities, has resulted in the City Mill Pool Street skate park on land not yet developed on the UCL East campus next to One Pool Street.

Nine UCL faculties have joined together to create UCL schools and centres at One Pool Street in 2022/23, which include:

Other spaces and facilities at One Pool Street UCL is the first of five world leading organisations to open a new base on Queen Elizabeth Olympic Park as part of the East Bank development, London’s new culture, innovation and learning quarter, backed by the Mayor of London, that will bring an estimated 2,500 jobs, 10,000 students and £1.5 billion in economic benefits to the area as part of the legacy of London 2012.

UCL and UAL’s London College of Fashion are also founding members of the SHIFT inclusive innovation district, partnering with businesses and organisations on and around Queen Elizabeth Olympic Park to open up use of the Park as a living testbed for discoveries and inventions that address the daily challenges of living in urban areas.

“UCL has a reputation for doing things differently. We are a university that creates value and makes a difference, a place where research transforms lives. It’s been really exciting to see our UCL East campus beginning to go live, with so much fantastic activity already at One Pool Street. I would like to thank Prof Paola Lettieri for her unparalleled vision and commitment to making this next chapter in UCL’s disruptive thinking a success. I can’t wait for the opening of our Marshgate building next autumn. I know that this campus will deliver locally and globally, for communities in London, the UK and internationally, and for future generations to come.”

“I would like to thank everyone at UCL, as well all our students and all our partners who have been part of this fantastic journey. I am so proud of what we have achieved together and the way we have broken down boundaries and collaborated in new ways to turn this vision into a reality. UCL East encapsulates UCL’s philosophy of disruptive thinking and will give us even greater opportunities to do what we all want to do, which is to be that university which makes an impact both locally and globally on everybody’s lives. I am grateful to UCL for trusting me to champion our new campus and look forward to welcoming colleagues, partners and the community to continue this journey as we look to the opening of Marshgate in 2023.”

"I'd like to congratulate the project team for its resilience in the face of unprecedented challenges during the construction period. Successfully delivering One Pool Street for UCL during such a turbulent period for the industry is testament to the team’s professionalism, tenacity and mutual support and respect, all of which were required in equal measure. One Pool Street is a fine building of which the whole team should be very proud."

“I am so proud that East Bank is the biggest single investment London has made in culture and education for over a century. Creativity, innovation and education are at the heart of our vision and so the opening of the first building on UCL’s new campus is a significant moment. It is a fantastic to see our world-class institutions bringing together communities and creating jobs and opportunities for young and emerging creative talent as we continue building a better London for everyone.”