Psychosis rates for all local areas in England have been estimated using a new modelling tool developed by UCL researchers. 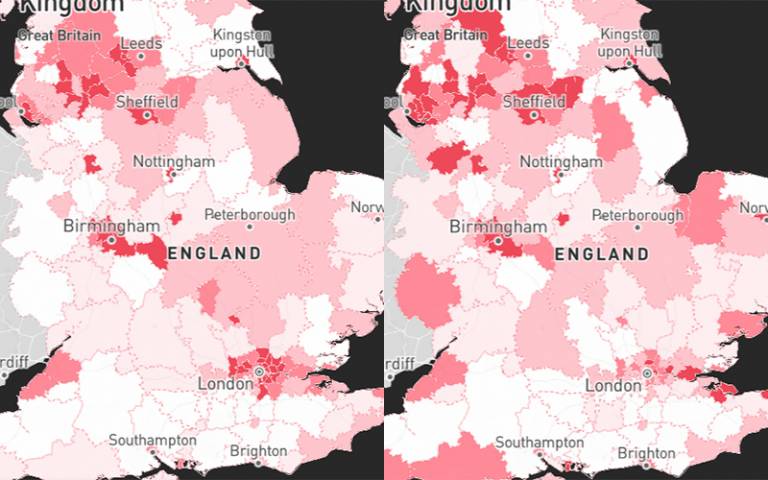 The method is cited in government guidance on how policy makers can allocate mental health resources for people experiencing their first episode of psychosis.

The PsyMaptic tool estimates the expected number of people who will newly develop psychosis for each locality, providing both a current and forward-looking estimate up to 2025. The lead developers, based at UCL Psychiatry and UCL Statistical Science, have published their findings in The British Journal of Psychiatry.

Researchers pulled together data on risk factors including deprivation, ethnicity, age, gender, cannabis use and social fragmentation, to predict how many people will develop psychotic disorders such as schizophrenia. They validated their method by comparing results to actual incidence data from 2017.

The new population-level prediction tool builds on an earlier version released in 2013, which features in guidelines from The National Institute for Health and Care Excellence (NICE), and has now been updated with more local detail down to the electoral ward level, the inclusion of cannabis use, and also to be a forward-looking prediction tool. In December 2020, NICE updated their guidance to encourage health commissioners to use the new tool.

The researchers found that people in some areas are nearly three times as likely to experience psychosis, compared to the England average. Deprived urban areas with large Black, Asian and minority ethnic (BAME) populations, such as Bradford, Manchester, and parts of London and the West Midlands, are estimated to have more than 50 people per 100,000 experiencing a first episode of psychosis per year, more than double the England average of 25.

Across the whole of England, the tool estimates that 10,425 people would have been treated by early intervention in psychosis care for first-episode psychosis in 2019, which would rise to 11,067 by 2025.

The tool is available online, and can be explored to find further details such as expected demographic makeup of people with psychosis in an area, which can help policy makers plan for culturally-sensitive services or youth services, for example.

The researchers say that this prediction data will allow the NHS to more effectively plan services based on specific, accurate models of the incidence of psychotic disorders predicted to occur in the general population, rather than relying on numbers of people accessing treatment. The data from the new tool also allows NHS policymakers, commissioners and service providers to better understand the number and sociodemographic breakdown of new people referred and requiring assessment and treatment for potential psychosis each year.

Lead author Dr James Kirkbride (UCL Psychiatry) said: “Our model is backed by extensive evidence that people in some communities are more at risk of developing psychosis, such as in urban areas, ethnic minority groups, and more socially fragmented or deprived areas. While we still need to do more research to know exactly what’s causing these patterns, it’s clear that we need to resource early intervention in psychosis services according to accurate models of local need, so that everyone can get timely access to the mental health care they require.”

Dr Kirkbride has conducted numerous studies into the risk factors for psychosis, such as finding higher rates among ethnic minority migrants who live in areas without other people of similar backgrounds,* and findings suggesting that social inequalities and language differences could partly explain the higher psychosis risk in minority groups.**

Co-senior author Professor Gianluca Baio (UCL Statistical Science) said: “Our probabilistic prediction model may also be useful for other health conditions, where there is strong evidence for the risk factors that predict regional variation in case rates.”

Co-author Professor Peter Jones (University of Cambridge), who co-developed the PsyMaptic models said: “The PsyMaptic prediction tool at last provides the NHS with fine-grained information to improve planning, commissioning and early intervention service delivery for people experiencing psychotic illness for the first time. It is a powerful example of the real-world impact of diligent mental health research.”

Professor Paul French (Manchester Metropolitan University), another co-author of the paper added: “This groundbreaking prediction model will provide clinicians, commissioners and policy makers with the crucial information required to plan the shape of services for people with emerging psychosis and is likely to be replicated in the future for other mental health conditions.”

The study was funded by Wellcome and the National Institute for Health Research UCLH Biomedical Research Centre, and involved researchers from UCL, the University of Cambridge, Manchester Metropolitan University, Hull-York Medical School, and Sichuan University.