Researchers at UCL and Newcastle University have developed a new class of self-forming membrane to separate carbon dioxide from a mixture of gases. 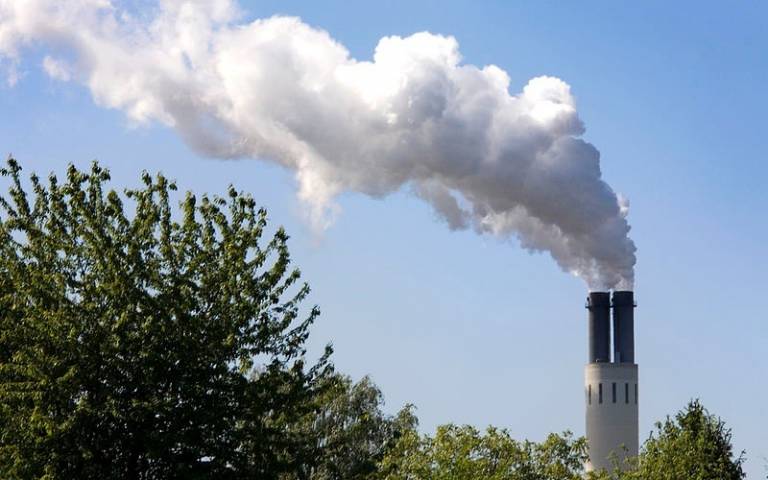 Operating like a coffee filter, it lets harmless gases, such as nitrogen, exit into the atmosphere and allows the carbon dioxide to be processed separately.

The team believe that the system may be applicable for use in carbon dioxide separation processes, either to protect the environment or in reaction engineering.

Co-author Professor Paul Shearing (UCL Chemical Engineering) said: “Over the past ten years, we have established sophisticated tools for X-ray imaging in the Electrochemical Innovation Lab, which enable us to see inside materials and devices during operation: here we have applied these techniques to novel self-forming membranes, which will play a key role in decarbonisation.”

The work is published in the journal Energy and Environmental Science and was supported by funding from the Engineering & Physical Sciences Research Council (EPSRC).

Co-author Dr Greg Mutch, of Newcastle University, said: “We didn’t build the entire membrane from silver, instead we added a small amount of silver and grew it within the membrane adding the functionality we desired.

“Most importantly, the performance of the membrane is at the level required to be competitive with existing carbon capture processes – in fact, it would likely reduce the size of the equipment required significantly and potentially lower operating costs.”

Carbon dioxide emissions are the main driver of climate change. Currently, our climate is approximately 1 °C warmer than pre-industrial times. We have already emitted enough carbon dioxide to warm the planet beyond 1.5 °C (there is a lag between emissions and warming), and we have international agreements in place to ensure that we do not pass 2 °C.

Warming beyond 2 °C will have disastrous consequences, including impacts on human health, food availability, large-scale migration and our environment. We urgently need new materials and processes that reduce the amount of carbon dioxide we emit to the atmosphere – these technologies are referred to as carbon capture and storage (CCS).

Although we are making big efforts with renewable energy and electric vehicles, the world is still predominantly powered by fossil fuels and we are very unlikely to be able to reduce that contribution in time to limit warming to less than 2 °C.

In addition, large modelling exercises, such as by the Intergovernmental Panel on Climate Change, have repeatedly shown that the most cost-effective way to slow global warming always involves a significant amount of CCS (in the mix with e.g. renewable energy technologies).

The self-forming membrane
In a method never tried before, aluminium oxide supports in pellet and tubular form were used to grow the silver-based membrane. Silver was added to the support, and the conditions experienced during operation forced the silver to grow within the support, bestowing the membrane with a higher performance.

Using X-ray micro-computed tomography at the UCL Electrochemical Innovation Lab, the team were able to look inside the membrane and confirm that the permeation of CO2 and O2 stimulated self-assembly of silver dendrites.

Importantly, the performance of the membrane was shown through permeation measurements to be at the level required to be competitive with existing carbon capture processes. The permeability of the membrane was one order of magnitude higher than that required, and the flux of CO2 was the highest reported for this class of membrane.

Dr Mutch added: “These savings are important – the cost of carbon capture is one of the key factors limiting uptake of the technology. There is a common metric for membrane performance – the ‘upper bound’. As our membrane relies on a unique transport mechanism, we avoid the limitations of most membrane materials and go far beyond the upper bound.

“We hope that this study inspires new ways to form membranes, that lower costs, as well as drive interest in this new class of membrane for future application to protect our environment.”