Giant ridges on the surface of landslides on Mars could have formed without ice, challenging their use by some as unequivocal evidence of past ice on the red planet, finds a new UCL-led study using state-of-the-art satellite data. 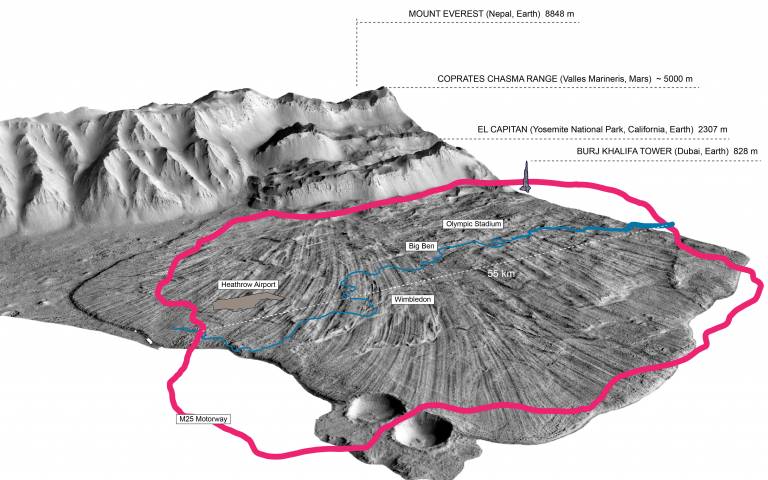 Detailed three-dimensional images of an extensive landslide on Mars, which spans an area more than 55 kilometres wide, have been analysed to understand how the unusually large and long ridges and furrows formed about 400 million years ago.

The findings, published today in Nature Communications, show for the first time that the unique structures on Martian landslides from mountains several kilometres high could have formed at high speeds of up to 360 kilometres per hour due to underlying layers of unstable, fragmented rocks.

This challenges the idea that underlying layers of slippery ice can only explain such long vast ridges, which are found on landslides throughout the Solar System.

First author, PhD student Giulia Magnarini (UCL Earth Sciences), said: “Landslides on Earth, particularly those on top of glaciers, have been studied by scientists as a proxy for those on Mars because they show similarly shaped ridges and furrows, inferring that Martian landslides also depended on an icy substrate.

“However, we’ve shown that ice is not a prerequisite for such geological structures on Mars, which can form on rough, rocky surfaces. This helps us better understand the shaping of Martian landscapes and has implications for how landslides form on other planetary bodies including Earth and the Moon.”

Cross-sections of the Martian surface in the Coprates Chasma in the Valles Marineris were analysed to investigate the relationship between the height of the ridges and width of the furrows compared to the thickness of the landslide deposit.

The structures were found to display the same ratios as those commonly seen in fluid dynamics experiments using sand, suggesting an unstable and dry rocky base layer is as feasible as an icy one in creating the vast formations.

Where landslide deposits are thickest, ridges form 60 metres high and furrows are as wide as eight Olympic-sized swimming pools end-to-end. The structures change as deposits thin out towards the edges of the landslide. Here, ridges are shallow at 10 metres high and sit closer together.

Co-author, Dr Tom Mitchell, Associate Professor of Earthquake Geology and Rock Physics (UCL Earth Sciences), said: “The Martian landslide we studied covers an area larger than Greater London and the structures within it are huge. Earth might harbour comparable structures but they are harder to see and our landforms erode much faster than those on Mars due to rain.

“While we aren’t ruling out the presence of ice, we know is that ice wasn’t needed to form the long run-outs we analysed on Mars. The vibrations of rock particles initiate a convection process that caused upper denser and heavier layers of rock to fall and lighter rocks to rise, similar to what happens in your home where warmed less dense air rises above the radiator.  This mechanism drove the flow of deposits up to 40 km away from the mountain source and at phenomenally high speeds.”

The research team includes Apollo 17 astronaut, Professor Harrison Schmitt (University of Wisconsin Madison), who walked on the Moon in December 1972 and completed geologic fieldwork while on the lunar surface.

Professor Schmitt, said: “This work on Martian landslides relates to further understanding of lunar landslides such as the Light Mantle Avalanche I studied in the valley of Taurus-Littrow during Apollo 17 exploration and have continued to examine using images and data collected more recently from lunar orbit. Flow initiation and mechanisms on the Moon may be very different from Mars; however, comparisons often help geologists to understand comparable features.

“Of additional interest relative to the Light Mantle Avalanche deposit will be the forthcoming examination of a core from the upper 70 cm of the deposit obtained during Apollo 17 exploration. This previously protected core is in the process of being opened and examined by a large consortium of NASA and outside scientists. This important study of a Martian landslide, for the time being at least, has been confined to remotely sensed information.”

The research was funded by the Science and Technology Facilities Council (UK).