The referendum process in the UK requires wholesale reform according to a report by the Independent Commission on Referendums, established by the UCL Constitution Unit. 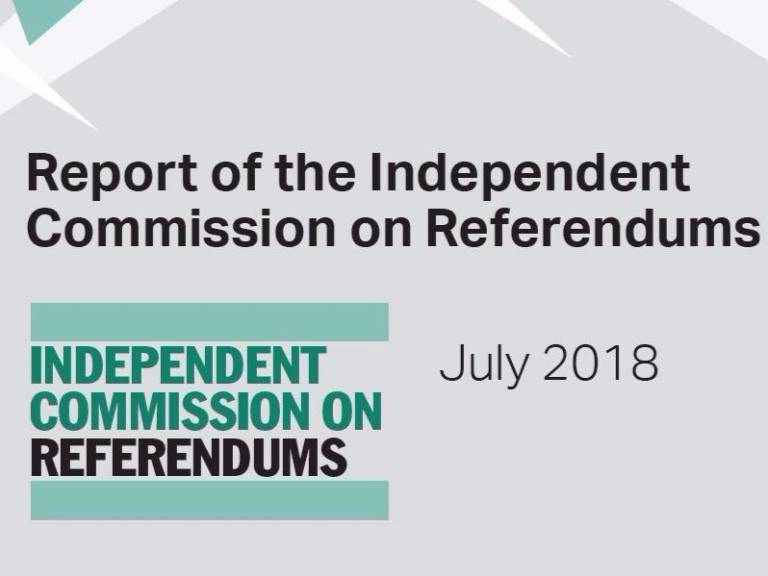 It finds that the rules governing the conduct of referendums are outdated, not least because of the rise of the internet and social media, and that greater thought about the processes surrounding a referendum is required.

Since 2000, five referendums have been held on matters of major importance, in the UK as a whole, Scotland, Wales, and the North East of England. In light of this experience, the Commission was set up by the UCL Constitution Unit to review the role of referendums in British democracy and consider how the rules and practice could be improved. The 200-page report is the most comprehensive review of referendums in over 20 years.

The Commission comprises 12 distinguished members from across the political spectrum. They include former cabinet ministers, parliamentarians, senior media figures, and electoral and polling experts. Commissioners represent a range of political opinions, with expertise extending across all major UK referendums of recent years.

The Commission gathered evidence from a range of individuals and groups, and held public seminars in Belfast, Cardiff, Edinburgh and London to inform the report. UCL researchers reviewed the functioning of referendums historically in the UK, and in contemporary democracies around the world.

Its key recommendations seek to ensure that referendums are embedded within our representative democracy, and do not risk undermining it.  The Commission also recommends that the UK's governments, parliaments and independent bodies work together to explore new and innovative mechanisms for public engagement in policy decisions, such as citizens' assemblies.

The Commission concludes that referendums are best suited to resolving major constitutional issues, such as those relating to sovereignty, and work best when held at the end of the democratic process to choose between developed alternatives. Until there is an effective way to ensure the democratic quality of referendums, it concludes that they should be used with caution.

"It is clear that referendums have become a key part of the democratic process - but a lot has changed over the past 20 years. The rules governing the role and conduct of referendums are outdated, not least because of the rise of the internet and social media.

Our recommendations stem from three core points: first, that referendums are best seen as co-existing alongside, rather than replacing, representative institutions; second, that they should be conducted in a way that is fair between the competing sides and effective in giving voters the information they want; and third, that the rules should keep up with rapid changes in online campaigning."

"We need to extend the opportunities people have to participate in democratic decision-making, but referendums on their own are not always the best way to achieve that.

Democracy requires listening, discussing, arguing, and compromising, as well as voting. If we want policy-making really to respond to the public's needs and wishes, we should help people participate in every stage of the discussion. Innovative democratic processes such as citizens' assemblies could be used ahead of future referendums to consider the issues and work out what the options should be - as was done successfully before Ireland's recent referendum on abortion. This could also pave the way for referendum campaigns based on evidence and reasoned argument."

"The nature of the UK's unwritten constitution means that the formal role of referendums has never been agreed, and usage has developed pragmatically and somewhat haphazardly. This risks opening up tensions, including between voters and their elected representatives.

The Independent Commission on Referendums has taken a really careful look at how referendums should fit within the UK's system of representative democracy and how their use can best be regulated. Adoption of its wide-ranging recommendations would help reduce such tensions, addressing concerns that have been expressed by politicians and voters alike."

• Referendums should be seen as part of wider processes of discussion and decision-making on key policy questions, not as 'quick-fix' solutions to political problems.

• Governments and political parties should avoid committing to holding referendums without first undertaking significant preparatory work: to develop options, work out whether a referendum is the best way to choose between these options, and establish how a vote for change would be implemented.

• If there are more than two clearly defined options, the possibility of holding a multi-option referendum should be borne in mind.

• Wherever possible a referendum should be held after legislation setting out the proposed change that has passed through the relevant parliament or assembly. Where this is not possible, detailed plans for change should be published and debated before the referendum. A process should be set out in advance requiring a further referendum, if such plans are not published or are in the end not fulfilled.

• The franchise for future referendums should be specified in standing legislation, not left to be decided each time a referendum is held.

• Special thresholds are very rare for other forms of political decision-making in the UK, therefore to require them for referendums only would be inconsistent.

Greater transparency and accountability of campaigners

• Lead campaigners should be designated as early as possible and a 'fit and proper' person test should be applied to board members of groups applying to be lead campaigners.

• It should be clarified in law that 'referendum expenses' includes spending on goods and services purchased prior to the regulated period but used during the regulated campaign period. The period for large campaign groups to submit expenses should also be shorted to three months.

• The Electoral Commission and Information Commissioner's Office should consider how they can work together to ensure the best possible regulation of online campaigning and campaign finance.

• Restrictions on government involvement in campaigning should be extended to cover the whole campaign period, but restricted specifically to campaigning for one or other side.

• Voters should be able to access the information they want easily so they can be confident in their decision.

• Publicly funded materials from campaigners should be clearly labelled as such.

• Mechanisms for promoting high quality discussion during referendum campaigns should be 'bottom' up rather than 'top down'. Governments and parliaments should explore mechanisms for engaging citizens during the campaign period, such as citizens' assemblies. These could be used to help give people information from sources they trust.

• An inquiry into the regulation of political advertising across all media should consider what form regulation should take and whether current divergences of approach between media remain justified.

• A searchable database of online political advertising should be developed, including information on when each advertisement was posted, to whom it was targeted and how much was spent on it.