The UCL Constitution Unit today launches an Independent Commission on Referendums, bringing together a group of very senior figures to deliberate on the use and conduct of referendums in the UK. 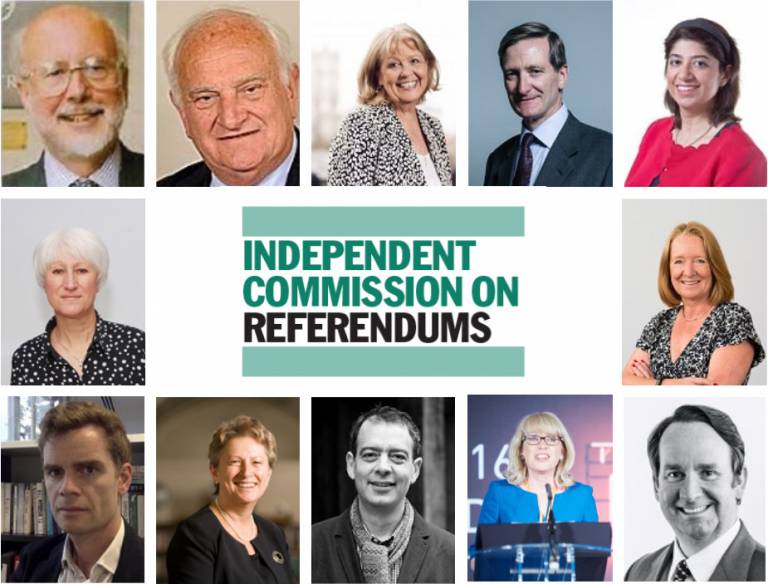 The Commission will meet over 8 months, take evidence, and produce a report and detailed recommendations in summer 2018.

The 12 distinguished Commission members include two former cabinet-level ministers, four other current and former parliamentarians, the former Chair of the Electoral Commission and a former head of political programming at the BBC. Others are leaders in the fields of political theory, media standards and public opinion. They represent a range of political opinions, with expertise extending across all major UK referendums of recent years.

Although referendums have become an increasingly common feature of UK democracy it is a long time since the framework governing them was last comprehensively reviewed. Since legislation was first introduced in 2000, successive referendums have raised important issues that remain unaddressed.

After last year's EU referendum, concerns were raised about the quality of debate, the potential for misinformation, the use of public funds for campaigning purposes, and the divisive nature of the campaign. The implementation of the result also exposed the tensions between the use of direct democracy and the UK's constitutional cornerstone: parliamentary sovereignty.

Nonetheless, it looks like there will be no going back on the use of referendums. Requirements for referendums before abolishing the Scottish Parliament or Welsh Assembly have recently been codified in UK law. The question we must now ask is how can we do them better? This is what the Commission will explore.

It will look at five main areas:

The Commission's report is expected to shape future debate around referendums in the UK. The Constitution Unit's 1996 Commission on the Conduct of Referendums helped pave the way for the first statutory regulation of referendums in 2000. The Commission will be supported by both the Unit's Deputy Director, Dr Alan Renwick, and Director Professor Meg Russell.

Dr Alan Renwick, Deputy Director of the UCL Constitution Unit, said: "Referendums are now part of our democratic system. But few people think we conduct them well.  Reviewing their role and conduct is vital, and the Independent Commission on Referendums provides the ideal mechanism for doing that.

"There is a tendency in the UK to think that referendums just are what they are and can't be improved. But we have much to learn from practice around the world, where a whole range of structures - regarding when referendums can be held, how campaigns are run, and what happens after the vote - have been tried.

"The Commission will combine Constitution Unit expertise on these matters with the extraordinary wealth of experience of the Commission members to guide recommendations on possible changes in the UK."

Sir Joseph Pilling, chair of the Independent Commission on Referendums said: "That we need to review the role of referendums in UK democracy is clear. What the best solutions are is less obvious. The Commission's members have deep experience of referendums in every part of the UK: as campaigners, negotiators, regulators, reporters, analysts, and informed observers. With the support of the Constitution Unit's researchers, they are well placed to develop workable recommendations on what should be done."

Sue Inglish - Head of Political Programmes, Analysis, and Research at the BBC (2005-15).

Dr Martin Moore - Director of Centre for the Study of Media, Communication and Power at King's College London and former founding Director of the Media Standards Trust (2006-15)

Professor David Runciman - Professor of Politics at the University of Cambridge who has written widely on democracy and representation.

Since the first referendum in 1973 there have been three UK wide referendums - two of them since 2011 - as well as six referendums in the nations of the UK and one regional referendum in England. Referendums have mandated major constitutional changes from devolution to Scotland and Wales to the UK's exit from the European Union, and given legitimacy to the peace process in Northern Ireland.