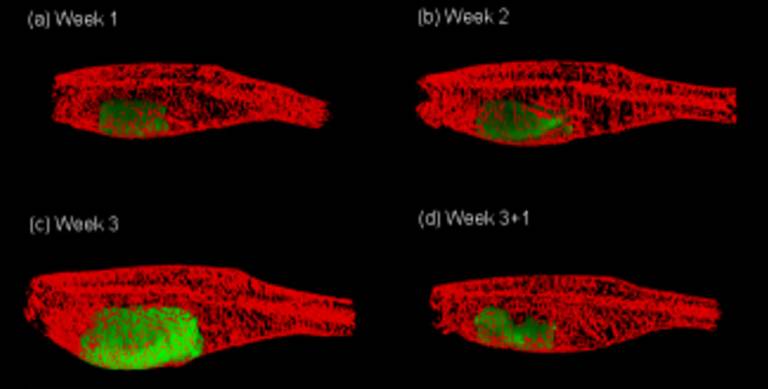 Animal testing is an essential step in developing new drugs for diseases; however, the process usually involves invasive procedures with animals that must be euthanized. The new method, adapted from an imaging method called optical projection tomography (OPT), repeatedly images the same organisms, reducing the number of animals used in testing.

The MRC-funded scientists can now image and measure the growth of cancerous tumours and the associated development of growth-enabling blood vessels in live zebrafish which develop cancer in a way similar to humans. UCL is a world leader in zebrafish research with the largest and most comprehensive fish facility in the UK.

Dr Paul Frankel, UCL Division of Medicine, who led the cancer biology aspects of the project, said: "Zebrafish serve as animal models of liver and other cancers, developing a form of the disease genetically similar to human tumours. This, as well as their small size, quick reproduction and transparency - which is necessary for OPT imaging - makes zebrafish an ideal organism to study using this technique."

Being able to track the stages of disease progression in a living organism means the team could also use the technique to monitor the effects of new anti-cancer drugs that aim to reduce tumour size.

Co-first author, Nicola Lockwood, also UCL Division of Medicine, said: "With the zebrafish model, we were able to directly visualise live progression of tumours within the context of a fully formed blood supply and immune system. This will be extremely important as we proceed to development of novel anti-cancer drugs."

Essential to tumour development is angiogenesis, the process by which tumours generate their own blood vessels to deliver the nutrients that enable growth. This process also facilitates the spread of tumours to other parts of the body, usually resulting in poor patient prognosis and death.

In a preliminary study, the OPT system was used to image zebrafish over time during tumour progression, allowing the researchers to measure tumour size and the amount of blood vessels within the tumour.

As the offspring of these fish have both genes, when imaged, their blood vessels fluoresce red and the liver tumour fluoresces green.

"This technique has the advantage of being simple and robust," said Professor Paul French, from the Department of Physics at Imperial, who led the development of OPT. "Unlike the other 3-D optical imaging techniques, it doesn't rely on focused light, so it is relatively gentle on the organism being imaged. This makes it particularly good for imaging live animals across long timescales."

The ability to perform studies over time allows researchers to assess disease progression in the same organism over spans of weeks to months. It is also able to yield high-resolution 3-D images at a fraction of the time and cost of other imaging techniques. In one study the team repeatedly imaged zebrafish expressing red fluorescent blood vessels over a period of five months.

Such longitudinal studies will enable research into potential long-term side effects of drug treatments including adverse reactions and the development of drug resistance.

"It's well known that individuals can respond differently to the same drug treatment, therefore techniques such as ours could provide valuable information regarding disease progression and drug efficacy," added Professor French.

The team are currently combining OPT with other techniques, such as fluorescence lifetime imaging, to map cell signalling processes. This could be used to monitor cell death, making it potentially useful to test chemotherapy drugs and identifying whether the drug is having unwanted side effects.