Radiative transfer is the study of the propagation of radiation through vacuum space or a material medium, subject to emission, absorption, scattering, polarisation conversion and lensing effects. We construct theoretical formulations for covariant radiative transfer, generate images and calculate spectra of relativistic astronomical objects: from the accretion disks/tori around supermassive black holes to relativistic jets in active hearts of galaxies. The study of radiative transport in strong gravity — light shining through curved space-time — is one of the special themes of our theoretical research.

Active galactic nuclei are the most powerful continuous processes in the known universe: gas accreting into a supermassive black hole at the centre of a galaxy causes intense luminosity and the ejection of bipolar jets of plasma at relativistic velocities. If unimpeded, these jets can penetrate hundreds of thousands of parsecs into intergalactic space, terminating in radio-bright lobes of plasma. However, when the jets are obstructed and frustrated by the gaseous medium within the galaxy, a complicated “meteorology” of shocks and line-emitting clouds can result. Giant starbursts, like those thought to have borne the universe's first stars, appear possible in some circumstances.

Mass range of black holes in the universe

“Ultra-compact binaries” comprise a pair of compact stars (white dwarfs or neutron stars) in a very close orbit, which can be smaller than the diameter of Jupiter and with orbital periods of minutes. They are the dominant stellar sources of persistent gravitational waves in the sky, and will be among the first sources detected by the LISA experiment. We develop models for ultra-compact binaries with spin-orbit coupling via electro-magnetic interaction. In particular, we propose the “electric star” model — plasma in the binary magnetosphere carrying currents, facilitiating energy and angular momentum redistribution in the system, leading to modification in orbital evolution and the gravitational waves emitted.

Over the last few years, X-ray observations of nearby galaxies at high-spatial resolution have revealed dozens of bright point-like sources in each galaxy, spanning a large range of colors and luminosities. They are a mixture of nuclear-burning white dwarfs, supernova remnants, accreting neutron stars and black holes, and the still unexplained “ultraluminous X-ray sources”. We seek to classify different populations and understand their physical nature. We are developing models to explain how the observed distribution of those various types of sources depends on the global history and morphology of the host galaxy, and how their brightness changes with time.

Gaseous accretion occurs when a dense stellar remnant (white dwarf, neutron star or black hole) has a main sequence stellar companion in a sufficiently close orbit. Gas is drawn off the companion and falls onto the smaller, but more massive body. The gravitational potential energy released during this infall is converted to heat, and the stream emits high-energy radiation, which are observable from space astronomical observatories such as the XMM-Newton and Chandra X-ray satellites. We study the dynamics of these accretion process, the emitted radiation, and effects on the stability and evolution of the binary system.

Dark energy is the most enigmatic content of the Universe. Added by Einstein to his famous equations to obtain a static universe, it was proved later that it does not fulfill this request and indeed our Universe is not static. Its existence and dominance in the energy content of the Universe became evident only recently. We study a class of candidate models for dark energy called “quintessence”, their possible relation with a decaying super heavy dark matter, and in the frame of such models, the particle physics of dark matter and dark energy.

Observation of particle showers produced by the interaction of cosmic rays in the atmosphere has shown that their spectrum extends to extreme energies, higher than 1020 eV. This observation is quite unexpected and a cutoff around 1019 eV caused by interaction of nucleons with cosmic backgrounds was expected, unless the sources of UHECR are close to the Galaxy. We study the propagation of these particles and some of the non-accelerating (topdown) models as their origin, as well as the possibility of a relation between UHECR, dark matter and dark energy.

We maintain an original parallelised gravitational N-body plus hydrodynamical software package, GCD+. GCD+ is a three-dimensional tree N-body/smoothed particle hydrodynamics (SPH) code that incorporates self-gravity, hydrodynamics, radiative cooling, star formation, and supernova feedback, to follow the chemical enrichment histories of both the stars and gas. Currently, we are improving modeling of star formation and feedback from supernovae, which are still highly ambiguous in galaxy formation simulations. To this end, we are simulating M33-like galaxies, and comparing them with the recent multi-wavelength observations. M33 is observed in detail in many bands, which can clarify the detailed features of star forming regions and their association with the disc structure, such as spiral arms. Key observations include UV images with NASA Swift UVOT (which was largely developed at MSSL, where we have in-house data-reduction expertise). These comarisons will provide a critical calibration of our simulation models. 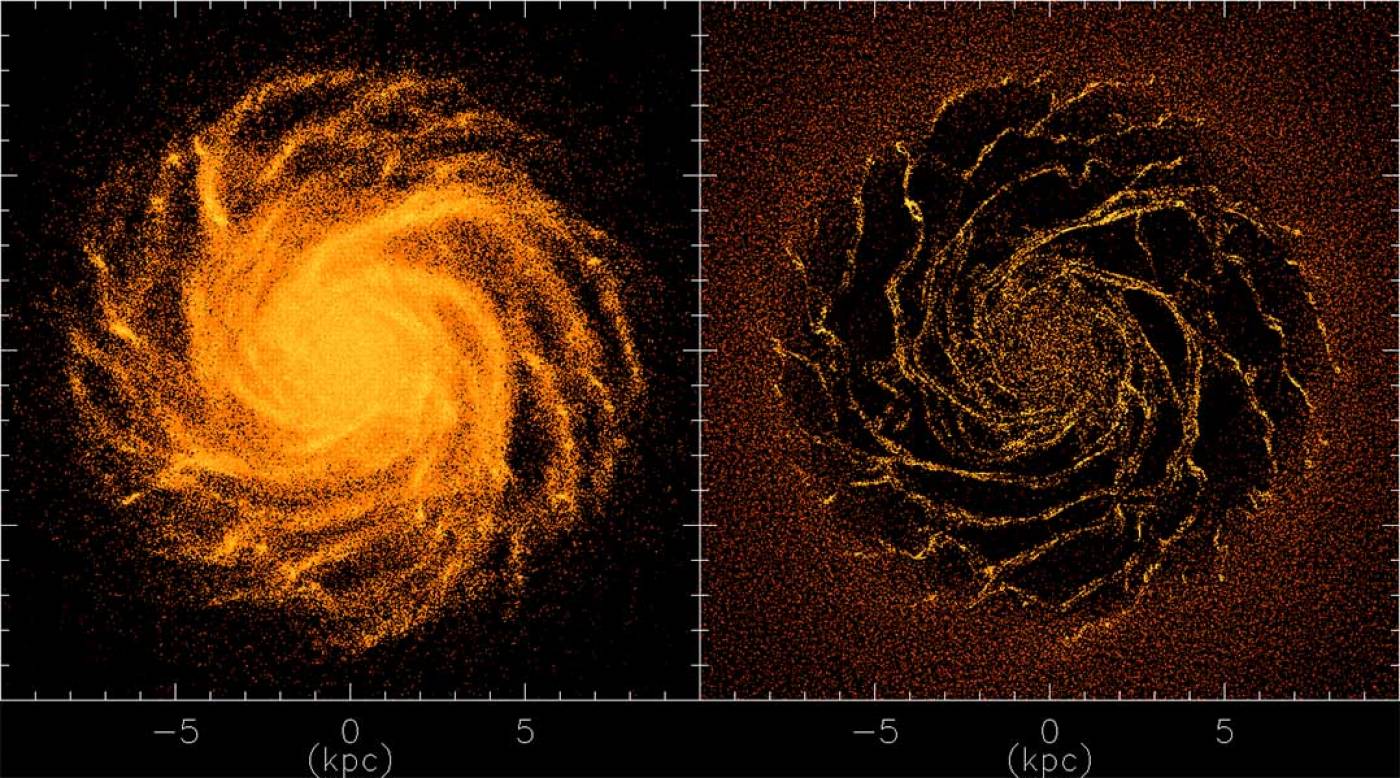 Stellar (left) and gas (right) density maps of a simulated galaxy similar in size to M33. We study how star formation is associated with gas and stellar spiral patterns, and how supernovae regulate and/or induce star formation in the disc.