ExoMars is a joint endeavour between the European Space Agency and Russia's Roscomos agency, and consists of a 2016 Trace Gas Orbiter and Schiaparelli lander, and the 2020 Rover. MSSL is leading the PanCam team to provide the rover's scientific cameras. The ExoMars 2020 Rover is scheduled to launch in 2020 and arrive at Mars in 2021.

The Martian environment presents the main technological challenges facing PanCam. Because the instrument is mounted on the rover mast, it is exposed to the fine dust which settles from the atmosphere and is exposed to a difficult thermal environment. Temperatures may fall as low as -120C, depending on latitude and season, and there is, like on Earth, constant diurnal cycling, with warmer temperatures during the day and colder temperatures at night. Even at the equator the range is quite extreme: perhaps as "warm" as 0C during the day, but falling to -90C at night. The PanCam team need to ensure that electronics and mechanical parts maintain reliable operation throughout a lengthy mission.

Like the rest of the rover, PanCam has planetary protection challenges, for example ensuring that we do not contaminate the Martian surface, not only because we want to be good planetary neighbours, but also so we do not affect the results of the biological and chemical analyses to be performed on-board. Moreover, because we are part of a sample return mission, it's important to not compromise the pristine nature of the samples to be eventually returned to Earth.

The overall goals of the ExoMars 2020 rover are to search for signs of past and present life on Mars, and to characterise the water/geochemical environment as a function of depth in the shallow subsurface. The key new aspect of the mission as a whole is the retrieval and analysis of samples from up to 2m under the oxidised surface of Mars. The strategy of the mission is:
1. To land at, or to be able to reach, a location possessing high exobiological interest for past or present life signatures, i.e., the Rover must have access to the appropriate geological environment.

2. To collect scientific samples from different sites, using a rover carrying a drill capable of reaching well into the subsurface and into surface rocky outcrops.

3. At each site, to conduct an integral set of measurements at multiple scales: beginning with a panoramic assessment of the geological environment, progressing to smaller-scale investigations on surface outcrops, and culminating with the collection of well-selected subsurface (or surface) samples to be studied in the Rover's analytical laboratory.

1. Provide context information for the rover and its environment, including digital elevation models and their proper visualisation.

2. Geologically investigate and map the rover sites including drilling locations.

4. Locate the landing site and the rover position with respect to local references, by comparison and data fusion with data from orbiters

The PanCam science team has developed a detailed science traceability matrix which links the high level goals to instrument performance.

PanCam plays a key role as part of the lander payload in several ways associated with wide angle and high resolution imaging, as mentioned above. We now consider the hardware implementation and, in broad terms, how the instrument addresses the objectives.

PanCam sets the geological and morphological context for the rest of the payload. Geological and red/green/blue filters provide a powerful camera system for planetary science.  A pair of Wide Angle Cameras (WACs) and a close-up High Resolution Camera (HRC) provide complementary imaging at different scales. PanCam can view the lander top surface and verify mechanism deployments and potentially landing pad interaction with the regolith. In the current ExoMars design, PanCam is the only instrument which can remotely sense the geological context of the landing site, provide detailed 3D terrain models and measure the surface Bidirectional Reflectance Distribution Function (BRDF).

The PanCam design for Mars includes the following major items:

(d) PanCam Optical Bench (OB) to house PanCam and provide planetary and dust protection. The OB is provided by MSSL-UCL.
The PanCam mechanical design is illustrated below. The optical bench is located on a rover-supplied pan-tilt mechanism at the top of the rover mast, at a height of ~1.7m above the surface.

A summary of the main characteristics of the WACs and HRC is shown in Table 1.
Each of the WACs includes 11 filters comprising R,G and B colour bands, a geological filter set (optimised for use on Mars) and atmospheric filters to analyse the water and dust content in the Mars atmosphere. The filter wheel and WAC camera system is illustrated below. 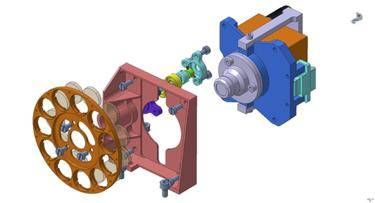 The HRC includes R, G and B filters bonded to the detector chips to provide colour information. The optical path is housed within the optical bench structure and comprises a baffle and mirror arrangement, a focus mechanism and a detector with associated readout electronics, shown below. 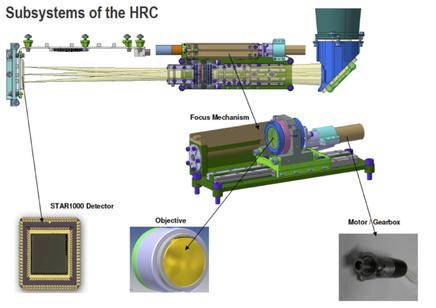 HRC subsystems : a) exploded view and b) accommodated into an Optical Bench prototype (DLR/KT/MSSL)

The PIU is the main interface between the ExoMars rover and the PanCam subsystems, and uses an FPGA implementation. The final system component is the Optical Bench, which provides a planetary protection barrier to the external environment (including HEPA filters), as well as mechanical positioning of the PanCam components. A view of the prototype is shown in below. 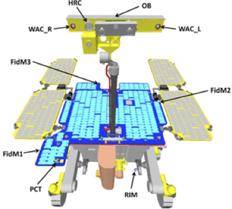 PanCam arrangement on the rover (schematic). The Optical bench is at the top of the mast, the PCT is at the front of the rover, the FidMs on the top deck and the RIM near the front bogey of the rover. 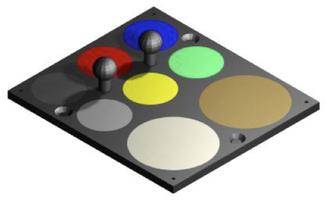 Radiometric and geometric calibration is overseen by MSSL with involvement from Aberystwyth, Joanneum Research and DLR.

In addition to the PanCam hardware components mentioned above, the ExoMars PanCam team includes a 3D vision team which provides key software and calibration support for the PanCam team.

The radiometric and colourimetric data flow and operations scenario as envisaged by the 3D vision team, for 3D vision and for colour image processing is illustrated in the two diagrams below. Some of the procedures have been tested in the field particularly during the Arctic Mars Analogue Svalbard Expeditions (AMASE) expeditions, as discussed in the next section. 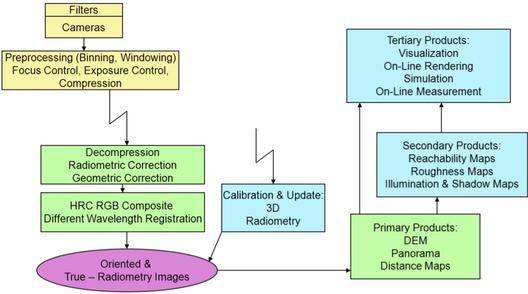 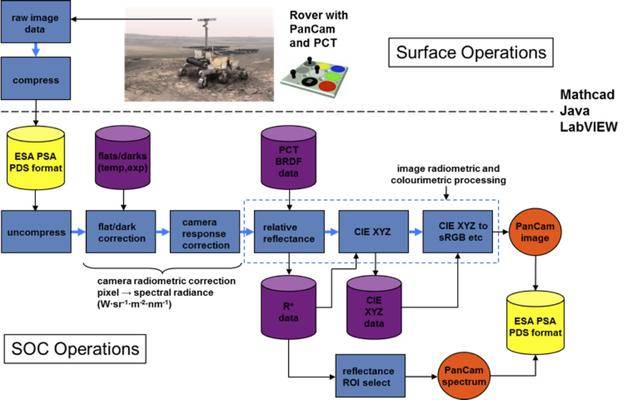 A number of ExoMars-related field trials and tests have been performed in the last few years (see Figure 7), including participation in recent Arctic Mars Analogue Svalbard Expeditions (AMASE) 2008-11. For these tests, a representative PanCam simulator was used, provided by Aberystwyth University. This simulator includes representative (though not the final) filter wavelengths from which spectral information may be used to study mineralogy. These campaigns have been used, in combination with teams from other ExoMars instruments, to develop working procedures representative of a mission to Mars, as well as to test instrument performance, develop calibration techniques and pursue scientific investigations of particular areas. These  included e.g., the Bockfjord Volcanic Complex (BVC), and the Nordaustlandet/Palander Icecap.

The AUPE PanCam simulator at tests in a Hertfordshire, UK quarry and at the AMASE campaign, Svalbard

Other PanCam ground tests have included ‘blind’ geological identifications performed in the AU Mars analogue facility, tests in a quarry in Hertfordshire with the Astrium UK ‘Bridget’ prototype rover, tests as part of the SAFER campaign, tests in Iceland in 2013 and 2015, tests in Boulby mine and tests with the Raman team in Staffordshire, UK (2015). 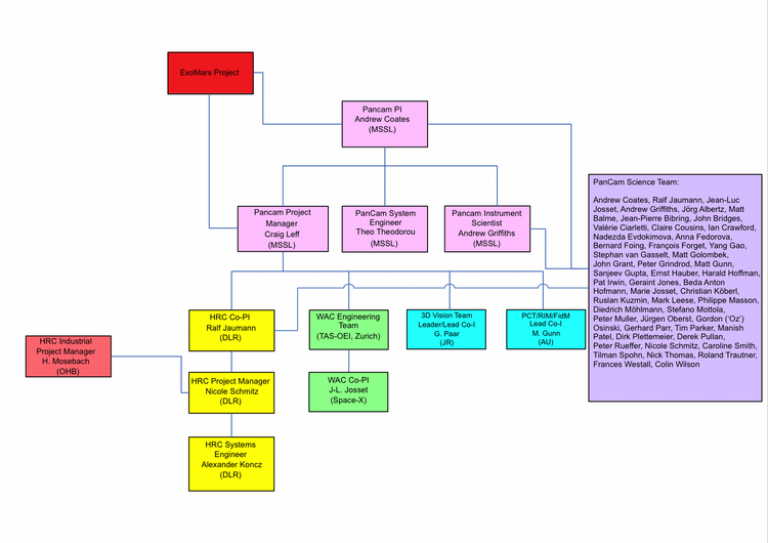