A happy gut is an anti-inflammatory gut

A new study reveals a link between the anti-inflammatory status of the gut, the happy hormone serotonin, and the consequent effect that this may have in suppressing arthritis. 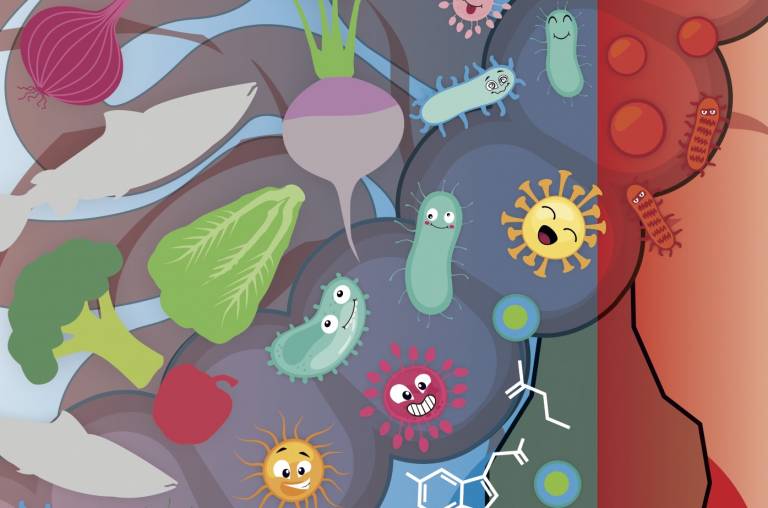 The scientific journal, Cell Metabolism publishes this April, the latest findings from Professor Claudia Mauri’s Laboratory in UCL’s Inflammation Department in the Division of Medicine. This study, co-led with Dr Elizabeth Rosser, reveals a link between the anti-inflammatory status of the gut, the happy hormone serotonin, and the consequent effect that this may have in suppressing arthritis.

Claudia Mauri, Professor of Immunology and Dr Elizabeth Rosser, Senior Research Associate’s published paper entitled ‘Microbiota-Derived Metabolites Suppress Arthritis by Amplifying Aryl-Hydrocarbon Receptor Activation in Regulatory B Cells’ should be of interest to the significant part of the global population who suffer from autoimmune diseases as it provides scientific support to the idea that eating a diet rich in fibre can help keep us healthy.

The paper shows that butyrate, a microbiota-derived short-chain fatty acid, which is produced after digestion of the complex carbohydrates present in fibre by bacteria, changes the composition of gut-microbiota in favour of other bacteria that stimulate the production of the “happy hormone” serotonin. The significance of Prof Mauri’s team findings is that the administration of probiotics and prebiotics increases serotonin, which in turn suppresses arthritis by supporting the function of a population of B cells that inhibit inflammation in autoimmune disease.

The research publication is the result of a project funded by a programme grant from Versus Arthritis awarded to Prof Mauri and by Dr Rosser’s Foundation Fellowship.  This research was the result of a collaboration between a team of 16 researchers spread across four different departments at UCL, UCLH, ICH and GOSH and a team of molecular biologists and bioinformaticians in Vienna, producing data demonstrating that supplementing the diet with certain microbiota-derived molecules may be a new treatment target for arthritis.

Professor Mauri commented, ‘This research is important as it shows that the dietary end-product ‘butyrate’, which is formed when the gut-microbiota breaks down dietary starch like for example fruit, broccoli and legumes, is reduced in patients with rheumatoid arthritis. It also demonstrates that supplementing mice with butyrate suppresses inflammation. This means that using ways to increase the level of this molecule therapeutically including the inclusion of prebiotics, pro-biotics or perhaps even dietary intervention could help to alleviate symptoms of inflammation.’

Dr Rosser continued, ‘In particular, it highlights that eating a fibre-rich diet is likely to have an anti-inflammatory effect.  Eating healthy food could contribute to boosting the immune system and fighting off diseases in general.’