The Department has a long history and we have collected a range of instruments which now form a museum. It's on the third floor of the Malet Place Engineering Building. 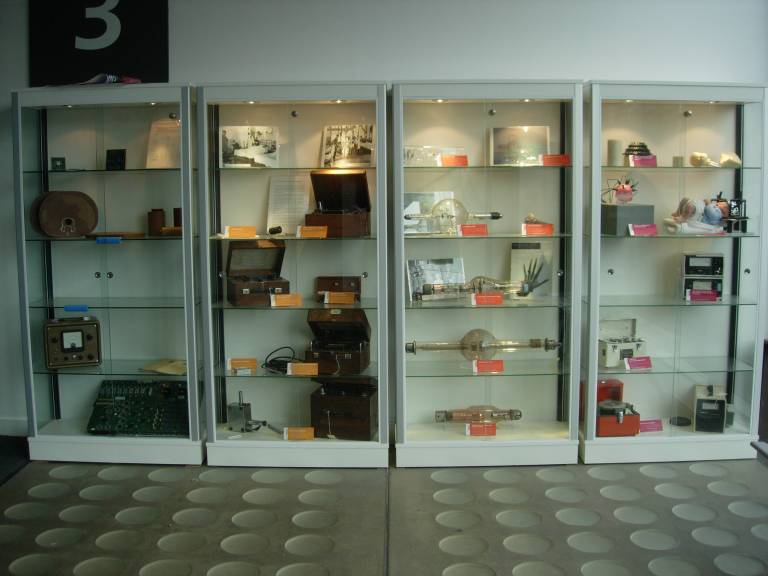 Professor Frank Farmer and his dosemeter

Frank Farmer worked in the Middlesex Hospital Medical Physics Department from 1940 to 1945. During the Second World War, he was part of a consortium of physicists who covered hospitals in London. Much of their work involved handling radium, the first widely used radioisotope. Frank Farmer realised that instruments used for measuring dose were inadequate and began to develop an improved dosemeter.

This figure shows the Farmer-Baldwin Dosemeter. In the first prototype, the ionisation chamber is charged using a needle electrode. In the second type, the ionisation chamber is connected with a cable which provides charging and readout. There is also a copy of the first commercial product, and another type which uses mains power instead of a battery. 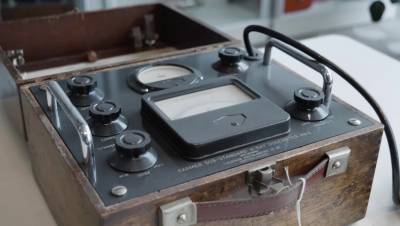 In 1945, Frank Farmer moved to Newcastle and in 1964 became Head of Department there. He continued his work on dosimetry and in many other areas of radiation physics. He was awarded the OBE in 1973 and died in 2004. 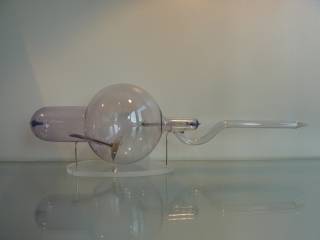 The image above is an early x-ray tube known as a Crookes tube. It was made by Newton & Co. in London, and probably dates from around 1900. Its cathode (inside the tube on the left hand side) has broken off. It is a modification of the kind of tube which Roentgen used to discover x-rays. This type of tube was used from the discovery of x-rays through to the 1920s. 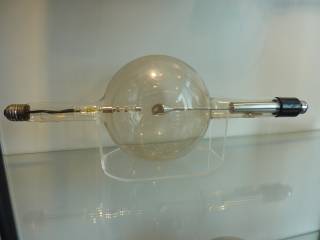 This is a later design of x-ray tube in which electrons emitted from a heated cathode, as in modern devices. Some damage to the anode can be seen, suggesting that this tube was used in the hospital. It probably dates from 1930-1950.

Our display contains a number of x-ray tubes used for diagnosis and radiotherapy, as well as a large valve used for rectifying the high voltage supply required for x-ray generation.

The Duchess of York, later to become the Queen Mother, opened the new Middlesex Hospital x-ray department on 29th May 1935. As a memento of her visit, she had a x-ray image taken of her left hand. The image is reproduced below. 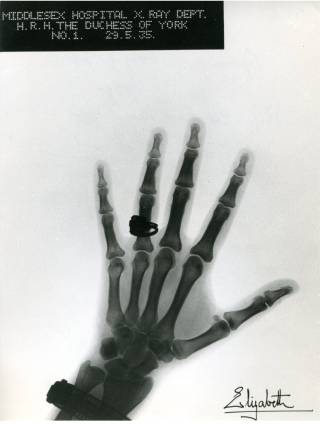 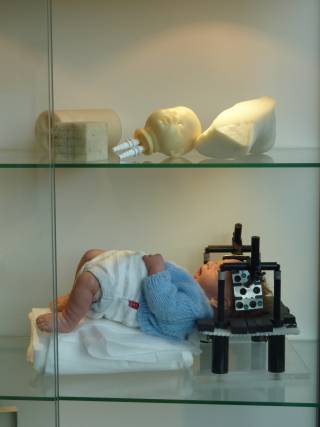 We have a display of some of the tissue-equivalent phantoms and demonstration objects used for optical tomography studies. The image above shows various anatomical test objects and a simulated optical tomography experiment which employs an optical probe holder used to image the newborn baby brain.

We also have a portable electrocardiography (ECG) system which has a paper chart recorder. It was used in UCL Hospitals, and was donated by the family of Clarissa Morse who died aged 4 on 11th January 1961.

Researchers in this department developed the first catheter tip oxygen sensors, which measured blood oxygen concentration in babies. We have some of the original modules used to power and record from these sensors.

Prof John Clifton, who later became Head of Department, designed a Grenz ray chamber which we have in our display. It is used for measuring the dose from very low energy x-rays (10-50 kV).

We would like to thank Prof. John Clifton, a previous Head of Department, who provided advice on the content of the museum, and Katie Kilmartin, Sussanah Chan and Jayne Dunn from UCL's Museums and Collections.