Nicolas Angelides has been awarded one of the first citizenship prizes within the LZ Dark Matter Experiment collaboration, for his key contributions to the construction of the detector at the Sanford Underground Research Facility in South Dakota, USA. The LZ experiment promises to be the most sensitive search for galactic dark matter scattering yet, with the construction of the detector set to complete in June 2020 for the commencement of science runs.

Since December 2018, the assembly team tallied 13,500 working hours at the Surface Assembly Lab, drawing on expertise from 250 members from 37 institutions around the globe, and from support from Sanford Lab’s scientists and engineers.

One researcher who contributed a substantial number of those hours was Nicolas Angelides, LZ collaboration member and graduate student at University College London, who presided over much of the cleanliness program for the TPC assembly.

“Dust particles can disrupt the detector signals,” said Angelides. “Dust also contains trace amounts of radioactivity, creating a background we need to control ahead of time.”

To protect against stray dust particles and radon—an atmospheric gas that could contaminate the detector—the entire assembly process took place within the Surface Assembly Lab, a laboratory space with a radon-reduction system and a class-100 clean room outfitted specifically for the TPC assembly. Within the clean space, strict cleanliness protocols are followed.

“All walls and floors are vacuumed and wiped down at least every week. Anything that can’t be wiped is put in an ultra-sonic bath, where sound waves are sent through a solvent to dislodge all small particles from every nook and cranny,” said Angelides. 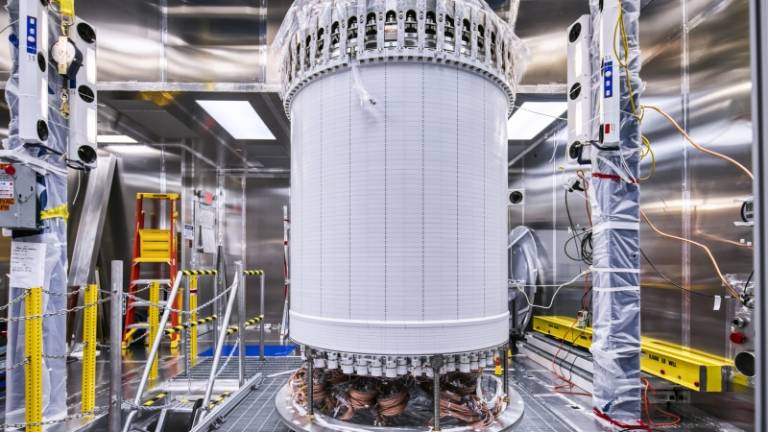 High-efficiency air filters remove dust particles, some smaller than a single organic cell. If the air-particle concentration inside the room gets too high, an alarm will sound, alerting researchers to cover the detector. Because static electricity attracts dust, the assembly area is surrounded by neutralizing fans that quickly dissipate static charge. A total of twenty-six of these fans were pointed at the TPC alone.

Workers themselves pose a contamination risk to the experiment, as humans are a major source of dust. “We wear full-coverage cleanroom suits and follow a two-stage gowning procedure,” said Angelides. “Every step closer to entering the cleanroom is held to higher cleanliness standards and requires additional levels of gear. It takes a good quarter of an hour just to get to work!”