UCL scientists are taking part in what could be the largest-scale Arctic research expedition ever planned. 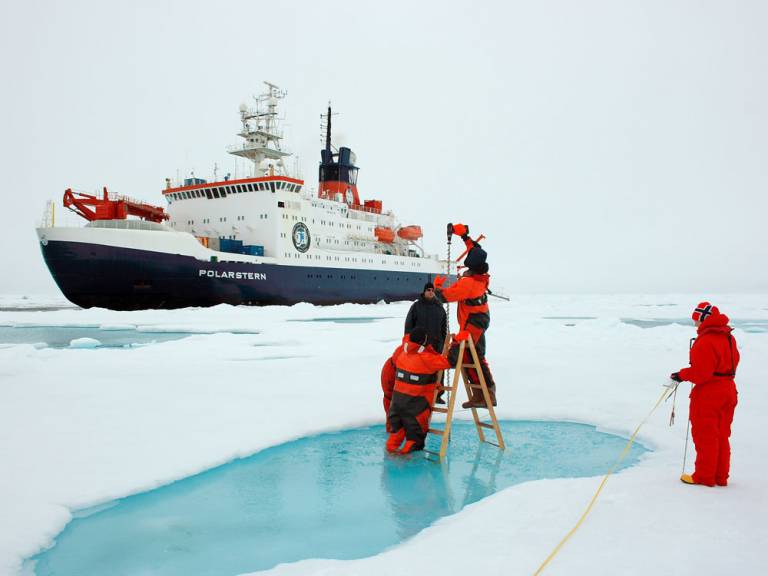 UCL scientists are taking part in what could be the largest-scale Arctic research expedition ever planned when the German research ship, RV Polarstern, is deliberately lodged into sea ice to drift past the North Pole.

Professor Julienne Stroeve who is leading this project and Dr Michel Tsamados (both UCL Earth Sciences) will join five other UK researchers on the 120m-long ice-breaker as it moves with the current in the ice across the central Arctic Ocean from September 2019 to September 2020.

They will be on board for two months, working alongside up to 600 international scientists and crew from 17 countries as part of this major international effort to better understand the fastest changing environment on the planet.

From the ship, Professor Stroeve and Dr Michel Tsamados will investigate the depth and density of the layer of snow which covers arctic sea ice to see if the radar technology used by satellites, such as the European Space Agency (ESA)'s CryoSat-2, is accurately measuring sea ice thickness from space.

Understanding how far the radar actually penetrates into the overlying snow cover will improve data on sea ice thickness and density, which currently relies on information collected in the 1980s.

Since then, the total area in the sea ice cover has declined and there is now a larger proportion of first-year sea ice in the Arctic Basin. Newer ice contains more salt than ice compacted over many years and may affect the radar signal returned to the satellite.

“Because sea ice is an important indicator of climate change, plays a fundamental role in the Arctic energy and freshwater balance, and is a key component of the marine ecosystem, it is essential that we improve the accuracy of thickness measurements from satellites. We also hope improved data will give us a stronger steer on how sea ice thickness is changing from year to year and over the long-term,” said Professor Stroeve.

The project will collect data from the autumn freeze-up, through winter snow metamorphism and summer melt using the MOSAiC (Multidisciplinary drifting Observatory for the Study of Arctic Climate) drifting station.

Spearheaded by Germany’s Alfred Wegener Institute, the €120 million MOSAiC mission aims to answer questions about the Arctic climate system and how it affects global climate models, including investigating why the region is warming twice as fast as the global average.

It is among the first missions of its kind since the 1890s, when Norwegian explorer Fridtjof Nansen attempted to reach the North Pole by drifting in a ship locked in ice. Nansen had to abandon his ship when he realised he had gone off track, but the ship itself made it across the ice cap intact and the expedition resulted in breakthrough scientific discoveries about the Arctic and weather patterns.

It isn’t the first time UCL researchers have worked in the Artic. Previously, colleagues from the Centre for Polar Observation and Modelling (CPOM) participated in CryoVex in 2010 to 2014 period to validate ESA’s CryoSat satellite measurements of sea ice thickness, while UCL researchers also formed part of the Arctic Coring Expedition (Acex) in 2004.

The Natural Environment Research Council (NERC) has partnered with the Department for Business, Energy & Industrial Strategy (BEIS), who have provided funding for ship berth fees on the MOSAiC expedition.

Minister of State for Universities, Science, Research and Innovation, Sam Gyimah, said: “Science has no borders and I am delighted that six teams of our world leading scientists, backed by our modern Industrial Strategy, have been chosen to join this international expedition.

“This government is determined to tackle the devastating effects of climate change. Through our £200m investment in polar research and our new polar ship RSS Sir David Attenborough, we will gain a crucial insight into understanding why the Arctic Ocean is warming up.”

UK Research and Innovation Chief Executive Sir Mark Walport said: “The study of the warming process in the Arctic is crucial in order to understand and predict global climate change, and this project promises to greatly enhance our knowledge in this hugely important field.

“International collaboration is essential to increase our knowledge of the planet and our impact upon it. UKRI is committed to increasing opportunities for UK researchers to consolidate and grow activity by working with their counterparts from across the world.”