The much loved London Overground (or Ginger Line) wouldn’t be here without the input of Professor Peter Hall of the UCL Bartlett School of Planning – one of the trains is even named after him! Find out more about his prolific work and dedication to town planning. 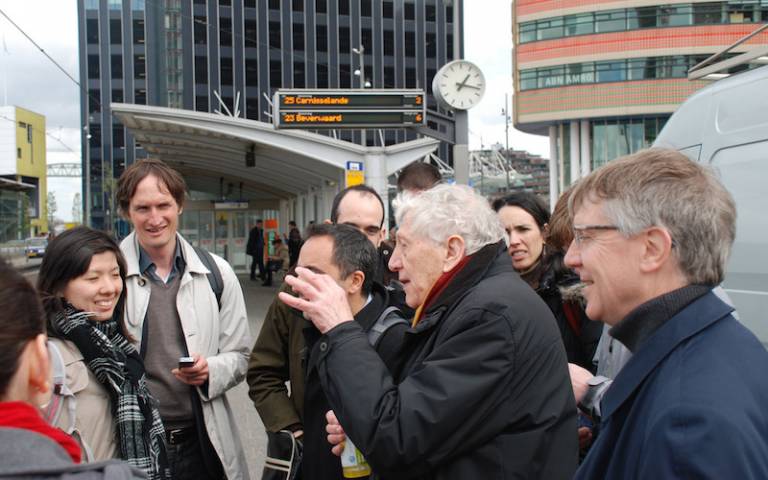 When the London Overground first opened in 2007 it was warmly welcomed thanks to the fact it connected parts of an expanding London which had previously been considered on the periphery. Passengers could travel around London rather than through the centre, and burgeoning new neighbourhoods felt more easily in reach. Travelling from Highbury & Islington in North London to Kew Gardens for example was made possible without changing between tube lines and trains.

There is also a special connection between the London Overground and UCL. In 2015 the five-carriage train numbered 378 204 was named after late Professor Sir Peter Hall, a colossus in the world of planning who taught at the UCL Bartlett School of Planning and was appointed Professor of Planning in 1992. The train was named after him in honour of his contribution to the orbital London railway, which opened in 2007.

Peter’s ideas helped shape and progress not just the London Overground, but Crossrail 1 and 2, High Speed rail and many other developments in London. Beyond the capital, the celebrated planner conceived many of the most influential planning ideas in the UK. These included enterprise zones, and the revival of interest in Garden Cities – which stemmed from his role as Chair of the Town & Country Planning Association.

Colleagues of Peter’s at UCL say he had an encyclopedic mind. According to Professor Matthew Carmona (UCL Built Environment), he also had a forensic knowledge of trains that stretched from the history of old lines and stations to knowing exactly where to get on and off the tube across London for the most efficient journey. His knowledge undoubtedly fed into the successful implementation of the London Overground, and his meticulousness and eye for detail contributed to the success of any project he touched.