Mark Thomas is Professor of Evolutionary Genetics in the Division of Biosciences and works mainly on biological and cultural aspects of human evolution.

He uses computer simulation and statistical modelling to make inferences from genetic data – including ancient DNA – and archaeological information, on processes such as past migrations and dispersals, natural selection – particularly in response to changes in diet and infectious disease loads – and how demography shapes cultural evolution. 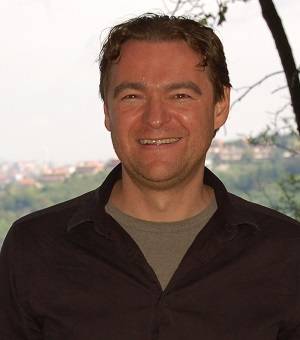 Question 1: What first attracted you to the sciences and what inspired you to specialise in the field of genetics?

Answer: Maybe it was my awe as a 5 year old watching the moon landing in 1969, or because the only TV programmes my dad would let me stay up past my bedtime to watch were about science. Whatever it was, science seemed to have the best answers to the biggest questions, and I had a firm sense of a being a sciency type by the age of 6 or 7.

Genetics is much easier to answer. My dad gave me a chemistry book when I was around 14 (I still have it). I read the chapters on amino acids and lipids, which equipped me to argue with a multitude of aunties who told me that I was so skinny because I didn’t eat meat.

The next chapter was on nucleic acids and I thought ‘Wow! What a beautifully simple mechanism’ (i.e. the central dogma of molecular biology). Around that time I was listening to the album ‘The Raven’ by The Stranglers, and the last song on side B was called "Genetix". It wasn’t their best song but it made me realise that genetics was both interesting and cool. My view on that hasn’t changed.

Question 2: If you hadn’t been a geneticist what would you have done instead?

Answer: I’m lucky enough that my work allows me to browse other cool fields like Archaeology and Anthropology. Around my mid to late teens I could easily have gone down the chemistry route – perhaps in to material science. If I had to do it all again but knowing what I know now, I’d choose Economics and Statistical Modelling, because the idea of being able to explain broad-scale patterns with simple models (i.e. a lot with a little) appeals to me. Outside academia – I think I’d make a decent mechanic or electrician.

Question 3: You were instrumental in the sequencing of mammoth DNA for the first time. Tell us about how you got involved in that and the consequences for this field of study.

Answer: Just after I started my second postdoc, in Cambridge, my boss showed me their attempt at sequencing some mammoth DNA, which had been extracted from some permafrost-preserved bones. It wasn’t great and old-style manual DNA sequencing was something I had got rather good at (it's a dead art now). So I had a go myself and it came out nicely (I still have the original x-ray films). That was all rather mechanical but it introduced me to the world of phylogenetic inference, which is populated by some damned fine minds.

Question 4: You do a lot of work about genetic ancestry testing. Have you done a DNA test and if so, did it match up with what you know of your ethnic background?

Answer: I’ve actually been rather critical of some corners of the direct-to-consumer genetic ancestry testing industry, which led to threats of legal action against me and my colleagues. But ultimately the bad guys were exposed and went out of business. Since then the technology has moved on somewhat, and good things can come from ancestry testing. But I still regularly see exaggerated claims and occasionally, out-and-out lies in what they assert can read from our genomes.

Ancestry is expansive and complex, and we are all related through common ancestors we share remarkably recently. So when I see some media claim saying such-and-such a famous person has Viking ancestors etc, I want to shout out “Well no s**t Sherlock – everybody does!”

One thing I find particularly annoying is the widespread use of the term ‘ethnicity report’ by these companies. Ethnicity is not a biological category and genes don’t have nationalities. I am concerned that they are using the term ethnicity as a euphemism for ‘race’. This is both disturbing in its own right, and bothersome because genetics shows us that ‘race’ is a biologically meaningless category. Yes, I have been given 3 tests from 3 different companies (all for free – I wouldn’t pay for that sort of thing). Surprise surprise, they all say different things about my ancestry.

Question 5: Which projects are you most proud of and why?

Answer:  I always enjoy dipping my toe into the field of cultural evolution, and am rather proud of the collaboration with Adam Powell and Stephen Shennan on Late Pleistocene Demography and the Appearance of Modern Human Behavior (2009; Science 324, 1298–1301). In my view it's a good example of explaining a lot with a little. I’m also proud of a study I published with Liisa Loog a few years ago on estimating past mobility using sparse data (2017; PNAS 114, 12213-12218), but that’s partly because I dreamed up the analysis methodology while drunk.

Question 6: What advice would you give to any budding geneticists?

Answer: Learn about something seemingly unrelated to genetics, then try to relate it to genetics.

Question 7: What’s your next big challenge in terms of your research?

Answer:  I am part of an EU synergy grant, along with Professor Stephen Shennan in the Institute of Archaeology and collaborators in Copenhagen and Gothenburg. The idea is to integrate archaeological and genetic data – particularly ancient DNA – in an explicit model-based framework. It's an exciting task that promises some amazing new insights into European pre-history, and we have some fantastic people on board, but there will be some considerable challenges.