We asked members of the UCL community to recommend books to celebrate Black History Month.

We were looking for books that celebrate Black History in all its diversity and that will educate and enrich the UCL community.

We received many suggestions, including several books which had multiple recommendations.

Girl Woman Other by Bernardine Evaristo

"This marvellous story focuses on black British female experiences, giving the reader an insight into many varied ways of being black British and female and towards the end of the book also exploring our historical presence here on this island. I am a voracious reader and I have never read anything like it. The book jointly won the Booker Prize in 2019 with 'The Testaments' by Margaret Atwood, which in my opinion is dwarfed by the innovative form and content we see in 'Girl Woman Other'. A must read, absolutely gripping!"

The Lonely Londoners by Sam Selvon

“This book documents the trials and tribulations of a group of West Indian immigrants to London in the 1950s. Beautifully written, it is thought provoking, hilariously funny and at times quite sad.”

“Probably the best novelist from Granta's "Best of the Young British Novelists" in 1983, Emecheta is less well known today but she is getting due recognition again. She was born in Nigeria, before moving to the UK with her husband. Her marriage was unhappy and her husband violent, so she left him at 22 and brought up her children alone. She understood at first hand the reality of British society and wrote about it with unblinking honesty. A truly great writer.”

“Alexander Pushkin is well-known as the quintessential Russian writer, but Pushkin's African roots have often been denied or passed over in current Russian ultra-nationalist rhetoric. As a writer Pushkin took particular inspiration from his African great-grandfather, General Abraham Petrovitch Gannibal. Pushkin used him as the model for Ibrahim, the lead character in his unfinished novella ‘The Moor of Peter the Great’. An excellent study on Pushkin & Africanness was published under the title: Under the Sky of My Africa: Alexander Pushkin and Blackness, edited by Catharine Theimer Nepomnyashchy, Nicole Svobodny, and Ludmilla A. Trigos.”

The Hate U Give by Angie Thomas

To Kill a Mockingbird by Harper Lee

Tom Robinson is wrongly accused of a crime in a small town in Alabama during the 1930s. This novel is told from the viewpoint of Jem, the daughter of Tom’s lawyer. A much read novel.

Kindred follows Dana, a writer who travels back in time to the antebellum South and meets her ancestors, a white plantation owner and a Black slave. Butler is now considered one of the most important Sci-Fi writers of the twentieth century.

“The story spans over three hundred years, following the lives of two sisters one who is married to a coloniser and one who is enslaved in Ghana, we follow the lives of the descendants of these two women to the present day. Beautiful and full of so much pain. I could not put this book down.”

“It's the story of the descendants of two sisters over seven generations, and by the end I had a vastly better understanding of slavery's history and horrors and its impact on us now.”

“Beautiful and informative novel of different generations and experiences of blackness.”

Dark Matter: A Century of Speculative Fiction from the African Diaspora (Kindle Edition)

“Short stories of Afrofuturism: sci fi, fantasy, and speculative fiction by black American writers. In turn funny, challenging, mind-bending and haunting. Lots of highlights and names to follow up!”

The Carpet Weaver by Nemat Sadat

“If you liked Khaled Hosseini's 'The Kite Runner' and 'A Thousand Splendid Suns' and would like more of Afghanistan, then I recommend this 'coming of age' book set in the 1970s before war broke following the Russian invasion and the aftermath. Forbidden (gay) love between two friends will have you on an emotional rollercoaster to the end.”

“A story of two friends set between London and Gambia, a magnificent work by one of my favourite authors.”

The Fire Next Time by James Baldwin

“It is an extremely well-written and searingly honest account of what life was like for the author growing up as a Black, gay man in the United States of the early 20th century, as well as his hopes for social change.”

Do you remember Olive Morris? by the Brixton Black Women's Group.

“Olive Morris was an important political figure in Britain in the 60s and 70s who fought racism and sexism in Britain and around the world. A reintroduction to her life and work is necessary.”

The Biography of Malcolm X

“A very powerful autobiography, written with the help of Alex Haley who also wrote Roots. An inspiring story of personal redemption and community empowerment.”

The Interesting Narrative of the Life of Olaudah Equiano

“Written in the Eighteenth century, this book still packs a punch. Olaudah remembers his capture in West Africa while playing with his sister as a child and the horrors of the Middle Passage and slavery in America and England. He became a successful businessman and an important abolitionist. His book was an important account in the struggle against the British slave trade.”

“I read about George Washington Carver when I was a teenager. He was really very unique and gained respect for what he did as an individual, defying expectations and going his own way.”

Barracoon: The Story of the Last "Black Cargo" by Zora Neale Hurston

"Non-fiction, ethnographic work by America's influential folklorist and anthropologist Zora Neale Hurston. The book is based on Hurston's interviews from 1927, with the eighty-six-year-old Cudjo Lewis, the last presumed living survivor of the Atlantic slave trade's Middle Passage.”

Widely considered the most important work by Angela Davis, this book covers U.S. history from the slave trade and abolitionism movements to the 1960s women's liberation movements.

Ain't I a Woman? by bell hooks

hooks examines the effect of racism and sexism on Black women in the U.S from suffrage to the 1970s.

Natives: race and class in the ruins of empire by Akala

"A powerful thought-provoking book which challenges main-stream historical analysis and interpretation. It is informative with cogent arguments on the complex dynamics of race and class whilst incorporating the author’s personal journey. Fascinating and disruptive, Natives encourages discussion. You’ll either disagree or possibly change your perspective and even decide to research further."

“It's personal, historical, political, and it speaks to where we are now.”

The New Age of Empire by Kehinde Andrews

“A greatly informative new book from Kehinde Andrews who is the first black studies professor in the UK and one of the leading academics in the field. It's an accessible read which looks at global inequality today and traces it back to its roots in the colonialism of the British Empire. Andrews presents radical solutions to the racist global order we live in today.”

Black and British: A Forgotten History by David Olusoga

"It is a very insightful book regarding Black history, which did not get taught when I was at school."

“It’s easy to forget that Black British History is over thousands of years old, longer than English history! These two books reveal different aspects of this long story which people might not be so aware of.”

Hidden Figures: the untold story of the African American women who helped win the space race by Margot Lee Shetterly

“The book that became the hit film. Really interesting.”

Cut from the Same Cloth? Muslim Women on Life in Britain by Sabeena Akhtar

“I was recommended this book by a friend, she heard some of the contributors speak at an event. Reading the different chapters by different women shows how diverse being a Muslim woman is. Being a Black Muslim woman and talking about your experience and how you feel is important. First book of its kind documenting a collective of Black, Asian and Other Muslim Women. I am learning a lot.”

When We Ruled: The Ancient and Mediaeval History of Black Civilisations by Robin Walker

“This is an exceptionally well written and fully comprehensive work. Extremely informative and easily accessible.” 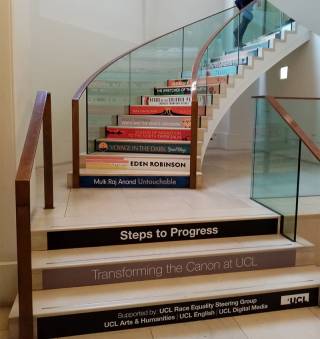 Find out more about the different events taking place this year at UCL to celebrate Black History Month.