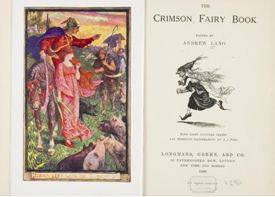 Image: Title-page and coloured frontispiece from the Folklore Society's copy of Andrew Lang's Crimson Fairy Book, part of a larger series associated with Christmas in the Victorian period

UCL has outstanding collections of over half a million rare books, manuscripts and archive items, and this year, for the first time, we have created a digital advent calendar illustrated with some of these treasures for you to view something special.

Some of Special Collections' treasures can currently be seen up close in several places:

This exhibition explores the relation between technology and art. Exhibits from Special Collections include an early weather chart for each day of December in 1861 (from our Galton Archive), a memoir in which Jeremy Bentham describes a formative childhood experience involving earwigs, candles and death to which he ascribes the development of some of his social and political views, and a set of recipes devised by Bentham for feeding prisoners (both from our Bentham Archive). Visitors can try their hand at transcribing Bentham documents using the Octagon Gallery's innovative digital technology, or you can do this from home by visiting the Transcribe Bentham website.

Highlighting black history in Bloomsbury between 1914 and 1948, this exhibition includes photographs and documents from Special Collections, UCL Records Office and the Slade Archives as well as art work from the Art Museum.

18th Century Recipe on the Menu at a top London Restaurant

Jeremy Bentham didn't only produce designs for his ideal prison; he also devised a set of recipes for feeding its prisoners. If you visit the Digital Frontiers exhibition, you'll be able to see the manuscript from Special Collections in which he sets out and budgets for these recipes. You'll also be able to see a photograph of what happened when Dr. Tim Causer, Research Associate at the Bentham Project cooked one of Bentham's dishes. To Tim's surprise, Bentham's prison recipes came to the attention of a top London restaurant, and you can now order a reputedly delicious prison pie of potatoes, tripe, lung and spleen from the menu. To find out more, watch this BBC report.

On 1 August 2013, UCL Press formally became a department in UCL Library Services. We have also appointed our new Publishing Manager, Lara Speicher, who has joined UCL Press from the Publishing Department of the British Library.

UCL had previously held a UCL Press imprint, which it had licensed to commercial publishers. This imprint had passed through a number of hands until it was formally repatriated into UCL earlier this year.

The UCL Press will serve a number of functions. First, it will develop Open Access publishing services. This will allow UCL to claim a place in the publishing arena - UCL is one of the few global research-intensive universities not to have its own University Press. Second, the Press will act as an umbrella for other, small publishing activities which are already based in UCL, mainly in the Arts, Humanities and Social Sciences. UCL Press will be able to offer shared services, such as business planning, communications and marketing activities.

Two Open Access journals are already published by the Library and these will be brought under the wing of UCL Press:

One of the first activities for UCL Press will be to advertise this journals service more widely, to encourage the creation of new journals and to offer publishing opportunities to UCL students.

UCL Press will also publish monographs and we are in discussion with a number of European publishing partners to create shared publishing infrastructures for Open Access monographs. We will also be investigating new monographs formats which are being proposed by academic colleagues. UCL Press is also interested in textbooks. We know that a number of UCL academic departments produce their own textbooks and this is an area in which UCL Press could make an offering to help support teaching and learning.

University Press activities, embedded in research-based libraries, enable research libraries to re-invent the offering they can make to their university. Libraries can become active producers of knowledge and information to support teaching, learning and research. It is a very exciting time to be part of such a venture.

UCL Library Services is pleased to co-host this visiting exhibition from Tohoku University as part of the celebrations taking part in 2013 to mark 150 years since the arrival of the 'Choshu 5' at UCL, the first citizens of Japan to travel abroad for a university education.

Natsume Sōseki (1867-1916), born Natsume Kinnosuke, is considered to be both the most famous novelist and also one of the first to study English Literature in Japan. Initially a teacher, he had an opportunity to visit Britain to study English from 1900-1902. During his time here, he attended classes given by Professor William Paton Ker at UCL, and took some private lessons with William James Craig. He also spent a lot of time in museums and theatres, and is known to have visited Pitlochry, while at the same time reading extensively and building up a considerable library. Items on display include guidebooks and magazines that he owned, as well as his personal diaries and papers.

By the time of his return to Japan, Sōseki had become preoccupied with the question, 'What is literature?', and started to write his own fiction. His first novel, I am a Cat, was initially published in serialized form in 1905. More novels followed over the next 10 years, until his early death in 1916. His works, several of which can be seen here, are regarded as masterpieces and are still widely read.

Tohoku University Library holds the Natsume Sōseki collection, an archive of his manuscripts and some 3,000 books that he collected. This exhibition allows us to see and enjoy a selection of these rare and fascinating materials, curated by Mika Yokoyama, Hitomi Fukui and Toyokazu Kidoura.

The exhibition is located in the Main Library and opened with a visit by His Excellency Keiichi Hayashi, Ambassador Extraordinary and Plenipotentiary of Japan and the President of Tohoku University, Susumu Satomi, on 21 November. The exhibition will run until 18 December 2013 and there is an accompanying pamphlet to download.

The Telotype: Francis Galton's Forgotten Contribution to the Communications Revolution

Western Union discontinued all telegraph communicating in 2006 and so ended over 160 years of messages being sent by combinations of dots and dashes, the Morse Code that everyone of a certain age is aware of. The dots and dashes were translated into words by the telegraph man so that the recipient could understand what the sender was trying to tell them. Sometimes, because of interference (crackle on the line), the translations were wrong. It has always been believed that no way was ever found to translate the electrical signals directly into words on a page but an article by Francis Galton entitled The Telotype; a printing electric telegraph published in June 1850, a copy of which is now bound with 11 other articles in the Galton Collection, demonstrates just that. As he explains:

"In the Telotype (as our instrument may be termed), by merely touching a key on which any letter is marked that letter is to be printed, almost instantaneously, at the opposite end of the line. If the types lie thus in order : a A 1, b B 2, c C 3, and so on ; and if u influences the slide nearest the diaphragm of K, and v influences the other, then evidently if we make the successive signals u a, A and A only will be printed ; if v, a, l will be printed ; if u, v, B ; and so on."

The article is accompanied by four folded plates that illustrate the machine which a steampunk novelist would drool over but this is not the stuff of fiction: a reliably working typewriter wasn't invented until 1868 and Alexander Graham Bell obtained his patent for the telephone in 1876. Then, of course, there were computers and the Internet (from 1993). Galton says of telotypes "…most large houses, public and private, would soon become supplied with them." In 1850 most houses weren't even supplied by the postman so he seems to have anticipated the communications revolution long before anyone else even had the slightest inkling of it.

I've been at UCL for a number of years and enjoyed a double life as both an Archaeologist and a Librarian. I completed a PhD at the Institute of Archaeology and then worked as a Continuing Education Lecturer, teaching Archaeology to members of the public in wet muddy fields wearing waterproof trousers, before moving sideways into librarianship, ending up almost inevitably back in Archaeology. My current job focuses on running the Issue Desk and reader service at the Institute of Archaeology Library, but as Chair of the Outreach and Engagement Working Group for Library Services, I'm also able to keep up my previous interest in making education accessible and interesting to everyone.

One of my key research interests as a Librarian is making our archives and rare books more accessible to audiences, and last year I took part in UCL's new public Festival of the Arts, when I gave a lecture on a former Director of the Institute of Archaeology, Vere Gordon Childe entitled "'28/30 Good'. Accessing Gordon Childe and the Institute of Archaeology through Student Records: Archives, Memory and Nostalgia". We have many fascinating archives and treasures in UCL Library Services and have lots of plans for lectures and events - none of them involving Librarians in plastic trousers.

Over the Summer the Action on Hearing Loss Library (formerly RNID Library) contributed to an exhibition in the North Cloisters that we hope many of you will have seen. For those of you who do not know, Action on Hearing Loss owns the book collection but the Library is run by UCL alongside the Ear Institute Library. The idea of the exhibition, organised by UCL's Deafness Cognition and Language (DCAL), was to produce a timeline to show the development of British Sign Language. As well as contributing items from the historical collection we wrote notes to explain those items and help put them into context. With the help of lottery funding DCAL has now made much of this material available online. 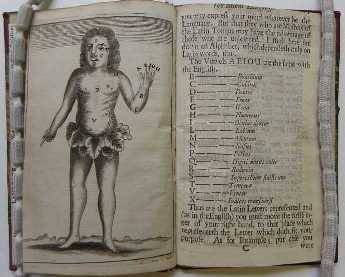 Anyone who has read our Library Blog will probably note that we used many of the display notes along with photographs of the items, when the exhibition was on.