Getting to know....Dr Luke Seaber 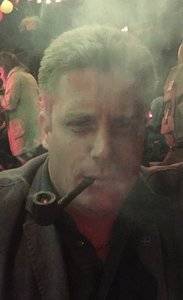 1. What does your job involve?

2. How long have you been at UCL? What did you do before this role?

I've been at CLIE since 2014; for the two years before that I was a Marie Curie Research Fellow in the English Department here, working on the first full critical history of British incognito social investigation texts. Before that I taught in various Italian universities for eight years.

3. What do you most enjoy about your position and why?

I have the chance to do research-led teaching with enthusiastic and intelligent students, and have full freedom of syllabus design - I can focus on a far more interesting range of texts than would usually be the case!

4. What are you working on at the moment?

I'm at the early stages of a project on allusion in twentieth-century literature: how it provides a connection between what is textual and what is extratextual, and how that connection changes over time. Thanks to Google and its like an increasingly vast number of allusions that were previously only accessible to a deliberate minority of a writer's audience are potentially easily available to any reader: I'm interested in what this says about the relation of reader to text over time. It's early days, but authors I'm currently thinking about include M.R. James, George Orwell, Evelyn Waugh, T.H. White, T.S. Eliot, J.R.R. Tolkien, Jorge Luis Borges, Umberto Eco and James Ellroy

5. What working achievement or initiative are you most proud of?

Most recently, I finished and published the book I was working on for most of the last five years, Incognito Social Investigation in British Literature: Certainties in Degradation. This is the first full critical history of it subject, texts detailing their authors' experiences when they pretend to be poor, a genre that began in 1866 with James Greenwood's 'A Night in a Workhouse' and has as its most famous example Orwell's Down and Out in Paris and London, both texts I teach on my course.

6. What's your favourite film and book?

I have no idea - there are too many of them! The film I re-watch most is almost certainly Paolo Sorrentino's Il divo (2008); the poets I return to most are probably Tennyson and Hardy (and Brecht, given the current political atmosphere); the two writers from whom I've learnt the most are likely to be George Orwell and G.K. Chesterton; I suspect the greatest masterpiece I've ever read is Cesare Pavese's Dialoghi con Leucò. But favourites? Depends on the moment you ask me.

7. Who would be your dream dinner guests?

I like food, and very much sympathize with what Nubar Gulbenkian was reputed to have said - 'the best number for a dinner party is two - myself and a damn' good head waiter'. Now, if it were about whom I'd like to go out drinking with…

8. What would it surprise people to know about you?

I can never tell left from right without looking at my hands to think for an embarrassing amount of time.

9. What's your favourite place in the world?

Probably the Apennines between Emilia-Romagna and Tuscany, as well as my home town in Cornwall.

10. Anne's question for you from the last newsletter: "If you were a mode of transport, what would you be?"

I have no idea, but as a scholar of the British 1930s by training and inclination, probably an Austin 7.

11.What's your question for the next colleague?