UCL students were able to feedback their experiences directly to the scheme founder, as one of six participating, universities. 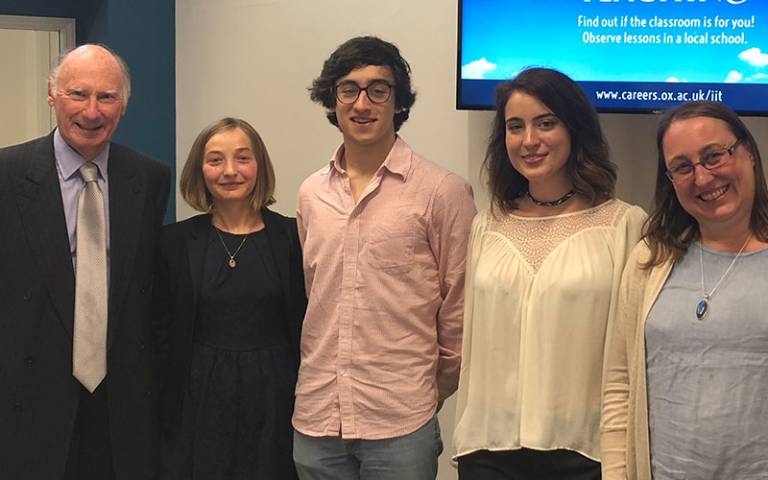 The meeting, chaired by the founder of the scheme Lord Laidlaw, was an opportunity for the six participating Russell Group universities to share best practice.

The Universities of Columbia and Toronto, Trinity College Dublin and Tufts were also represented and will be joining the Laidlaw Research and Leadership Programme in the 18/19 academic year.

The three students from UCL were:

The students gave a positive assessment of their experiences as Laidlaw Scholars.

Teodora said “… all of our speeches were accompanied by smiles, laughs, nods and questions. Then, a lady told us that hearing our thoughts about the programme had got her excited and empowered to deliver it in her university.”

Maria commented, “It was a real privilege to meet Lord Laidlaw and staff from universities that also joined the Laidlaw scholarship scheme. It was also wonderful to see so much interest in creating a global network of scholars and I certainly look forward to meeting scholars from other universities in the future!”

Developing the next generation of leaders in research

As part of their two-year scholarship, the Laidlaw Scholars receive tailored leadership training which emphasises communication skills alongside a multi-faceted approach to leadership.

Daniela Bultoc, Head of Communities of Practice, has helped design and deliver this training since the start of the Laidlaw scholarship at UCL.

She also attended the Oxford meeting and commented:

"It was really rewarding to hear from our three UCL Laidlaw scholars who presented at the meeting in Oxford in front of Lord Laidlaw and all the partner institutions. The students were professional and truly inspirational in how they developed and applied their leadership skills in various contexts related to their research and beyond. I could say that we've witnessed the 'Laidlaw spirit' of tomorrow's leaders in action".