How a Laidlaw scholar contributed to my research on Brexit

Oliver Patel, Manager and Research Associate at the UCL European Institute, was assisted by a fully-funded undergraduate researcher this summer, through UCL’s Laidlaw Research and Leadership Programme 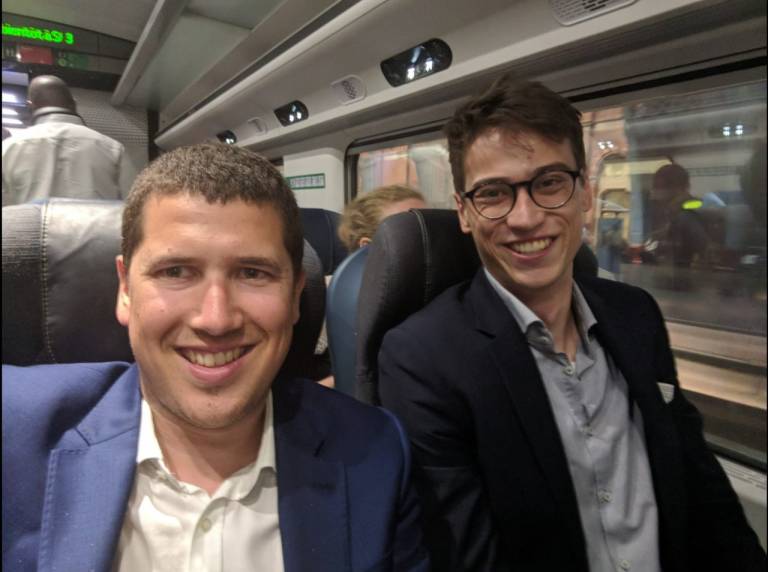 Oliver’s research currently focuses on the political, constitutional and legal aspects of Brexit, as well as the future of UK-EU data flows and data protection policies. He also helps to coordinate UCL's academic response to Brexit, through managing the UCL Brexit Hub and UCL Brexit Blog.

Through a competitive selection process in his first year, Anton had been selected to be among the first cohort of Laidlaw scholars.

His first summer project (Laidlaw scholars undertake research in the summer breaks of their first and second years at UCL), also at the UCL European Institute, was Brexit-related too, investigating political culture and strategic approaches in the Brexit negotiations.

The report he contributed to has recently been published: "Cultures of Negotiation: Explaining Britain’s hard bargaining in the Brexit negotiations", Dahrendorf Forum.

Taking an active role in research as a Laidlaw Scholar

We wanted to map out the different types of ‘data-relationships’ which the EU has with third countries (non-EU countries), in order to assess the various options for the UK’s future relationship with the EU in this domain.

We were particularly interested in the nature of UK-EU data flows, their importance to the digital economy, and whether Brexit poses any risks. Finally, we assessed the extent to which progress has been made in this part of the withdrawal negotiations.

Anton carried out desk research – reading and summarising policy briefs, reports and papers – and compiled a list of more than 300 potential interviewees who we could contact to gain expert insight.

From the list of MPs, MEPs, civil servants, regulators, academics, technology executives and policy officials, Anton helped to set up twenty interviews, mostly in Brussels, but some in London too. He coordinated the entire interview process with each participant, and organised the full three-day trip to Brussels.

He helped to draft the interview questions, based on the subject’s area of expertise, and took notes and recorded each interview. He even conducted a few interviews on his own, as well as a few with me. Returning to London, he transcribed all the recordings and consolidated the meeting notes.

A research project leads to employment

Anton is extremely capable. His organisational skills were impressive, and he ensured that the research trip was smooth and successful.

His ability to engage with and interview high level officials was also impressive, as the interviews often required quick thinking and instant analysis under pressure, which he capably provided.

Soon after the end of this project, Anton has was offered paid work as a Research Assistant with the Department of Political Science at UCL. Hopefully his experience on this project at the UCL European Institute was useful in this regard!

Anton’s contribution was invaluable. Without him there would have been no interviews. He secured every interview, arranged them, conducted some of them and transcribed all of them. As the interviews are the bedrock of this research project, we couldn’t have done it without him!

Easy, flexible process as part of the Laidlaw Research and Leadership Programme

The Laidlaw Programme is extremely flexible in every aspect - choosing a project, managing the scholar, changing the timings, using the budget and so on. The team was fantastic and extremely helpful.

The European Institute will certainly continue to undertake extensive research on Brexit, and we would be delighted to host future Laidlaw Scholars.

Our experience has been overwhelmingly positive.

If you have a project which would suit a high performing first year undergraduate, read more in Information for Supervisors