Please see our news page for information on our latest exhibition "Queen Square: at Work and Play"

The founding and early years of the National Hospital, Queen Square.

The first ever exhibition in the new Library took as its theme the founding and early years of the National Hospital. Featured are original letters and documents, shell ornaments made to raise money, accounts of the earliest patients, and examples of some harsh rules. The exhibition provides a unique insight into life as a Victorian lady with a mission to raise money for a worthy cause, and the experience of the early patients who would otherwise have been condemned to the workhouse or the lunatic asylum. 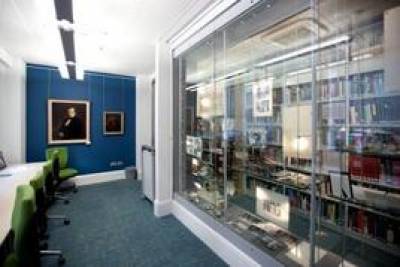 An idea for a Hospital

Just over 150 years ago, Johanna, Louisa and Edward Chandler (their portraits are on display in the Library and Louisa is in the Gallery, 33 Queen Square) were living at 153 Albany Street, Regent’s Park. When their grandmother was paralysed by an illnes, the Chandlers realised the dreadful lack of facilities, medical and nursing, that existed at that time for looking after chronic neurological patients, and that if it was a calamity for them, the plight must be worse for those in humble and poor circumstances. 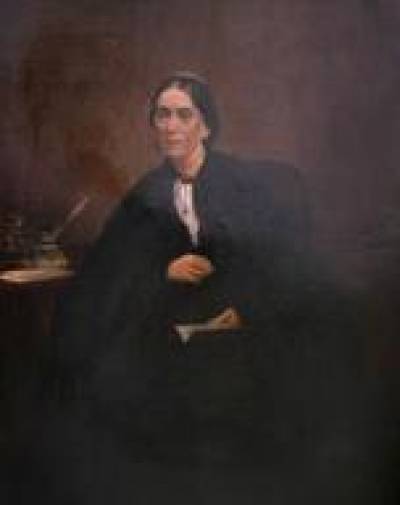 Louisa, Johanna and Edward Chandler were determined to fill this gap. Johanna Chandler also realised that there was no provision for the care and treatment of people suffering with epilepsy, except in “lunatic asylums”.

For the next few years, the two sisters made and sold to friends artificial flowers and ornaments made of Barbados rice shells, strung together with pearls and white glass beads, and succeeded in raising about £200.

On display: Shell ornaments made by the Chandler Sisters to raise money to found the Hospital. Circa 1858 Reticules (purses) and stamps made to raise money by the Ladies

Fundraising
In 1859 they approached the then Lord Mayor of London, David Wire, who himself was partially paralysed.

On display: Originals & transcripts of the surviving early letters. Invitation to a garden fete, soiree and sale of fancy goods, Frognal Park Hampstead, 4th June 1896. Coverage in the Daily Courier, 6th June. Examples of appeal letters from the Chandlers.

David Wire The Lord Mayor was sympathetic and enthusiastic; he got in touch with his influential friends and business acquaintances, and interested them in the project. It seems that the Chandlers wished to establish a home for “incurables”, but crucially for the future of the Hospital, Wire insisted on providing a hospital in which active treatment of disease could be carried out.

On display: Prospectus and appeal letter from Johanna and Edward Chandler. The prospectus mentions an appeal for an Asylum, for Medical Assistance and for Pecuniary Assistance. This was later changed to a Hospital at the insistence of Alderman Wire. Original Minutes of the Board of Management. A picture of Alderman Wire.

David Wire and Louisa Chandler didn’t live to see the Hospital they had helped so significantly, become established. Louisa died towards the end of 1859. She is commemorated in a stained glass window on the stairs of the Hospital. David Wire died in 1860 not long after the Hospital opened, having been instrumental in raising the funds and establishing the future course of the Hospital. Johanna Chandler continued to work tirelessly to raise funds for the Hospital and its patients, right up until her death on 12 January 1875 aged 55. After her death, Edward became less active in Hospital affairs. He died in 1881 aged 66, shortly before the opening of the first phase of the new Hospital in Powis Place.

In 1860, patients were found and admitted, and there is a note in the minute book, dated March 14th, 1861, to the effect that Mary Warwick of No. 7 Hayes Court, Soho, the first patient received in the hospital was discharged cured, and she tendered her thanks for all the benefits received. Patients were admitted on recommendation of a physician but only following approval of the Board of Management, and after having been seen as an out-patient. Donations were encouraged and actively sought. A strict admission rule of the Hospital was that patients were only eligible if there was some chance of improvement. “Persons to whom treatment offered no prospect of benefit were excluded”.

Extracts from the Board of Management minutes.

Mr Mason, Treasurer of Queen Square Gardens have sent in a complaint signed by the Inhabitants of the Square against patients sitting at the end of the street. It was resolved that the receipt of the letter be acknowledged.

Miss Hunt of Edgware having applied for her Sister’s admission as an in door patient and offered to pay 10 shillings per week with her. It was resolved that from circumstances named at the Board it was not a fit case for the Hospital.

It was resolved that Henry Hall, engine driver from Cardiff be admitted as an in door case on Dr Ramskill’s recommendation and that the Directors of the Taff Vale Railway Company be solicited for a donation.

Mrs Wynne of Rochester having applied for the admission of a poor woman as an in door patient. It was resolved that the case must be first seen here by physicians who will report it to the Board of Management.

On display: Rules for in-door patients. Rules for out-patients. Photographs and drawings of the first hundred years of the out patients Hall. Case notes from the National Hospital Collections. This case is of a four year old boy, under the care of David Ferrier. He had been suffering from “epileptiform convulsions” from the age of 2 ½. He was admitted on October 8th 1886, and discharged following surgery carried out by Sir Victor Horsley, on 8th November 1886.

On November 2, 1859, David Wire called a special meeting in the Egyptian Hall of the Mansion House, attended by his wealthy and influential contacts. At this meeting £800 was raised, and with this sum it was decided to found a special hospital for the investigation, care and treatment of patients suffering from paralysis and epilepsy.

A small committee was formed, with the Lord Mayor as chairman, and one of its first tasks was to find suitable accommodation. It was resolved to make a public appeal urging the needs of the Institution, and to defer opening until £5000 had been raised. Remarkably, this was achieved in only a very few months.

By the spring of 1860 they had found a house available at 24 Queen Square, which they leased at £110 a year. Sufficient funds had by then been raised, and this is where the National Hospital for the Paralysed and Epileptic was opened. It had 8 beds for females, the front and back parlour were converted to be used as consulting rooms and the waiting area for out-patients, and the butler’s pantry became the pharmacy. A ward for male patients was opened in June 1860.

On display: Images of the earliest buildings and interiors.

The Hospital rapidly ran out of space, and in 1866 the next door house was purchased and the buildings were adapted and equipped at a cost of £4000.

In 1870, the Hospital was the first to “venture on the establishment of a Country Branch”. The Convalescent home in East Finchley.

The Hospital again runs out of space. Further properties are bought and in 1880, a new Hospital is planned in two phases. The first phase, Powis Place Pavilion, is built in 1881 at a cost of £10,000 (demolished in the 1990’s to make way for the current Chandler Wing) The second phase, opened in 1885 is the Albany Wing, built at a cost of £60,000. This is the Hospital building facing the Square today. The two buildings combined contained some 170 beds, were famed for their design, and were described as the “first hospital erected in this country on truly artistic lines”. The Hospital was also

On display: A clock from the Lady Almoners Office circa 1900. In the photograph, the Lady Almoner is arranging for a patient to be transferred to the Finchley Convalescent Home. Shrapnel from a bomb dropped on Queen Square from a German Zeppelin on the evening of Wednesday September 8th, 1915. Photographs, images and plans of the Hospital buildings. Damage to the Hospital during WW II. Plans and drawings of Powis Place and Albany Wing circa 1885. Interiors of the Hospital, circa 1885-1948.

The board invited two physicians to join the staff as honorary consultants: Dr. Jabez Ramskill and Dr. Brown-Sequard. These formed the first medical staff. Items in the first minute book of Board of Management record other early appointments:

Cook & Porter (husband & wife) after a weeks probation be engaged. £25 pa. Washing 1 shilling per week for the porter, plus 2 pints of beer a day, 1 shilling a week washing for the cook.

It was also resolved to appoint a female nurse for the male ward, age not younger than 45, salary not more than £14 pa, plus £2.11 for tea and sugar, and £1.4 for washing per annum.

It was resolved that Mr CJ Smith FRCS of St Thomas’s Hospital be and is herby approved Resident House Surgeon during the pleasure of the Board and that he do receive rations but no salary.

On display: Sir Victor Horsley’s successful application for the post of Assistant Surgeon, January 1886. His referees included Jean-Martin Charcot, whose testimonial is shown. Sir Victor Horsley was the first to remove a spinal tumour, at this Hospital in 1887.

For more information about the Library, museum and archives at Queen Square, and for details of our services and future exhibitions, please see: www.ucl.ac.uk/ion/library or Find us on Facebook.