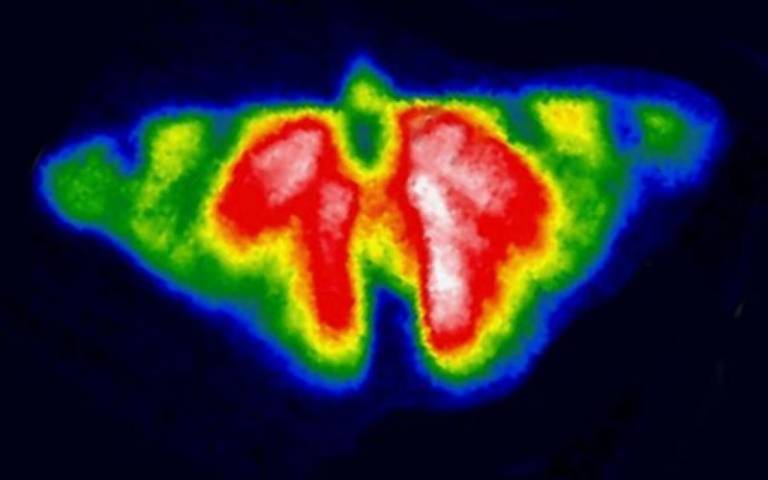 Papillon features 20 thermal images of butterflies which colourfully show the energy given off by the insects after basking in the sun, and examine the link between pigmentation and temperature regulation.

Professor Riley (UCL Division of Infection & Immunity), was inspired to create the artwork after noticing the basking behaviour of butterflies whose wings extended whilst they were enjoying the sun.

Intrigued by this behaviour, he wondered if the insects were warming themselves to increase the release of pheromones from their scent glands and decided to take some thermographic pictures.

Professor Riley said: “Whilst on holiday last summer, I noticed some butterflies spent long periods basking in the warm sunlight and was stimulated to see if there was a thermal response that could be observed using my thermographic apparatus.

“Over a period of four very sunny days I took a series of images from a focal distance of about 10cms from the sessile butterflies. Although it has long been known that butterflies are able to absorb heat from the environment, I was surprised to find that the apparent thermal response to sunbathing was influenced by the pigmentation pattern of the wings.”

This was particularly marked in the case of the Red Admiral (Vanessa atalanta) butterfly, where the heat absorbed from the sun (infra-red radiation) was most efficiently taken up by the black pigment (melanin) in the wing pattern.

“I find the images both meaningful and attractive and I hope this visual excitement is appreciated by others,” he added.

The equipment used to take the photos consisted of a thermal imaging camera, which Professor Riley was able to plug into his phone and had an array of 206 x 156 pixels with a thermal detection range of between -40 to +330 degrees centigrade with a 36 degree view.

The recorded images were then processed using software and colour filtration to explore the nuances inherent in the symmetrical chromatic images obtained from thermographs of butterflies.

The Papillon prints are available to view and buy on the Artelectrico website, the prints will also be on display at the Coningsby Gallery from 16th to 21st February.