ICCS demonstrates wireless connectivity for next generation Internet of Things

Dr Tongyang Xu, a senior research associate in the Electronic and Electrical Engineering Department, has demonstrated a new method of wireless connectivity to support the next generation of the Internet of Things. 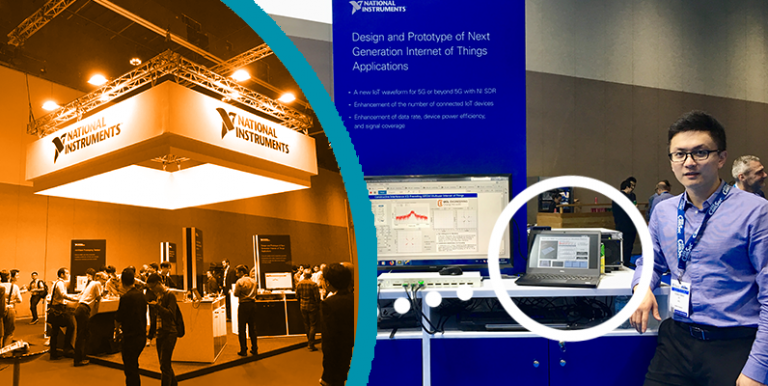 Dr Tongyang Xu has presented a prototype method of wireless connectivity developed by members of the Institute of Communications and Connected Systems to support the next generation of the Internet of Things.

The Internet of Things (IoT) has become pervasive within many areas of industry and consumer electronics with the number of applications increasing at an exponential rate and many suggested applications having mission-critical importance.

To address the growing demands of IoT the next generation of this technology deployment must be able to support massive numbers of device connections, increased reliability, enhanced power efficiency, long-range communications and higher rates of data transfer.

The demonstration presented by Dr Xu, a senior research fellow in the Department of Electronic and Electrical Engineering, displayed how a proposed new form of radio-wave, termed 'spectrally efficient frequency division multiplexing (SEFDM)', could address the connectivity demands of future generations of IoT technology.

The new form of radio wave was originally proposed by ICCS director Professor Izzat Darwazeh and has been developed for several use-cases within Institute research projects, including applications for 5G and beyond.

The waveform has multiple benefits which make it suitable for next-generation IoT:

In addition, the demonstration also employed state-of-the-art methods to enable multiple signals to travel constructively through the air by analysing their variations with time and making sure they are transmitted at optimum time windows. This method, known as a constructive interference precoding strategy, has potential use in applications for communication technology beyond 5G.

The demonstration was received well by those attending the GLOBECOM conference at which thousands of participants from academia and industry attended to present state-of-the-art research and share new ideas.

National Instruments, a producer of automated test and measurement systems is a long-term collaborator with UCL and invited the ICCS team to present the demonstration at GLOBECOM. The company which produces test and measurement systems have worked with ICCS on two recent EPSRC funded projects, and their software defined radio platform was used in the production of this next generation IoT demonstration.

The creation of the demonstration was supported by UCL Innovation and Enterprise through an EPSRC funded Impact Acceleration Award, "Development and testing of a pre-commercialisation prototype of an Electronically Steerable Parasitic Array Radiator (ESPAR) transceiver".

Further information on the SEFDM waveform and techniques used within the demonstration can be found in the following papers: