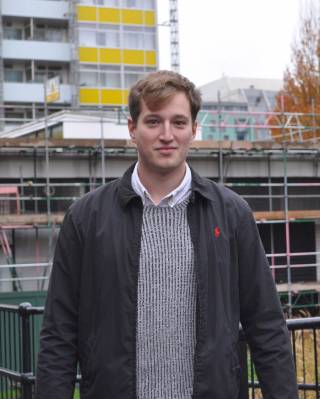 Yiddish in Britain: Immigration, Culture and the East End

William is researching late 19th and early 20th Century British Jewish History, examining primarily Yiddish language sources. At the end of the 19th Century and at the beginning of the 20th Century approximately 120, 000 Jews from Eastern Europe migrated to London. This community produced a wealth of documents in the Yiddish language: newspapers (hundreds, some daily, some weekly), literary journals, novels, poetry, gallery documents and theatre documentation. The scholarship that has examined this community and has used its own writings in the Yiddish language as sources has focused almost exclusively on its connection to radical politics and the theatre. The writing and cultural production of these immigrants themselves, and how they articulated their experience of Britain and of immigration in these years has been seriously under-researched. William is also interested in placing this local history in the context of wider transnational (Jewish) movements of the period, be they socialist, zionist, yiddishist or other.

Building on his MA dissertation (2016) into the Yiddish literary and artistic journal Renesans, written and published in London's East End in 1920, William's doctoral research aims to examine these lost perspectives to produce a critical cultural history of this immigrant community's experience of immigration and its associated issues: anti-semitism, ghettoisation and assimilation.

William was awarded an LAHP Doctoral Scholarship (2017-2020) to pursue this project and was a previous Hyman Hurwitz studentship holder at UCL (2015-16).

William recently completed research semesters at the Hebrew University (summer 2019) and Yale University (winter 2019). He has also worked as a postgraduate teaching assistant teaching Jewish Muslim Relations, the Israel Palestine Conflict and the Modern History of the Middle East in collaboration with the UCL History Department.

Tribune: Israel’s Left at a Crossroads

Vashti Media: Will the last Jew to leave Europe please turn out the lights?