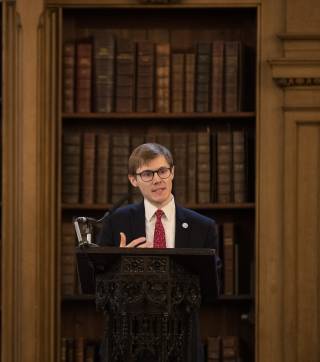 Rob’s research explores how Christians responded to the Holocaust and engaged with Holocaust survivors in its immediate aftermath. Amongst the many witnesses to the liberation of the concentration camps and the relief workers who encountered survivors and Displaced Persons, were Christians: army chaplains with the liberating forces, church-based relief organisations, clergy active in the Allied military governments, and those involved in interreligious relationships in Germany.

Building on his MA research into the roles and responses of British Christian army chaplains at the liberation of Bergen-Belsen, Rob’s PhD undertakes a wider study across the British, American, Canadian, and German experiences. He asks how Christians bore witness to and articulated Jews’ experiences of the Holocaust; how they understood Jewish testimony and the experiences of survivors in the post-war years; and how their Christian faith was impacted as a consequence. The first study to explore immediate post-Holocaust Jewish-Christian interaction in this context of Allied, Jewish, and German relationships, Rob’s research aims to clarify our knowledge of the encounters, stories, and ethical implications upon which the Holocaust could first begin to be understood.

Before beginning his PhD, Rob worked as Senior Programme Manager for the Council of Christians and Jews (CCJ), the UK’s leading forum for Jewish-Christian relations. During that time he undertook his MA in Jewish History and Culture part-time at the University of Southampton. His MA thesis was named Proxime Accessit for the Royal Historical Society’s Rees Davies Prize 2020. He has a BA in History and Politics from the University of Oxford.

Rob’s research is funded by a Wolfson Foundation PhD Scholarship.