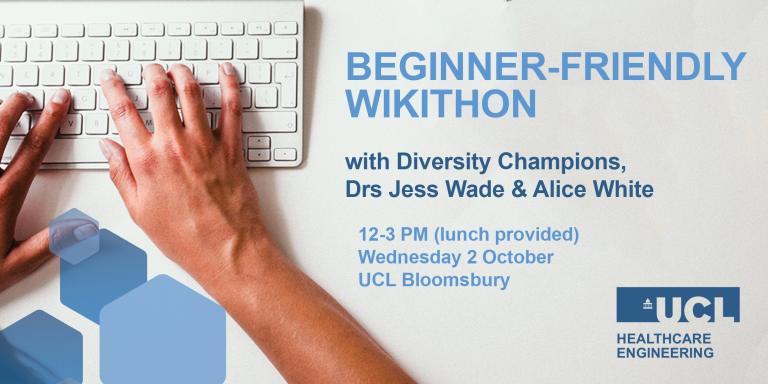 The event is open to all staff and students at UCL. It is totally beginners-friendly and will include editing instructions from Wiki-experts.

Join us for a talk by Dr Jess Wade followed by UCL’s very own ‘wikithon’ and guidance from Wikipedian Dr Alice White!

Our beginners-friendly wikithon aims to diversify Wikipedia by creating pages for deserving scientists and engineers who are women and/or from other under-represented groups.

We are focusing on these groups because the scientific field is still overwhelmingly homogenous. People from minority groups face a number of extra hurdles when pursuing an academic career – from passive societal stereotypes to infrastructural biases to overt discrimination.

By helping more people realise that a career in STEM is possible for them, we broaden the range of scientific talent and improve the field for all. Diversity in science ultimately leads to better science.

Jess completed an MSci in Physics at Imperial College London before undertaking her PhD. She is now working as a post-doctoral researcher on chiral organic light-emitting diodes.

Jess is well-known for her efforts to diversify the representation of scientists on Wikipedia. After learning 90% of Wikipedia editors were men and 18% of people with entries were women, she began writing a Wikipedia entry a day. She has now written more than 400 pages and holds ‘edit-a-thons’ where people can make their own contribution to the website’s diversity.

Aside from her work on Wikipedia, Jess regularly acts as an ambassador for inclusivity in science – tweeting to her 32,000 Twitter followers, speaking at conferences and with the media, and carrying out other public engagement activities.

Dr Alice White is an expert Wikipedian and historian of science. She currently works as Digital Editor at the Wellcome Collection. She is experienced in hosting Wikithons all across the country and encourages participants to learn better referencing, content-creation and reliability of sources.

In her role at Wellcome Collection she focuses on digital engagement and works with researchers, librarians, tech experts and anyone else who's interested to help make knowledge more widely available of Wikimedia (Wikipedia, Wikidata, Wikimedia Commons).

What is a Wikithon (or edit-a-thon) and why participate in one?

Who meets the criteria for a Wikipedia page?

What counts as a reliable source?

What counts as an independent source?