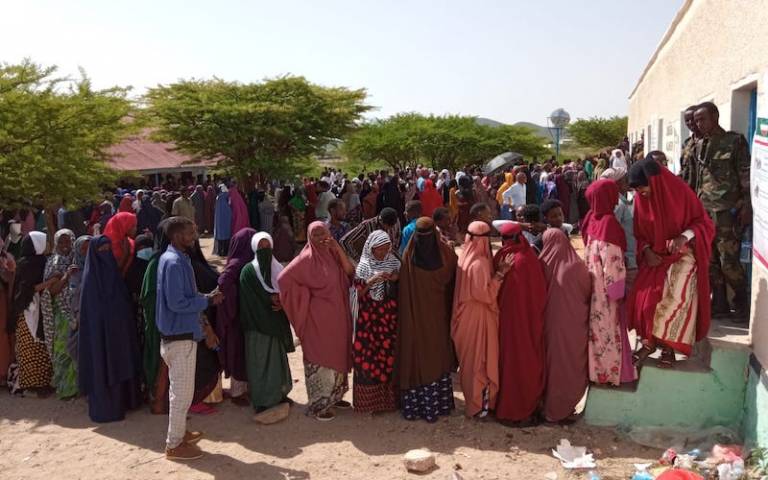 It was the first time that national and local elections were held together, marking an important moment for the sovereign state’s progress along the democratic path.

The mission’s final report was released earlier this month during a livestreamed event, which is available to watch here. The report details LIEOM’s findings and recommendations related to the electoral process.

Despite significant delays to both polls due to the COVID-19 pandemic and infrastructure limitations, the report details many positives including the election of a member of a minority clan to parliament, improved electoral law and generally balanced media coverage.

Most importantly, election day and its aftermath proceeded peacefully, was accepted as credible by stakeholders and Somalilanders turned out enthusiastically to vote.

However, the report identified aspects of the electoral process that require improvement to reach international standards, noting that the voter registration process is complicated and, in the absence of a census, cannot ascertain what proportion of the possible electorate is registered to vote.

The mission calls for three profound changes: reform of the restrictive political system in which only three political parties are permitted to contest elections, which severely curtails democratic representation; Somalilander-led legislative measures to ensure female political representation; and political re-commitment to the agreed constitutional electoral timetable so that future elections are held on time, banishing the long tradition of electoral delay in Somaliland to the past.

LIEOM’s Chief Observer and Director of UCL’s Development Planning Unit, Professor Michael Walls, said: “While these elections represent democratic progress, they were held 11 years after the originally envisaged expiration of the parliamentary term, and more than three years after council elections were due. It is good news that they were peaceful and accepted as credible by stakeholders.

“However, uniquely in Africa, not a single woman was elected to Parliament. This is a serious democratic deficit, even marking a step backwards from past, already low, levels of female representation. While it is cause for celebration that Somaliland has continued to hold elections, it is also time to focus on seeking ways to strengthen the procedures in place for the next poll, due in 2022 and those that take place after that.”

The mission’s final report also makes a number of additional recommendations, including enhancing voter education and the secrecy of voting, better training for polling station staff and an improved system for counting and tabulation of votes.

Professor Walls led the LIEOM team, which was organised by DPU with support from the Westminster Foundation for Democracy and UCL Consultants providing project and logistical management.

LIEOM was invited by Somaliland’s National Electoral Commission (NEC) and funded by the UK Foreign, Commonwealth and Development Office, but is independent of Somaliland’s authorities and the UK Government.

The impartial team of 12 international observers represented Egypt, Ethiopia, France, Germany, New Zealand, South Africa, UK, US and Zambia. They observed the electoral preparations, election day, and voting, counting and tabulation of results in locations across Somaliland including Hargeisa, Berbera, Burao and Borama.

International election observation missions are usually carried out by non-governmental regulatory bodies such as the European Commission and the Carter Centre, but because Somaliland is not currently recognised internationally as a country, UCL fulfilled this key role.