A UCL-led team is playing a critical role in ensuring that representative democracy prevails during key elections in the sensitive area of Somaliland in the Horn of Africa. 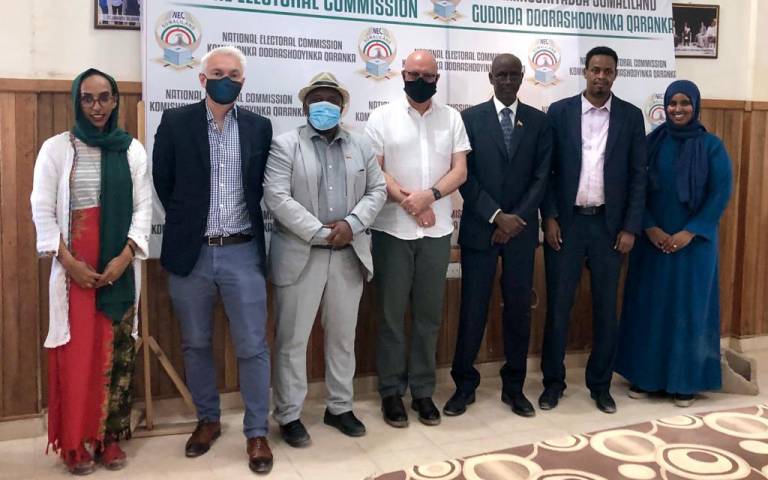 A group of impartial observers, led by Professor Michael Walls, Director of UCL’s Development Planning Unit (DPU), will monitor the parliamentary and local council elections taking place on 31 May 2021 at which 1.2 million people are registered to vote.

International election observation missions are usually carried out by an organisation such as the European Commission, the OSCE (Organization for Security and Co-operation in Europe) or the Carter Centre, but because Somaliland is not internationally recognised as a country, UCL is fulfilling this key role with funding from the UK Foreign, Commonwealth and Development Office.

Observation missions help enhance transparency and accountability during elections, highlighting any issues or malpractice they witness, making recommendations on how electoral processes might be strengthened.

Somaliland is an autonomous region in northern Somalia, which declared, in 1991, that they were restoring the sovereignty they briefly enjoyed on gaining independence from Britain in 1960. On 18 May, Somalilanders took to the streets to celebrate 30 years since that unilateral restoration of independence.

While its sovereignty is not officially recognised internationally, including by the African Union and United Nations, Somaliland remains self-governing. Alongside an independent government and democratic elections, the state has its own currency, military and passports.

Professor Walls’ research focuses on state formation and political representation and he has previously held key roles in Somaliland election observation, including as chief of mission for international observation of the presidential elections held in November 2017. This saw the DPU assemble 60 observers from 27 countries at the invitation of Somaliland's National Electoral Commission.

For this year’s mission as for that of 2017, UCL Consultants have provided project and logistical management.

Observers monitor, gather information and report on elections, whilst maintaining strict independence, impartiality and professionalism. Participants are trained to avoid interfering in the electoral process, but to report accurately and methodically.

Professor Walls said: “Election observation is needed in Somaliland because electoral processes everywhere tend to be the cause of a lot of tension. People are competing for different agendas. The fact Somaliland is not recognised as a country internationally means it’s even more important.

“It can deal with things in a way that other missions cannot due to their constraints. We can put people on the ground to move as far as possible through the country before and on election day and see the process of campaigning and counting as well as voting. It means we’re able to offer recommendations to the electoral commission and contextualise that locally.”

On election day, the team monitors the opening and closing of polling stations in urban and rural locations, the vote cast, and counting processes.

Following the vote, they monitor how any complaints are dealt with by the election administration and the judiciary.

Their impartial findings are made public in reporting issued after election day.

Professor Walls added: “With fake news circulating so freely in social media today, the role of election observers everywhere is doubly important in offering a clear, methodical perspective on how the election campaign, voting, tallying and declaration of results actually proceeded. Somaliland is no different in that way: having that external perspective is vitally important.”

For the 2017 presidential election, the DPU-led mission observed 355 polling stations across all six regions of Somaliland. Somaliland's third presidential poll and sixth election overall, was won by Muse Bihi Abdi of the Kulmiye party, defeating the two opposition parties. The team produced the report The limits of consensus? following the election.

To minimise Covid risks, this year’s limited international election observation mission (LIEOM) will be undertaken partially remotely. A small in-country presence, including Professor Walls, will spend a period in-country prior to and including election day.