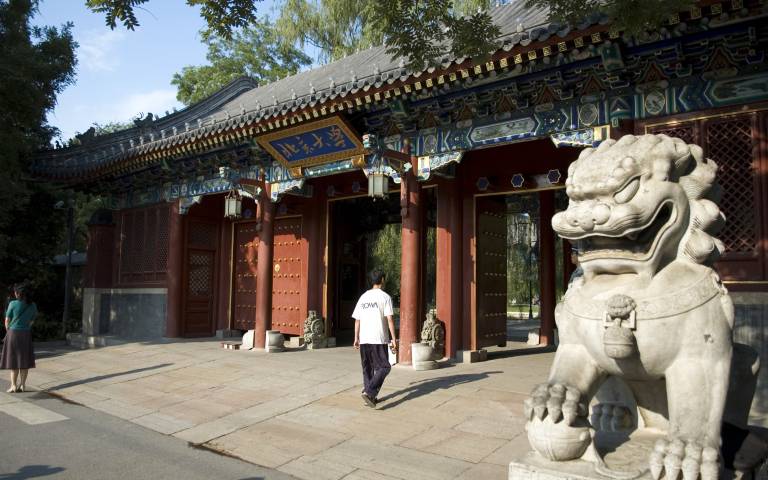 Now in their second year, the latest winners of the UCL-PKU Strategic Partner Funds have been revealed, with winning projects drawn from diverse research areas including decision neuroscience, economic regulation and artificial intelligence (AI).

The annual funding opportunity offers up to £10,000 per project to UCL academics collaborating with colleagues based at PKU, as part of the deep strategic partnership between the two institutions.

This year, the proposals were once again assessed by a selection panel chaired by UCL’s Pro-Vice-Provost for East Asia, Professor Katharine Carruthers. The panel received such a high volume of strong applications that they decided to fund more than in the inaugural round – a total of 14 collaborative projects across seven faculties.

Lizzy Deacon, UCL’s Senior Partnership Manager for East Asia, was part of the panel. She said: “It was wonderful to receive so many high quality applications this year which demonstrate the breadth of our partnership with PKU.

“Many of the projects’ intended outcomes will have truly global impact and we look forward to watching the collaborations deepen even further in the future.”

Among the recipients of this year's funding is Professor Therese Hesketh, Director of Teaching and Learning for the Institute of Global Health. She and her co-applicants will be working with Professor Wang Hong Man, from the Centre for Global Health and Social Development at PKU, on an advisory report about the Chinese Government's global health input to the Belt & Road Initiative.

This ambitious foreign policy was launched by the Chinese government to boost trade and stimulate economic growth across Asia and beyond.

"Initially, we will supervise the collection, collation and interpretation of relevant documents and literature. We will then hold a workshop for the key players in global health and the government representatives of the B&R strategy, and produce a report with recommendations for a global health strategy for selected B&R countries," Therese explained.

"The money from the PKU funds will make all this possible, and we envisage long-term benefits for PKU and UCL," she added.

Maria Chait, Professor of Auditory Cognitive Neuroscience at UCL, is another of the successful 2018 applicants. Her group’s collaboration will work towards answering one of the biggest questions in cognitive neuroscience today: ‘Is perception governed by periodic sampling processes?’

Explaining her project, she said: “Professor Huan Luo, from the School of Psychological and Cognitive Sciences at PKU, and I are setting up a project to understand how the human brain samples and represents our acoustic experiences.

“The work will involve behavioural and functional brain imaging work and will be conducted across both our labs. We’ll use the funds for travel - for a team from my lab to go to Luo-lab, and vice versa.”

Professor Francesca Cacucci’s group at UCL has been studying spatial memory by combining new technologies such as virtual reality and neuroimaging with traditional in vivo electrophysiology.

Her co-applicant, Senior Research Associate Dr Guifen Chen, explained: “The main focus is to understand neural mechanisms of spatial cognition and memory, and try to shine a light on the potential dysfunction in diseased brains.

“The funds will be used to organise a joint seminar with PKU. We’re hoping to foster new collaborations with other labs in PKU, and potentially other labs outside of PKU in China.”

Several of the winning applicants were successful for the second year running. Professor Nick Greene will continue the collaborative work he has been conducting with colleagues at PKU to develop preventative strategies for Neural Tube Defects (NTDs), such as spina bifida, while Professor Fulong Wu will continue his work with PKU’s College of Urban and Environment Sciences around sustainable urban solutions.

Congratulations to all the successful applicants: