Art biennales, which are large-scale international exhibitions that run every two years, provide an opportunity to bring together artists and curators from around the world to engage in discussions around contemporary art. Making global connections was a key priority for artist and the Slade School of Fine Art Professor Andrew Stahl when he attended the first ever Bangkok Art Biennale (BAB) in Thailand, which ran from October 2018 to February 2019.

“Biennales like BAB are held around the world and as well as being fascinating exhibitions they are a gigantic platform for global debate on contemporary art,” said Professor Stahl. “They facilitate important art world connections based on cultural exchange, not commercial considerations.”

Participating in the first BAB

The BAB exhibition, entitled “Beyond Bliss,” was initiated by the Thai former Minister of Culture Dr Apinan Poshyananda and took place in 20 locations across Bangkok. 75 artists were selected to present their work, 35 of whom were from Thailand and the rest from other countries. Professor Stahl joined artists such as Yayoi Kusama, Francesco Clemente and Marina Abramovich who also exhibited their artwork. 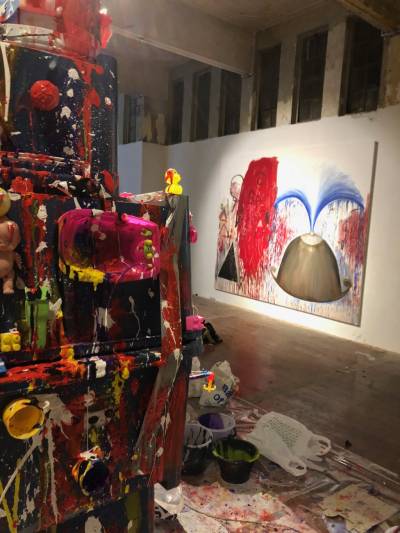 Professor Stahl brought two large paintings from the UK and included a third painting that had been purchased for a private museum collection in Thailand. He also made a large sculpture on site that referred to the flow of the Chao Phraya River. He used a variety of local materials and fragments from the city including wood from the river, abandoned plastic crates and second-hand toys from a riverside market. The sculpture and paintings were displayed in the historic East Asiatic Company building, which overlooks the river.

“This romantic location connected my work to the river, enabling reflection on how the river can echo the flow of thought,” said Professor Stahl.

Biennales not only provide a platform for discussion around contemporary art but also around wider themes of transcultural understanding, appreciation and cooperation. At BAB’s numerous events, public engagement activities, panel discussions and art tours, Professor Stahl and other artists spoke about their work and cultural influences.

“It was a really social experience with fascinating encounters and debates,” said Professor Stahl. “There were endless opportunities to engage with the exciting and varying cultural approaches of different artists and the art discourse.”

The vibrant and social atmosphere was also an opportunity to further establish the Slade School of Fine Art’s links to the art scene in Bangkok. For example, following conversations during the exhibition’s opening week events, Professor Stahl was invited to give a lecture at Bangkok University about his work and the Slade’s contributions to international contemporary art.

Professor Stahl attended BAB with support from UCL’s Global Engagement Funds (GEF), a seed funding scheme that supports UCL academics in collaborating with colleagues across the world. He received just under £2,000 from GEF, which along with support from BAB helped him to travel and participate in the exhibition. New artistic collaborations have since developed with the contacts he met there, including the participation of a Thai curator in an upcoming exhibition Professor Stahl is curating.

The upcoming exhibition will be the fifth in a series entitled Monologue Dialogue (MD). Professor Stahl has both participated in and curated the last four exhibitions that took place in Bangkok and London with funding from the British Council among other sources. MD’s network of participating international artists continues to evolve and expand; MD5 is intended to take place in August 2021 with around 20 international artists at the Bangkok Art and Cultural Centre in Thailand.

The lasting connections Professor Stahl made with a number of artists from BAB also hold the possibility for future artist residencies on UCL’s Bloomsbury campus through the Slade’s Transcultural Art Network.

“I’m so grateful to the Global Engagement Funds for helping to make it possible to attend BAB, which has led to many future and potential collaborations,” said Professor Stahl. “It was an amazing chance to meet artists and curators I might not have otherwise crossed paths with.”