Back From the Future: How to Reverse from Degrowth Utopia

How can we break out of familiar thinking patterns and imagine radically different futures? At a recent scenario workshop, a group of UCL students considered alternatives to the current economic system. 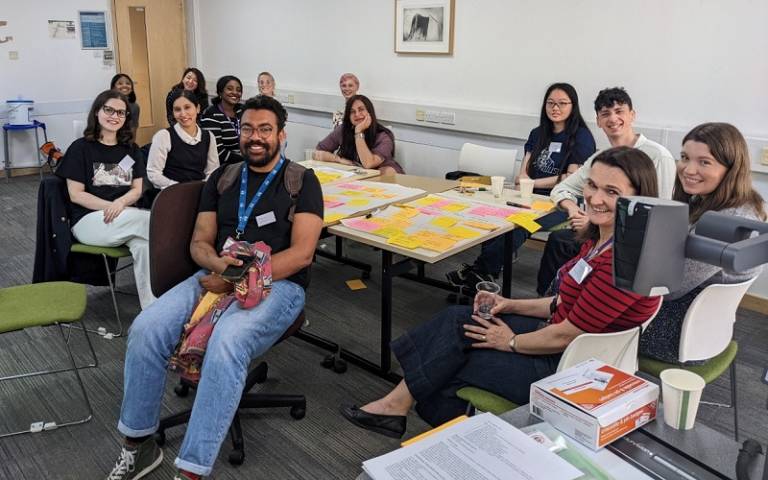 The tension between limitless capitalist growth and the finitude of earthly resources has become increasingly familiar. In part, this is due to growing awareness of planetary boundaries: they are the ‘STOP’ signs, sending a decisive message on environmental thresholds, volatility, and collapse. Yet, largely owing to lobbying efforts by polluting industries, we continue to treat these signs as ‘planetary hurdles’ rather than real limits on what the planet can support.

Unitil recently, many believed these environmental harms were justified by human advancement. Historically, industrialisation has increased gross domestic product (GDP) and lifted people out of poverty. Going forward, climate-conscious neoliberals are optimistic about an absolute decoupling of GDP and ecological harm (figure 1). In other words, hyper-efficiency, technological solutions, and sustainable energy can allow us to have our cake and eat it. The perfect economy could grow forever-after, serving humanity without bothering our planet. Move over grey growth; green growth is the future. Others are less confident that limitless growth can feature within the safe operating space of our planet. For some commentators, ever-growing resource extraction is an inherent capitalist harm. Indeed, despite 20+ years of implementation efforts, ‘sustainable development’ has largely failed to produce the ambitious win-win outcomes it once promised. It seems possible that ‘green growth’ will suffer the same fate, and yet the stakes are too high for yet another time-consuming oxymoron.

Evidently, we need to refresh our future planning methodologies – we need disruptive innovation. This was the premise of a scenario exercise, hosted on 28 June by researchers from the UCL Global Governance Institute (Tom Pegram and Julia Kreienkamp) and the UCL Institute for Sustainable Resources (Nick Hughes), which brought together a diverse group of UCL students. Rather than asking “what’s the best we can do within our current (and highly limited) circumstances?”, we shifted our perspective through a backcasting exercise (figure 2). 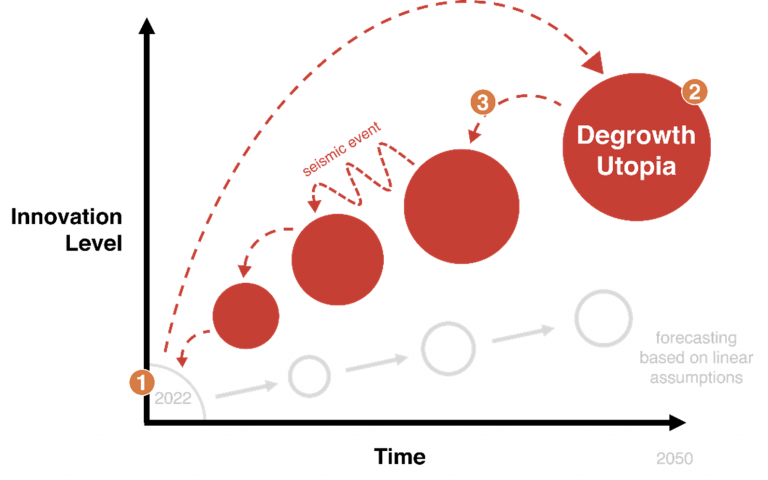 After analysing the current circumstances (Step 1), we imagined an ‘impossibly perfect’ degrowth utopia (Step 2). Through five themes, reality was contrasted against the ideal: production/consumption, work, living standards, money, and economic governance. Finally, in Step 3, we worked backwards from this utopia, asking ‘how did we get there from the current state?’ and speculated as to which key events or historical junctures enabled such radical change. We went through each of these stages in two separate groups, before reconvening to compare and discuss the results.

(1) Our diagnosis of the present was cynical: greed, material addiction, inequality, poverty.
(2) Our vision of the future  was blissfully absurd: peace, poetry, and plenty (think Big Rock Candy Mountain, but make it earth systems governance).
(3) Next, we bridged the gap…

So, we began with the finishing touches, first asking ourselves ‘what’s the final piece of the utopian puzzle?’. With each event, our attention was brought to the preconditions for positive change. For instance, a utopic world without exploitative labour requires a just transition to automation, which requires global trade unions, which requires global pluralistic assembly, et cetera (see image 1).

Attempts were made to ensure some plausibility. That said, imagining drastic transformation requires some imagination. Both groups were permitted one seismic event as a transformative catalyst. Our group opted for a Bitcoin-era Robin Hood: sometime around 2033, the global financial network is hacked, triggering a massive redistribution of wealth. Next door, Artificial Intelligence kindly offers its omniscience, with the caveat that its guidance exclusively supports young people and future generations (Vinay Gupta’s ingenious suggestion of stopping over-30s from voting came to mind). Suddenly, compared to these seismic events, abolishing capitalist exploitation felt less radical.

So, step-by-step, we had backpedalled all the way from Shangri-la to the 8th floor of the Institute of Education. Navigating our discussion ‘though the rear-view mirror’ was a challenge. Despite our varied backgrounds (Heritage Studies, Engineering, and Global Governance, among other disciplines), we each discovered that chronological thinking is a deeply engrained habit – not necessarily a bad one, but perhaps limiting. 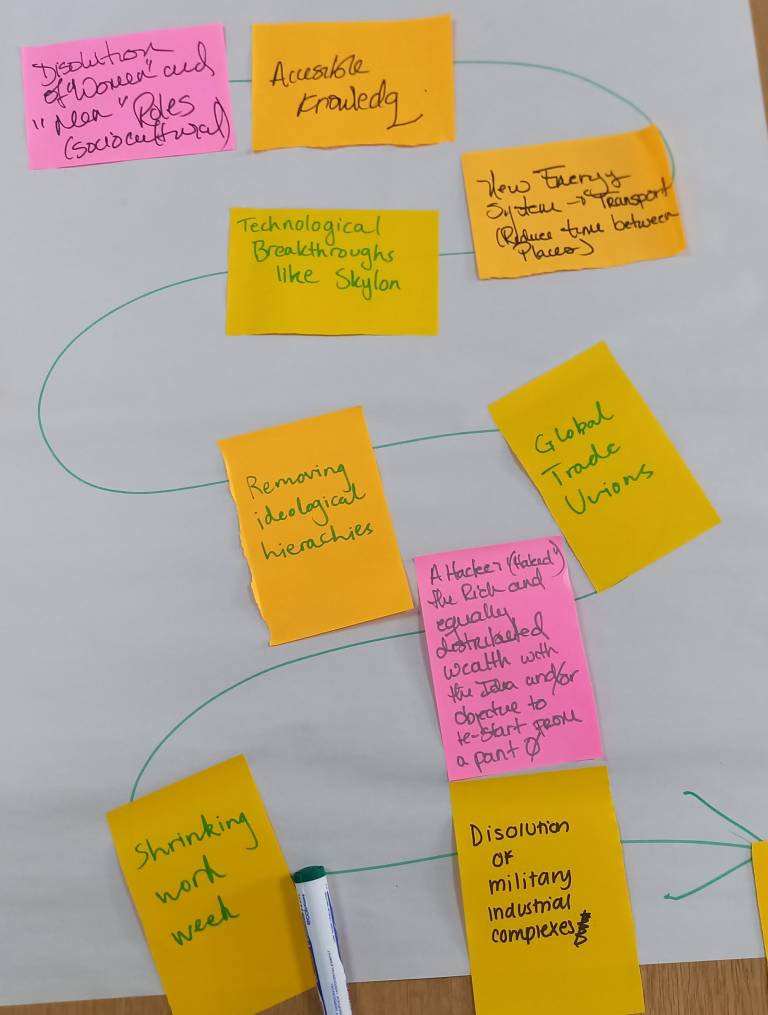 One student asked – quite rightly – ‘what’s been the product of this exercise?’. Despite the sprawling pieces of A1 paper (chock-a-block with post-it-notes covering everything from political micro-communities to Umberto Eco), the answer wasn’t clear. As an experimental pilot – somewhat ironically – its future remains uncertain. Pragmatically, we hope the exercise has pedagogical potential within Tom, Julia, and Nick’s teaching. In a broader sense, the exercise reminds us of the value of creative collaboration. Backcasting flips teleology on its head, uncovering radical possibilities within global governance and beyond.