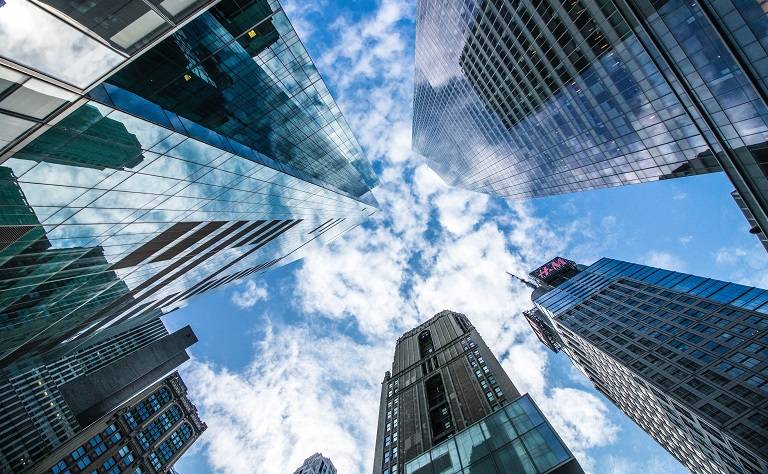 Corporate Social Responsibility (CSR) is now a mainstream concern for most businesses and large organisations. Traditionally, CSR has been understood as a strictly voluntary, business-led practice and relatively little attention has been paid to how public policies interact with CSR. However, government action is far from irrelevant for CSR. In fact, governments around the world are promoting, facilitating and shaping CSR, and increasingly do so on the international level.

Government-CSR Relations: Towards a 'Related' Perspective

At a recent GGI keynote lecture, Jette Steen Knudsen, Professor of Policy and International Business at the Fletcher School of Law and Diplomacy, called for a more systematic analysis of the various ways in which government policies interact with CSR initiatives. Drawing on insights from her latest book Visible Hands: National Government and International Corporate Social Responsibility (published with Jeremy Moon), she argued that the significance of government action for CSR is often underestimated. This is especially true for management scholarship, which tends to treat regulation and CSR - either explicitly or implicitly - as dichotomous. From this perspective, CSR encompasses strictly those social and/or environmental business initiatives that exist in addition to or go beyond legal requirements. If governments move to regulate these initiatives, they are no longer considered CSR. In contrast, Knudsen suggested moving towards a 'related' perspective that appreciates governments' (limited) agency in shaping domestic and international CSR activities. Acknowledging that CSR does not take place in a regulatory vacuum, this perspective refocuses attention on the interactions between different types of public policies for CSR.

Increasingly, governments formulate policies that directly address specific CSR initiatives. Research by Knudsen and others suggests that government regulation of businesses' social and/or environmental activities is on the rise as well as shifting in focus, from the domestic to the international level and from softer to harder forms of regulation.

On the 'softer' end of the spectrum, governments can endorse or facilitate CSR by providing general political support and creating incentives for companies to adopt certain CSR initiatives, for example through subsidy schemes or tax incentives. Increasingly, governments also partner with businesses to develop and/or maintain CSR standards and disseminate knowledge. Finally, governments can adopt 'harder' policies to mandate business behaviour, although these policies usually do not establish detailed requirements for compliance or penalties for non-compliance.

To illustrate how these different types of policies for CSR interact on the domestic and the international level, Knudsen used the example of the Extractive Industries Transparency Initiative (EITI), a global standard for good governance in the oil, gas and mining sectors. EITI's key aim is to increase transparency of payments made by the extractive industries to host governments in order to expose corruption and hold governments accountable for the management of tax revenues. The standard is implemented on the national level by accredited EITI member countries. Once a country endorses EITI, compliance with the initiative's principles is mandatory for all oil, gas and mining companies operating within that country.

Direct support for EITI has come from various governments, notably the UK, which, through the Department for International Development (DfID), first initiated EITI in 2002/2003 and administered the initiative in its early years. Since then, EITI has developed into a global multi-stakeholder initiative based in Oslo and supported by the Norwegian government. National governments have thus been key actors in initialising and maintaining EITI.

In addition, EITI has been indirectly supported by two regulatory initiatives: Section 1504 of the Dodd-Frank Wall Street Reform and Consumer Protection Act in the US and the revised EU Accounting Directive. The Dodd-Frank Act was signed into law in 2010, as a response to the 2008 financial crisis, and aims to improve accountability and transparency in the financial system. Section 1504 focuses specifically on 'Payments to Governments by Resource Extraction Issuers' and requires all extractive industry firms listed on US stock markets to disclose project-level payments to host governments. In the EU, new disclosure requirements for the extractive and forestry industries have been incorporated into the existing Accounting Directive in 2013. These amendments were made in direct response to the inclusion of Section 1504 in the Dodd-Frank Act and are in alignment with EITI guidelines.

In short, EITI has received both direct support from national governments as well as indirect support through regulatory initiatives which address the wider issue of transparency in these sectors. EITI has informed the framing of Section 1504 of the Dodd-Frank Act as well as the amendments of the EU Accounting Directive. At the same time, both regulatory initiatives have informed the strengthening of EITI and promoted further adoption of the standard. These interactions and the 'dual agential' role of national governments are illustrated in Figure 1. 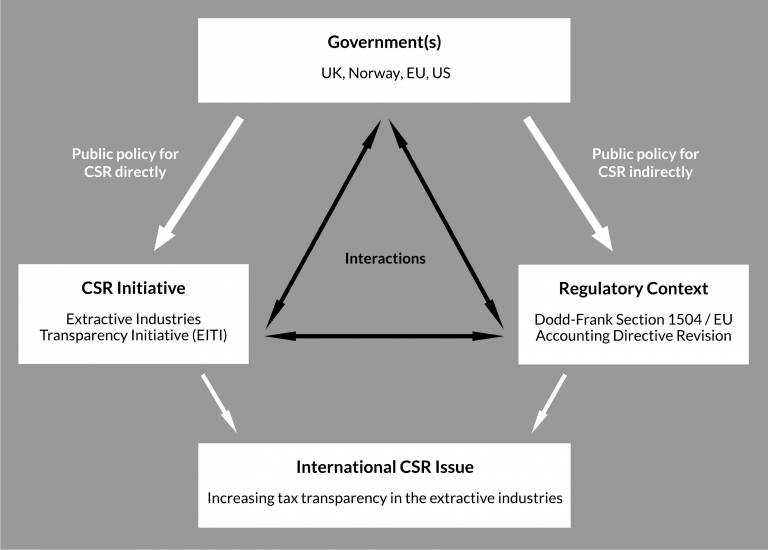 Knudsen's research challenges the wide-spread view that governments play only a limited role in CSR. It also calls into question arguments that globalisation has stifled policy makers' capacity with regard to regulating transnational businesses. However, this does not mean that governments 'orchestrate' international CSR. Rather, Knudsen suggested, the process through which international CSR is shaped can best be understood as a 'jazz' performance, where different players build on each other's contribution and take turns in taking the lead or supporting the rest of the ensemble.

While this provides a useful framework for studying the role of governments in international CSR, a number of questions remain: Why do governments make public policies for CSR? When do they choose to move from 'softer' towards 'harder' forms of regulation? What explains national variation? Do different types of public policies for CSR necessarily reinforce each other or are there also examples of conflict, tension and incompatibility?

Finally, the framework introduced by Knudsen does not (claim or intend to) tell us much about the actual outcomes of CSR initiatives and public policies for CSR. For example, will EITI and regulatory initiatives for tax transparency in the extractive industries actually deliver accountability and fiscal responsibility? Can non-financial disclosure obligations - such as the UK Modern Slavery Act - increase societal trust and drive corporations to invest more in CSR? Determining whether, when and how CSR can make a real difference and how government policies can support this goal will remain a major challenge for CSR research more broadly.

Jette Steen Knudsen is Shelby Collum Davis Professor of International Business at the Fletcher School of Law and Diplomacy, Tufts University. Her research centers on the interface between government regulation and business actions.

This event was co-hosted by the UCL Global Governance Institute (GGI) and the UCL Centre for Ethics and Law.

Watch a video of Professor Knudsen's keynote lecture and explore recordings from other GGI events.