Academics specialists in EU and national environmental law met at the end of May in Riga, Latvia for the annual meeting of the Avosetta group of lawyers 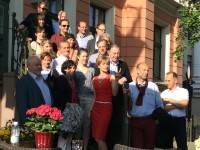 Professor Macrory was one of the founding members of Avosetta when it was launched in 2001, and attended the Riga meeting.

This year’s meeting was focussed on national procedures for authorising major installations and infrastructure, set in the context of EU environmental law.  Papers also considered the extent to which Member States had introduced procedures to speed up decision-making. This was set against the context of the EU Commission’s current regulatory reform programme including REFIT and the Make It Work, an initiative of some Members States designed to improve the effectiveness of EU environmental law.

Papers presented at the meeting, which include national updates of significant recent legislation and case-law, will soon be available on the Avosetta web-site together with general lessons and conclusions which will be sent to the European Commission.