The benefit of art, music and dance for people with Parkinson’s disease was explored by UCL, Central Saint Martins and English National Ballet (ENB). 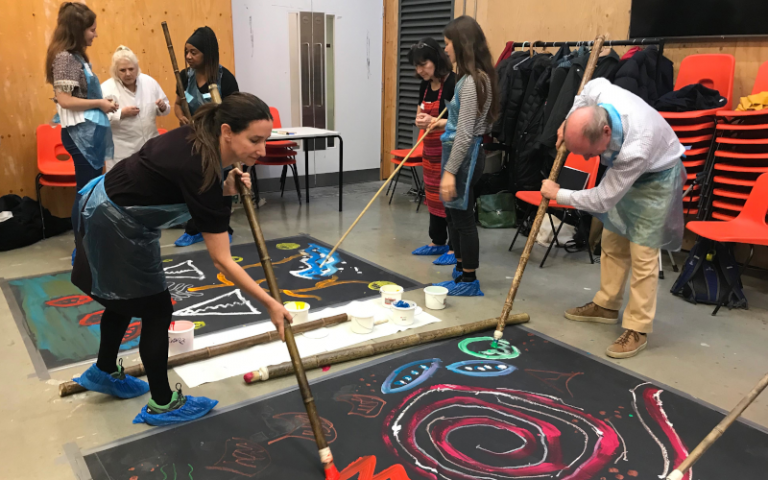 The ‘Patterns of Perception’ project involved a series of workshops over three weeks in 2019. People with Parkinson’s disease explored dance, music and visual arts and shared their personal experiences.

“The project set out to improve the perception of what living with Parkinson's is like,” said Dr Christian Lambert from the UCL Queen Square Institute of Neurology.

“Many people are aware of individuals with the condition, but have quite a catastrophic view of what the illness is. The lived experience is very different and people have this condition for very long periods of time.”

UCL is a strategic partner of the ENB, a relationship that has seen UCL engineers undertake secondments at the ENB and the creation of a Dance Network.

Last summer, a UCL delegation visited the ENB’s new state-of-the-art home at London City Island, to discuss ways of working together in the collaborative space.

That facility played host to some of the activities of Patterns of Perception, including visually responsive ballet. Collective textile painting and other activities took place at Central Saint Martins. The activities were planned by the partners and some of the participants.

Artist Ruairiadh O’Connell ran one of the workshops. Taking inspiration from Akram Khan’s Giselle at the ENB, Ruairiadh created giant bamboo tools to enable participants to use their whole body to paint creative expressions. These motifs and symbols created a visual vocabulary to communicate the Parkinsons’ experience.

Dr Rimona Weil is a Clinical Scientist and Consultant Neurologist at UCL Dementia Research Centre. As well as caring for patients with Parkinson’s disease, she runs a research programme to look at how individuals with the condition differ from each other.

As part of Patterns of Perception she oversaw an activity where participants drew spirals while listening to music.

“Many people commented that their spirals were much smoother than when they draw them in the clinic. There's so much that we don't understand yet about how music and how movement interacts with degenerative disease,” said Rimona.

“It's been such a positive experience being part of this project and I've learned so much.”

Following the public engagement award, the partners hope to develop an online resource to share what it’s like to live with Parkinson's.

Christian said: “The amazing thing about the project is that it wasn't in a medical environment in the hospital. Reaching out, going into communities, setting up programs like this closer to where people live, and forming these groups and links between other individuals in similar circumstances, is really important.”

Patterns of Perception was made possible by funding from the UCL HEIF Knowledge Exchange Fund.

“Without bringing together such a diverse group of interdisciplinary partners, it’s unlikely we would have seen the enriching and fascinating outcomes which have been achieved with this project,” said Dr Kathryn Walsh, Director of Knowledge Exchange Policy & Practice at UCL Innovation & Enterprise.

“We would like to thank Central Saint Martins, Ruairiadh O’Connell and the English National Ballet and look forward to working together in the collaborative space again.”

Watch a video about the Patterns of Perception project